In the summer of 1863, Colonel Arthur Fremantle travelled through America at the height of the country’s violent Civil War. Almost 140 years later Tom Fremantle strode off in his swashbuckling ancestor’s footsteps to walk the 2,700 miles from Mexico to Manhattan in the wake of 9/11.

In many ways, their journeys could not have been more different. Colonel Arthur rode on stage coaches, steam trains and Mississippi river skiffs while his less sensible descendant slogged the entire way on foot. Colonel Arthur flirted with saucy belles; Tom Fremantle kept company with a 17-year-old mule called Browny.

The Colonel ate skunk meat and was arrested twice as a spy before witnessing the devastating Battle of Gettysburg and sailing home from New York. The 21st century Fremantle ate grits, spent time with the Amish and was chased by a buffalo before leading the hapless Browny over George Washington Bridge into Central Park. It’s about two men, two contrasting worlds and an ornery but heroic beast of burden.

‘In a book that traverses the landscape of the Civil War, frontiers – geographical and otherwise – are deliciously explored by Fremantle’s witty hand. With prosaic eloquence he moves from humour to seriousness throughout the journey…the book is a testament to the breadth of the author’s view.’ Wanderlust 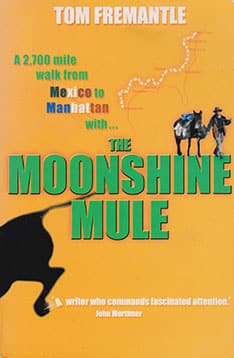