The Man Walking Around The World – Tom Fremantle

Meet Tom Fremantle, an author, and adventurer from England, who, now in his early 50s, decided he wanted to walk around the world.

“I know it’s quite a challenge,” said Tom. “But I believe it’s doable and wants to give it my best shot.” More than anything, Tom wanted to explore the kindness that exists in the world and, of course, his love of walking and the great outdoors.

“Sadly, humans are becoming increasingly scared of each other, but from my previous experience on the road, I was shown immense kindness.  I think we can trust one another much more than we think, and hope to prove this is still true.”

Hiking across the wilds of the Mojave Desert in California to the lush hills of Ireland, on through Germany’s Black Forest and down the swirling River Danube, Tom has now covered over 4,300 miles of his world walk but still has a long way to go. To complete an official world walk in accordance with the rules laid down by the World Runners (and Walkers) Association, Tom needs to cover over 26,230 kilometres (more than 16,300 miles). This would be equal to covering at least four continents coast to coast, every step of the way.

Tom started his journey at the US-Mexico border near San Diego with a Juarez street dog named Einstein. Though the logistics of walking a dog through the desert proved too tricky. “It was unfair on poor Einstein, who was soon struggling, and naive of me to think it was possible to take him through that terrain”, said Tom. On the bright side, Einstein is now living happily with a dog-loving family in California.

The first part of Tom’s journey covered 2,700 miles across America from California to Savannah in Georgia facing some wild conditions along the way.

“Now I’m about midway through Europe, hoping to finish the European stage in Istanbul. Next is likely to be Africa. The whole walk will take over three years. It’s quite a mission but, other than losing a few toenails, dodging rattlesnakes and the odd fierce storm, so far, so good.”

Tom recalls the great kindness he has received on his journey, often being put up by complete strangers. He has spent nights everywhere from “churches to Mexican restaurants, from barbershops to horse and cattle ranches”. The same for Europe too, especially the pubs in Ireland, who often let him camp in their gardens.

Tom wild camps most of the times but loves meeting families who put him up or other travellers in campsites and youth hostels. Tom met me in the dorm of a hostel in the little Irish town of Killarney. What were the odds? Tom tells me he is no great athlete or survival expert but does have walking stamina. ‘I’m like an old mule,’ he laughs. ‘Never stop plodding. Keep on keeping on is my motto!’.

On his world walk Tom is raising money for three charities that mean a lot to him. They are – The Alzheimer’s Society, The Puzzle Centre and Medical Detection Dogs. Please click for more information on the charities and how to donate. 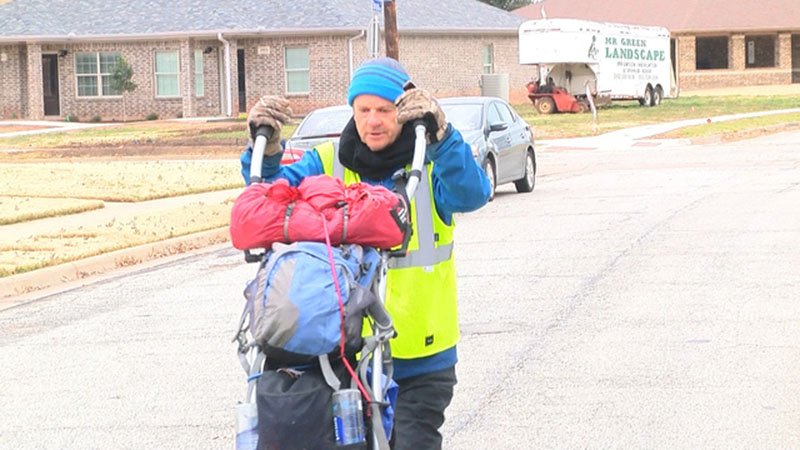 WICHITA FALLS (KFDX/KJTL) - One man is walking with a purpose. That walk is spanning the United States and then across other continents for charity.

Tom Fremantle started his journey in San Diego, California in September and it will end in Savannah, Georgia.

His goal is to raise awareness and money for the Alzheimer’s Society, Puzzle Centre, which works with children who have autism, and for medical detection dogs.

On his walk across the country, the weather has thrown a little bit of everything at Fremantle.

"Whether it's the incredible heat in the desert, freezing cold in the mountains of Arizona," Freemantle said. "You are completely exposed to the elements. On Boxing Day there was an incredible storm in Seymour, I'm sure you had it here too. I went to do my laundry. You might as well have thrown 12 buckets of water on me I got completely soaked. There was an inflatable Santa that shot down the road faster than Rudoloph."

Along with helping charities, he is hoping to spread a little kindness on his journey as well.

And some of those strangers who have shown Fremantle kindness by opening their home to him are Becky Hernandez and Stephen Acheson.

"I had a friend that called me from Lubbock and a friend of her's had hosted Tom, in the Brownfield area. They knew he was headed to Wichita Falls so she called and asked if I was interested in hosting," Hernandez said. "I looked up his information and saw his cause, Alzheimer’s is near and dear to me and to Steve. We have both lost parents to Alzheimer’s."

He hopes to reach Georgia before his visa expires in March but he can only travel so far each day since he is walking.

Fremantle will leave Wichita Falls and head toward Henrietta tomorrow as he continues his journey across the states.

You can find more information about Fremantle's journey or to donate to any of the charities here.