So when his Dad travels to Mexico to film some rare butterflies Hal jumps at the chance to join him. Even better, his sassy school friend, Gina, tags along too.

Hal is soon swept up in a hair-raising adventure along the US-Mexico border pursued by two rival Mexican gangsters, Tomas Ceto and Pretty Boy Sanchez.

Accompanied by Pancho, his loyal Juarez street dog, and a ragtag bunch of fellow misfits – including Rosalita, Tomas Ceto’s hot headed daughter – Hal has to use all his wits to stay alive.

Blazing from the chaos of Mexico City to the remote Chihuahua desert, from the wild Sierra Madre Mountains to the oceans of Baja California, join Hal and Pancho on the ride of a lifetime…

(Published 2016 in aid of a variety of tiny, outstanding Mex-USA border charities) 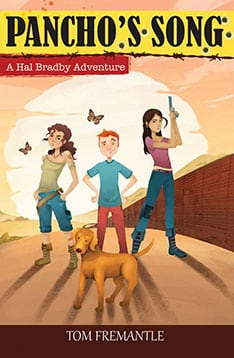