Hope to squeeze in one more update before Christmas but, if not, wishing you all a wonderful one and hoping great things come your way in 2019.

Why do these aliens look so glum? I’d have thought landing on a new planet would be thrilling. Maybe Earth was a bit tame after Mars or Jupiter. Or maybe Chicken Fried Steak didn’t agree with them. 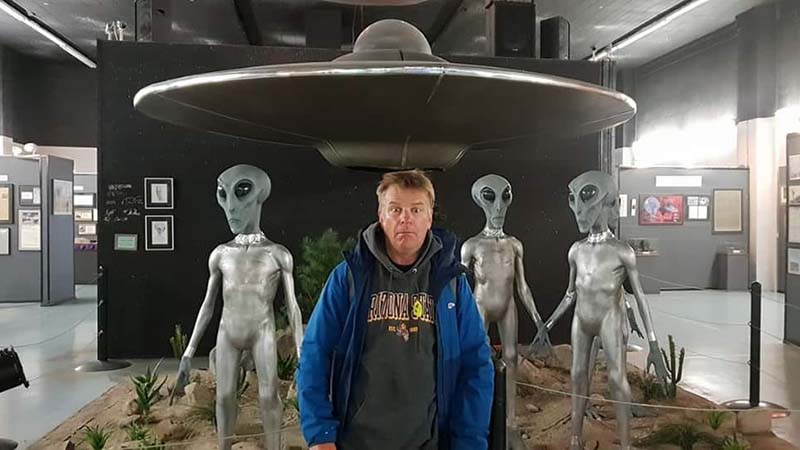 This photo was taken two days ago at the UFO Museum in Roswell – the city where an alien craft supposedly landed in 1947. The museum is great fun but far from convincing.

The shots of the supposed flying saucers are about as realistic as those old shots of the Loch Ness monster, blurry, indistinct and could be anything from a frisbee to a Golden Retreiver.

The remnants of the UFO craft looked more like cling film used to wrap a Christmas turkey.

That said, I like and admire the good folks of Roswell for their entrepeneurial brio.

I also think it’s very possible that there is other life out there in the universe and the Roswell incident at least sparked some interest and debate on this topic.

I walked 25 happy miles to Hagerman yesterday passing fields of cattle and cotton. 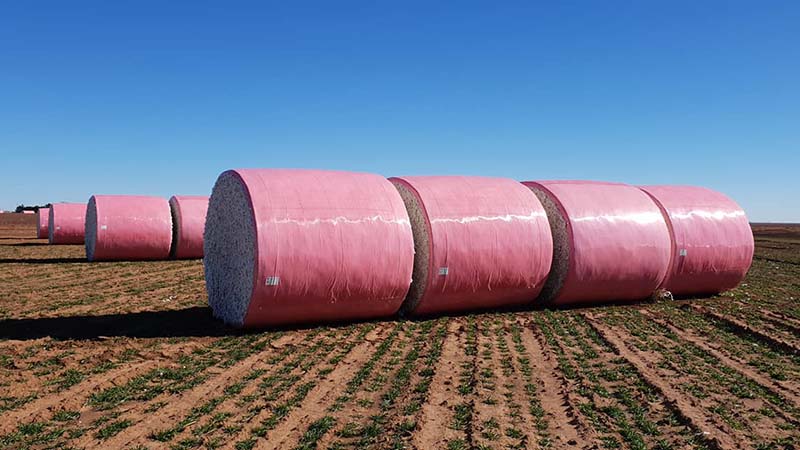 I arrived after dark – the sun goes down soon after 5pm now.

At Piccolino’s Cafe, the owner, Carlos, allowed me to sleep in the neighbouring barber and beauty shop. That’s certainly a first! I pulled a load of chairs together and had a great night’s sleep. 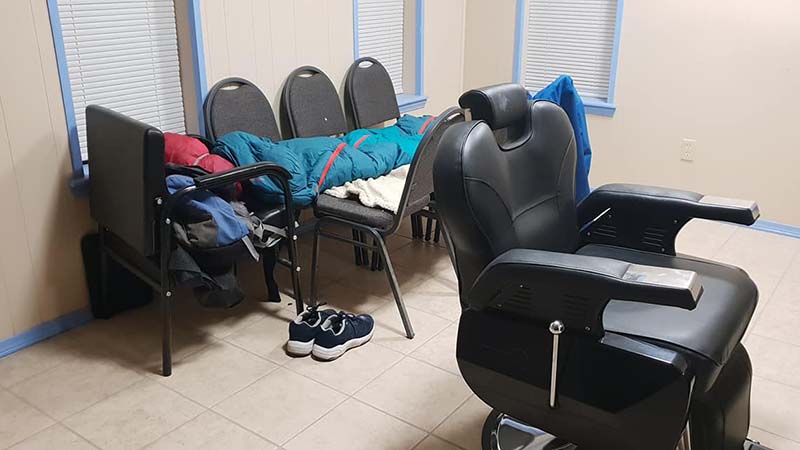 This morning a lovely local woman, Lucinda, gave me two breakfast burritos. I liked Hagerman and was sorry to leave so soon.

Walked 24 miles today and am now writing this from my tent in the middle of nowhere on the road to Lovington. Next stop Texas! 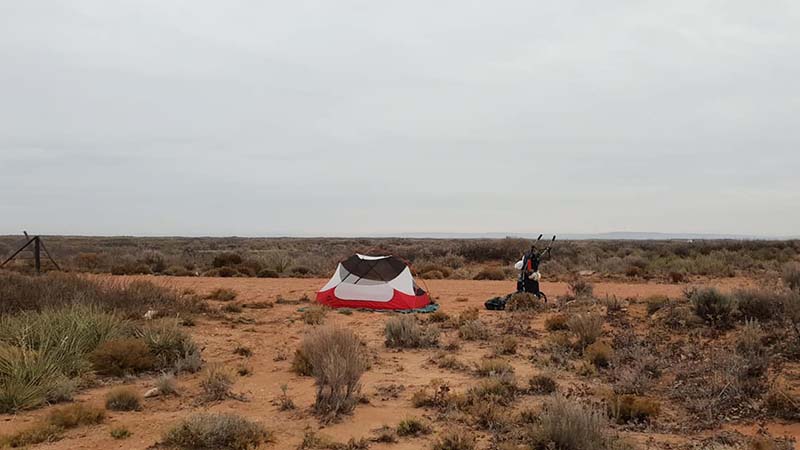 I sound like an old geezer saying this, but it still staggers and delights me that modern tech enables me to send an Instagram post from my tent, the nearest tiny town over 20 miles away. Magic. 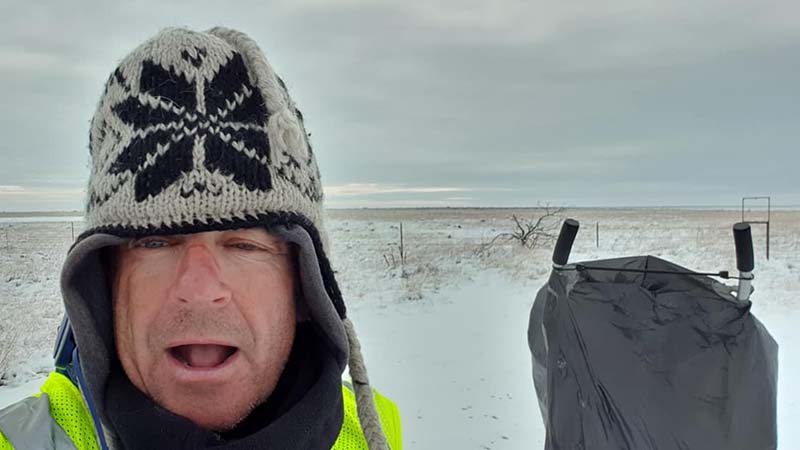 Let it snow! Koko looking very unChristmasy swaddled in a bin liner. As for me, no comment, need to work on my selfie skills.

I’m so impressed by how locals look out for each other here in the New Mexico backwoods when the weather kicks in.

On arrival in one horse Maljamar, I was given water, four tins of Spam and a load of handwarmers by Charlie, a local fireman.

Nothing was open at all so, as it was now dark and beginning to snow, I tried the local church. Open! Yesss! I cheekily bunked down on a pew, overlooked by a menagerie of nativity farm animals. Slept like a dream all night, left a little donation and strode off into a winter wonderland. 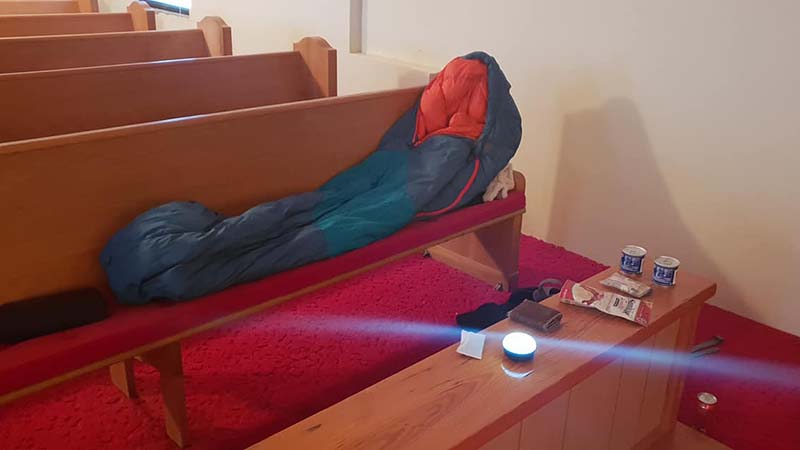 Five miles out of town, Curry, another fireman, and Charlie’s dad, pulls over. He tells me they looked all over for me last night having made me some food. When I said I sneakily slept in the church, he told me that was fine and the reason the church door was left open.

‘We want to make sure Maljamar treats you right.’

Well, you certainly did, Curry. Thank you.

On the 26 mile walk to Lovington, the road was initially snow caked with very little traffic, but picked up as the day went on. 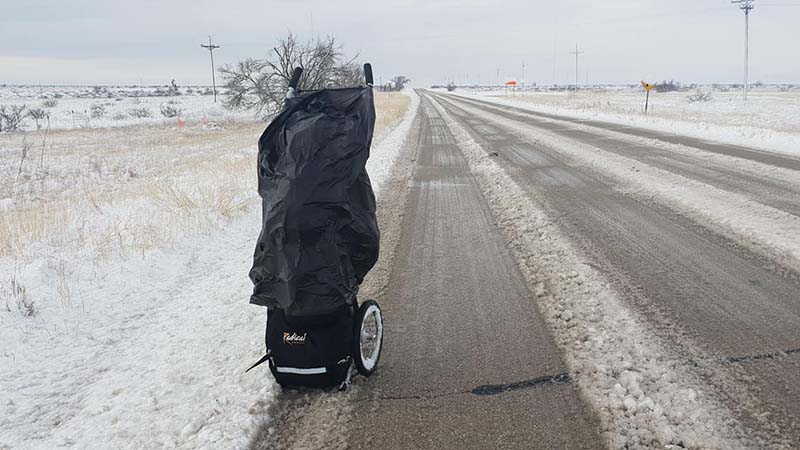 At least a dozen drivers stopped to offer me a lift. When I explained I couldn’t accept they either said: ‘God Bless you’, ‘Be safe’ or ‘You crazy ass $%#@!’

I was so touched by all these locals checking my welfare, especially as the landscape was eerily isolated, just snow, cattle, wind turbines and the odd oil well ‘nodding donkey’. Always, in the wildest places, I find the people so decent, and across all ages – elderly ranchers, parents with young kids, a gaggle of teens off to a rodeo, oil workers, truckers – they all went out of their way to help.

In Lovington, happily knackered, my kit smelly and soggy over the last few days, I checked into the splendid Budget 7 Motel.

The joy! A hot shower, a bed and a heater to dry my gear. I’ve so many things drapped all over the place, my room looks like a wigwam convention.

Sunday off as I prepare for the final New Mexico push into Texas. Yeeha! 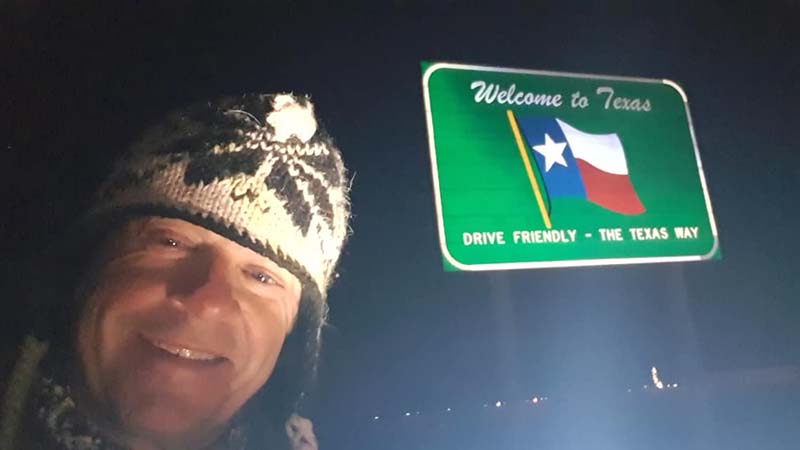 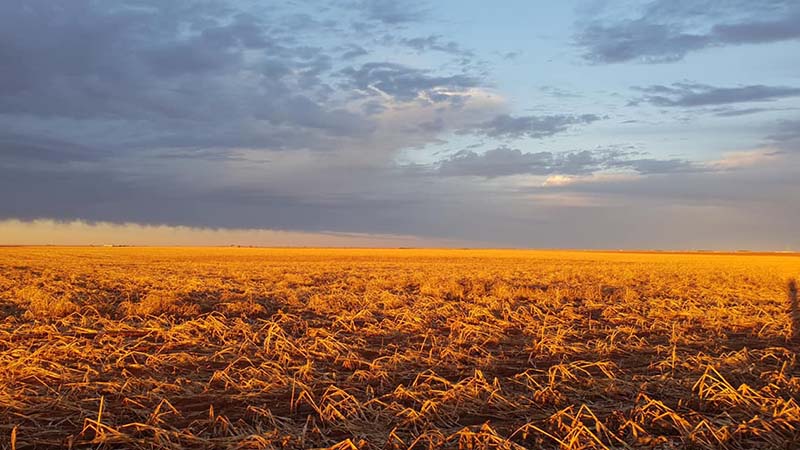 The previous weeny town was called Plains and t’was mighty flat there too. The locals call the terrain: ‘high plains’.

I can now understand when people from level, fenny East Anglia talk about their ‘big skies’. The evening skies here are ‘big’ too with a constant light show, simply dazzling. 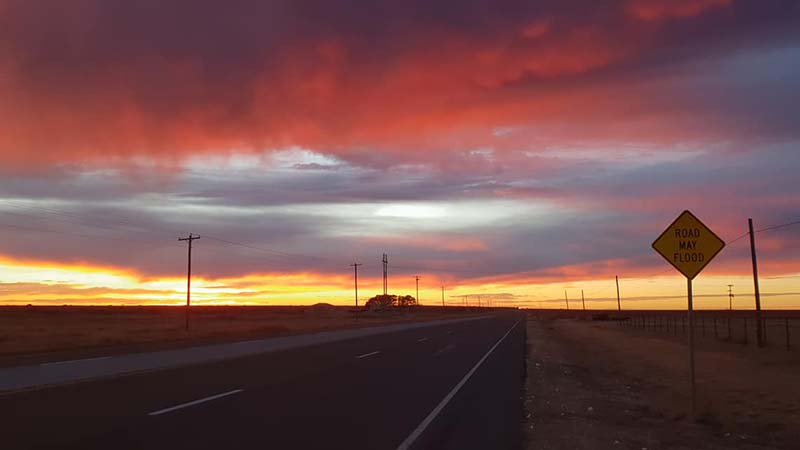 Wild camped in a pasture next to the highway last night. Got badly buffeted by the wind and covered in spiky burrs but other than that slept soundly enough.

Today pushed on 26 miles to Brownfield on a flattish, straight road. No more deer now but lots of rabbits, hawks and gaggles of geese flying overhead in big V formations with their whispery wings. Lots of a pretty, skittish, yellow breasted thrush like bird too. Any ideas what it might be, birder friends?

The final couple of miles to Brownfield I fell upon a single star suspended on a pole near a cotton field. At first I thought it represented the Lone Star of Texas, but then saw a cast of near life size nativity characters under it. 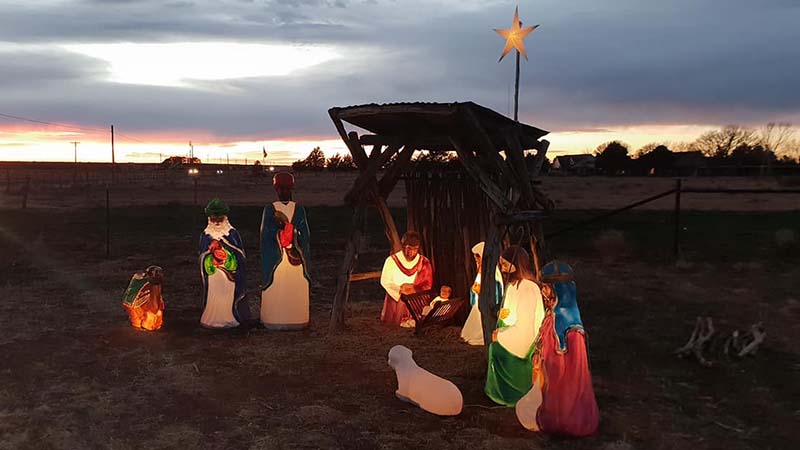 I’m not very religious but given I was on my last legs, the striking setting and the biblical evening sky found it rather moving.

Special thanks to Cecily Parsons, Caroline Gardner and Phil French for their kind charity donations and to David Fox-pitt, Kimberly and Everett McArthur, Dan Jackson, Ron Craft and Ashley and to Maria Teresa Gonzalez, Reynaldo and Ana for all being complete festive stars! 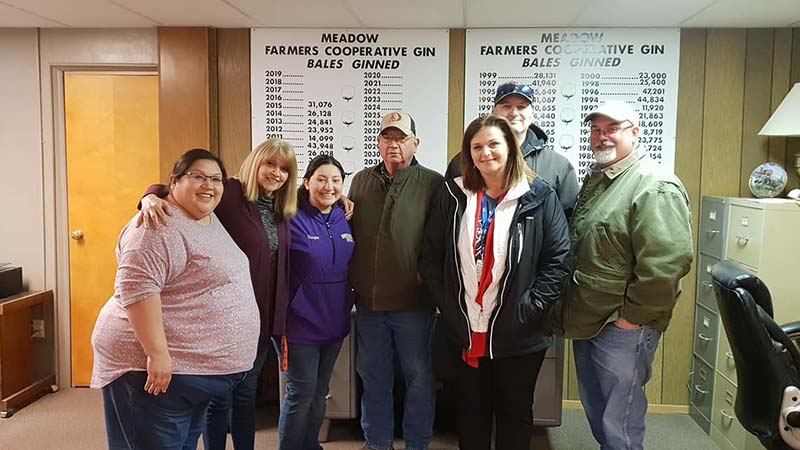 If any of you can spare a Christmas donation to the great charities I’m walking for, The Alzheimer’s Society, The Puzzle Centre or Medical Detection Dogs it would mean the world.

Just go to the Charities page, pick which charity you would like to support and it links direct to their Just Giving page.

To all of you, thanks so much for your support and enthusiasm towards the walk over the last 3 months, it really is what spurs Koko and me on and keeps us going.

Have a lovely Christmas y’all. 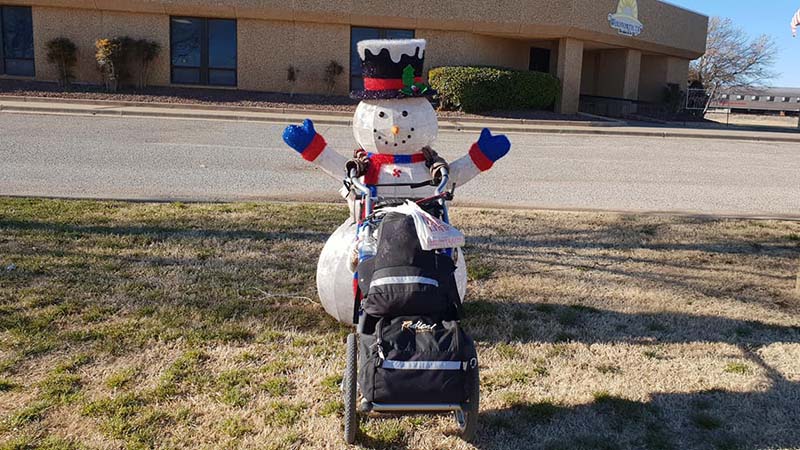