Hello all, I’ve finally made it to Roswell, New Mexico, famed for alien sightings.

I’m a bit cynical about UFOs but will report back. Hope any aliens I encounter are more ET and less the ones Ripley had to fend off!

It’s been quite a walk getting here:

As soon as I walked into little San Antonio yesterday after an easy Sunday stroll from Socorro I knew all would be well. It had that sort of benign vibe.

At the local store I was told I could camp at the nearby Glory Bound Baptist Church. Pastor Walt, friendly and bracingly intense on matters biblical – fair dos, it’s his church – even dropped off a burger at my tent, bless him.

At sunrise, the sky splashed with purple, I popped into the local store again to defrost: it’s been regularly hitting -5 at night in these parts.

Here I met Bernie, a twinkly chap full of local folklore, and lovely Brandie (photo), who served me a coffee and a Chunky Monkey ice cream. It may have less than 200 residents and regular winter frost, but San Antonio had the best ice cream of my walk. How could I resist.

Bernie gave lots of sound advice about the road ahead to Carrizozo.

‘It’s basically 30 miles of nothing until a rock shop,’ said Bernie. ‘Then another 40 miles of nothing. Strong winds, very remote. You’ll pass near White Sands where atomic bombs were first tested in World War Two. Good luck.’

I decided to stay for another ice cream. 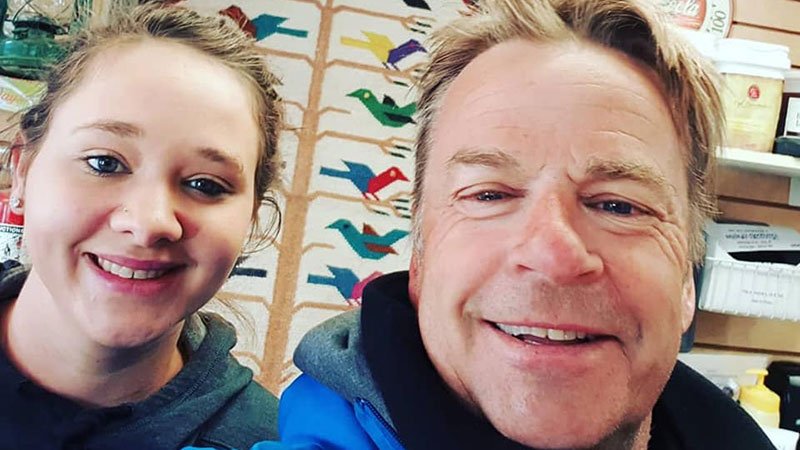 Brandie told me about the area’s famed Sandhill Cranes that migrate to the lakes around San Antonio.

‘I don’t understand the appeal,’ joked Brandie. ‘They have red heads, grey wings and must be the ugliest bird in the sky. Birders love them.’

One of the great pleasures of my walk is chance encounters with the likes of Bernie and Brandie. That sort of brief, open hearted human contact is essential for my trip.

I left with a spring in my step.

Well, I made it, a 65 mile tramp across the wilderness to tiny Carrizozo, but not without casualties.

My beloved Brooks shoes, are now fatally worn down, the soles, especially on my clod hopping right foot, run ragged.

Gutting! I ran the New York Marathon dressed as a dog in these shoes!

You have served me well, dear pumps, but the duct tape surgery is becoming too much. Now I have a pair of 20 buck trainers, the only suitable shoes I could find out here in the boonies.

Out of mishap, good things can arise. On the last day to Carrizozo, my blood was up and I blasted out 32 miles, my longest daily mileage of the walk so far, admittedly mostly downhill. I was zonked by the end but elated off my socks.

Another major boon was a visit from a friend from Juarez, Humberto, who kindly offered to drive up to help me with food and water drops.

He arrived with sardine cans, tinned fruit, beef jerky and Twix bars, which all went down a treat.

The highway was eerily quiet at times but there were always things to distract – racing tumbleweed, tracts of black volcanic rock, countless stars and a vast mobile home, strapped to a trailer, zipping by, giving the phrase ‘moving house’ – a whole new meaning.

It’s easy to see why nearby White Sands, being so remote, was used for testing the first atomic bomb in 1945.

The scientist, Robert Oppenheimer, said, on witnessing his invention: ‘Now I am become Death, the destroyer of worlds.’

The words are from the Hindu holy book, the Bhagavad Gita, which champions, more optimistically, that only through death, comes rebirth. 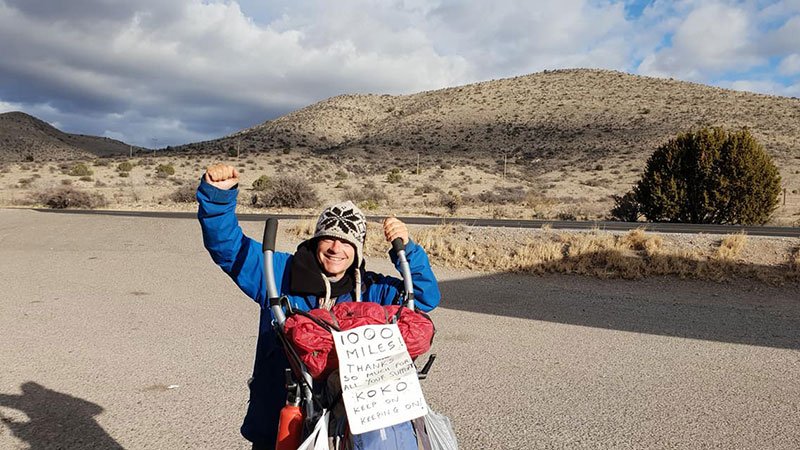 I’ve now officially out walked The Proclaimers with their measly 500 miles and 500 more. Thanks so much for all your support.

At mile 1007 I walked through a light snow fall into the mountain town of Capitan, where I was welcomed in by the exuberant Hernandez family, and the home cooked delights of the Smokey Bear Cafe. 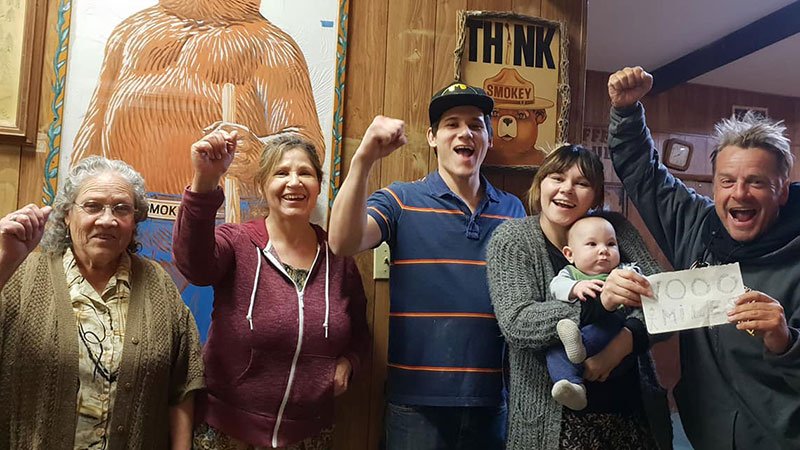 Maria, the owner, her Mum, Juanita, her son, Nestor, his wife, Macky, and their baby, Liam, who is holding up the 1000 mile sign, all helped celebrate. Diamonds, all of them.

It was quite a day. In Carrizozo several locals advised me not to walk at all due to a storm warning. To be fair, the sky did look suitably apocalyptic first thing, like Michelangelo’s Last Judgement on LSD.

Within an hour of walking it began to spit, then splutter, then pour down. I covered my cart, Koko, with a tarpaulin. Passing trucks sploshed me.

Two hours later, the rain eased and the sun peeked out.

Not for long, though, as then came a fierce wind laced with snow flurries. I’ve never known skies so fickle, but, despite Koko and I getting a bit sodden, it was a beautiful day’s walk through mountains, woods and scrub.

The 20 miles I clocked up were made much easier by a brassy tail wind, puffing out my tarpaulin like a sail, and whisking a drenched Koko into the embrace of the Smokey Bear park. 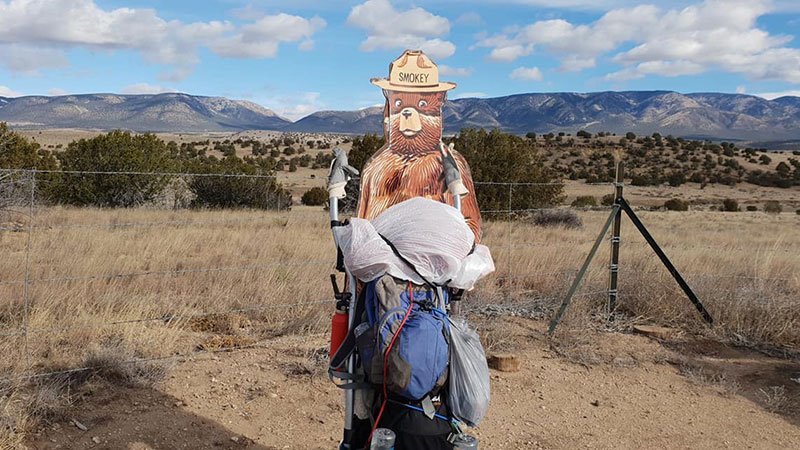 In the 1950s a bear cub was rescued from a forest fire near to Capitan. The little cub was called Smokey, and moved to Washington DC Zoo, where he became a huge celebrity – and, more importantly, the symbol of responsibly starting and putting out fires.

When Smokey died in the 70s, his remains were returned to be buried in Capitan.

Smokey was home to roost – and now he has parks, cafes, motels and even burgers named after him in this quirky, good hearted mountain town.

Tomorrow, on towards Roswell, famed for, among other things, UFOs. With the wild skies I saw today I’m not surprised there have been so many sightings!

Ok, so I realise I’m hammering the 1000 mile landmark home but many of you remarked the last sign – with the lovely Smokey Bear crew – was invisible (sorry, written with Bic biro on my journal).

In this shot, taken outside Allsup’s Grocery store in Hondo, I look a bit wired/crackers/ecstatic! Smokey Bear looks much calmer.

I just wanted to stress how grateful I am for all your support whether a donation to the charities; an encouraging message; an offer of water, food, lodging; a wave from the road or on social media; a thought; a prayer – it all honestly means so much and spurs Koko and I on, and on and on…

Yesterday was a breezy 24 miles from Capitan to Hondo on the Billy the Kid Trail. Breezy because it was all downhill but also because the wind whipped up so much at one stage it knocked Koko clean over. 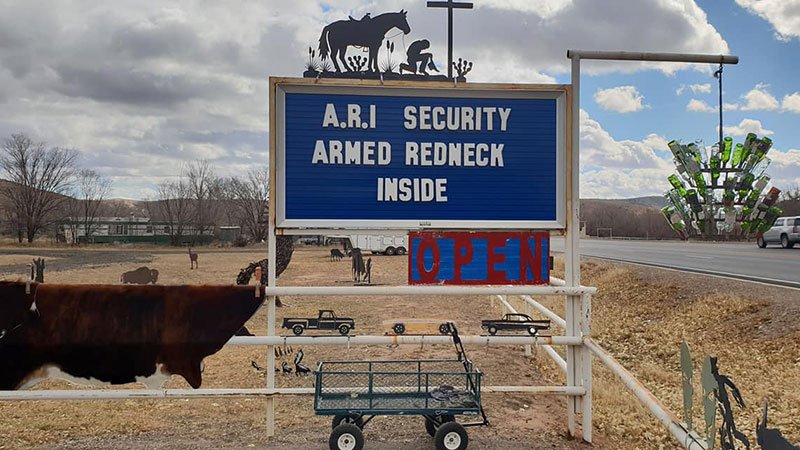 The tumbleweed were going loco, zinging across the road like creatures through a torn fence.

I quickly popped into the museum at tiny, historic Lincoln, much of it dedicated to Billy the Kid. Like most famed outlaws – think Butch.

Cassidy, Jesse James – he was both charming but brutal. His legend certainly lives on: I think the name helps.

At Hondo it was warmer to camp than in the mountains but still cold enough to freeze my water bottle overnight. Now it’s 44 miles, two days walk, of nothing but scrub to Roswell.

The three charities, the Alzheimer’s Society, the Puzzle Centre and Medical Detection Dogs are all small, dedicated causes with lovely, committed staff doing outstanding work. If you can spare a bean (or more) for any of them it would make their day, and mine. Thank you!

If you can’t donate I understand, your moral support is a real boon too.

Thanks so much y’all – I can get away with that now I’m near Texas! – and hope to see you somewhere down the road.

PS. Several of you have kindly asked where I’ll spend Xmas. Answer, no idea. I’ll call the family, then put my trust in whatever the road – and Texas! – deals me, and that’s fine.

Thanks to Julia Thomas-Everard, Sofia Doga, Humberto Venatt Gonzalez, Marcelo Palermo and all the Smokey Bear and San Antonio crew.