Here’s the latest from the little New Mexican town of Socorro.

So exciting to be here, as last night I had a visit from my friend, Karen Yarza, (who was my first boss in Juarez) along with her husband, Ruben and children Santiago and Sofia.

Much as I love meeting new people on the road, there’s nothing like catching up with great friends. They drove over three hours from Mexico to see me, had dinner, saw some sites the next day and drove back. What complete stars.

Ok, some highlights from Thanksgiving week. 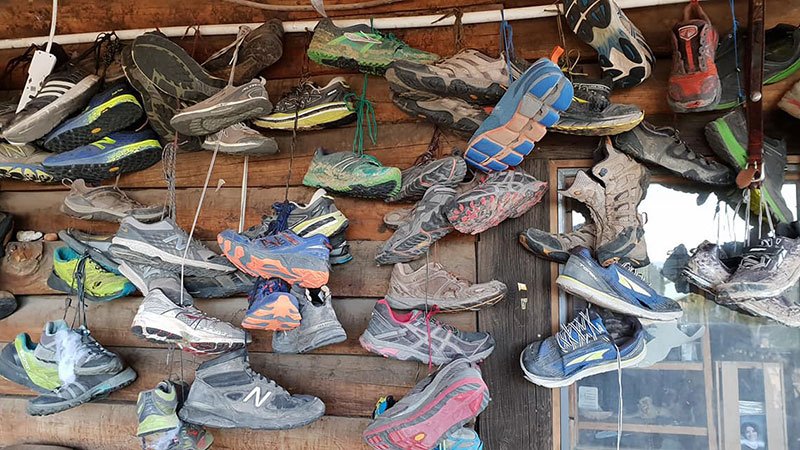 A mishmash of hikers’ shoes outside the famous Toaster House in Pie Town, population 60.

This wonderful home is owned by Nita, the Angel of Pie Town, who has opened her doors, free of charge, to hikers, bikers and random Brits walking cross country, for years. 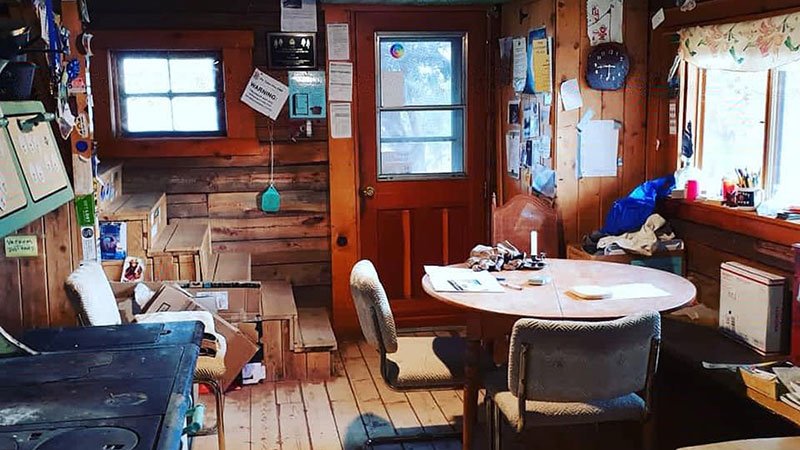 I didn’t meet her but by all accounts she is a kind soul, with a huge heart and a hell of a lot of old toasters, most which hang over her porch.

As I arrived in the dark, after a 21 mile day and having feasted on one of Pie Town’s famed pies – New Mexico Apple Pie with green chilli and pine nuts (superb!) – the house was a godsend.

Though heaving with hikers on the Continental Divide Trail in spring and summer, the place was all mine last night.

As it was icy cold I was very happy for the shelter which is basic, with a long drop outhouse, but also cosy and charmingly chaotic, reminding me of Bilbo Baggins’s home in The Shire.

What a beautiful gesture to open it up to hikers, bikers and wanderers the world over. Thank you, Nita.

On my way to Pie Town I was also enchanted by the sight of a herd of antelope near the ghost town of Omega. They pranced up to the fence line then shot off as I raised my camera, white tushes jinking regally into the scrub.

PS. The funky, friendly Gathering Place cafe had an hilarious gun poster as well as every pie under the sun. Sometimes a town lives up to its name. 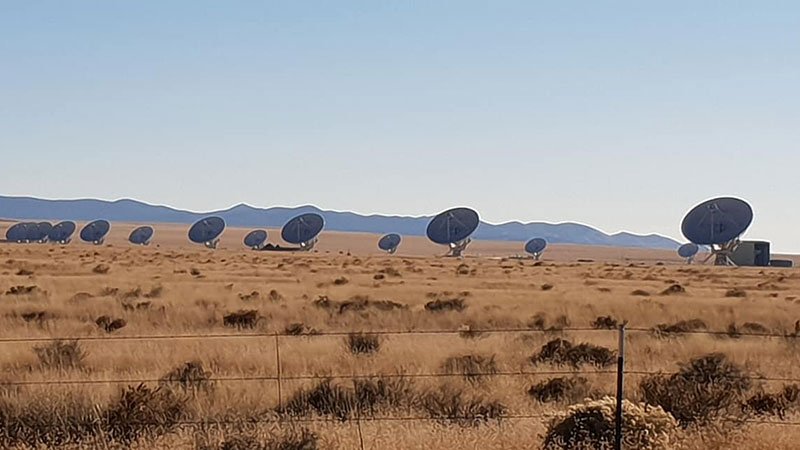 And what a Thanksgiving it’s been, kicking off yesterday when I walked by the eerily beautiful ‘Very Large Array’, 27 huge satellite dishes in the New Mexico wilderness.

Some told me these state owned devices, which look like mutant toadstools from a distance, are telescopes for tracking alien life, others that they are for mapping out the universe: I’ll go with the latter.

They were used as a backdrop for the 1990s film, Contact, with Jodie Foster, which I’ve never seen, but involved aliens. Whatever the Very Large Array is, it both entranced and spooked me, so I decided to camp in the woods out of its spell.

I set up after dark, something I usually avoid, but the full moon led me on. It was chilly, and there was frost on my tent’s fly sheet, but the peerless night sky made it all worthwhile.

When I reached the little town of Magdalena after an 18 miler today, I prayed something would be open. Dos Joyas Cafe was my last chance. I ignored the Closed sign on the window and peeked in.

A man in a cowboy hat, Ramon, beckoned me over and invited me to tuck into turkey and pumpkin pie with his family. My smile could have lit up the Very Large Array.

Ramon is originally from Chihuahua, Mexico, his wife, Angela, a Navajo Indian. It was a wonderful fusion of families and cultures that I felt hugely lucky to join. 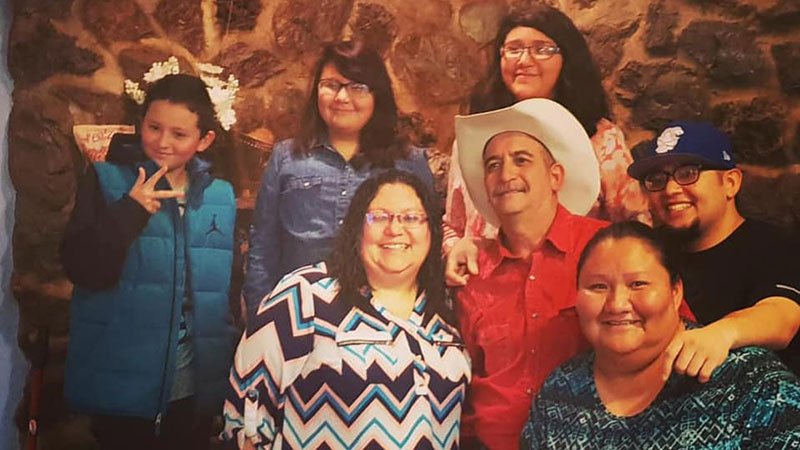 Angela’s father, Lee, explained that most of his family lived on a nearby reservation. He told me the Navajo were the largest of the Indian tribes, with a language so unique it was used effectively as secret code during World War II, the Navajo recruits known as Windtalkers.

Lee said Navajo was now being taught at schools in the reservations, but there had been a time, a century ago, when his relatives had been ordered to wash their mouths out with soap if they spoke their native tongue.

‘A bit hard considering we were here first,’ joked Lee. ‘But now look at us, Navajo, Mexicans and an English guy all together. God Bless America!’ I’ll drink to that. 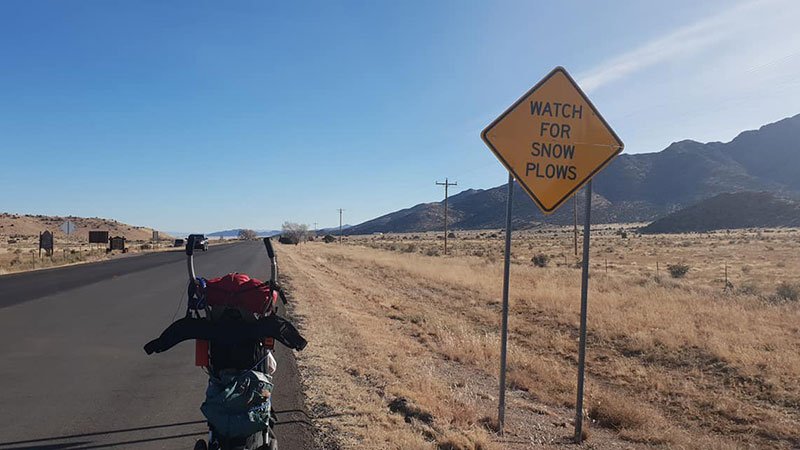 Sign posts sprung up everywhere on the road to Socorro – warning of ice, snow, elk, cowboys and pumpkins.

The one that grabbed my attention most was a School Bus Stop sign blasted by bullets. Surely some signs should be off limits for target practice!

School children here have it tough enough already. Due to the occasional mountain lion, black bear or wolf (recently re-introduced to the region) some school bus shelters even have lockable cabins alongside.

One thing I’ve been really impressed by here is the local police. Yes, they all pack serious heat (to almost Robocopish levels) but they have been very courteous.

Last night I waddled into Socorro after a 27 miler, led on by the moon. Two police cars pulled up, with three cops spilling out to question me. Apparently there had been reports of a mother with a head torch on pushing her baby frantically down the highway in a cart. I matched the description.

To be fair, my woolly, tasselled hat does make me look a bit like a Dutch milk maid from a distance.

‘Grow a Forrest Gump beard,’ joked one cop. ‘That way nobody will think you are a lost Mama.’

‘Happy Thanksgiving, Sir,’ said another. ‘Be safe, there’s some bad people around.’

‘Maybe, but so far, many more good ones.’

Thanks so much to Ramon Gutierrez and Ang Ganadonegro and all at the Dos Joyas Cafe in Magdalena, it was a joy to meet you all at Thanksgiving. Thanks too to Leonie and George Thorogood for their very generous donation to the brilliant Puzzle Centre.

For info on all the three great charities I’m walking for, the Alzheimer’s Society, The Puzzle Centre and Medical Detection Dogs, please see my charities page which links direct to the charity Just Giving pages:

Thanks so much for all your encouragement. The next stretch of New Mexico towards Roswell – famous for UFOs – is remote but I’ll report back when possible.

Have a splendid week y’all.