What a final fortnight in the Middle East – hiking through Jerusalem and Bethlehem finishing up with a splash in the sea by the Gaza Strip. I stayed all over the place – a Kibbutz dormitory, a derelict house in an Orthodox Jewish village and a Palestinian Peace Hostel.

Extraordinary sights galore, but, as always, even more extraordinary people. Now just back in England to secure my Russian visa (need to provide fingerprints) and brace myself for the Ukraine and, of course, see my nearest and dearest. This next part will be hard yakka (Russia is BIG with wild terrain): I am daunted but very excited.

For now, last snapshots from the Holy Land… 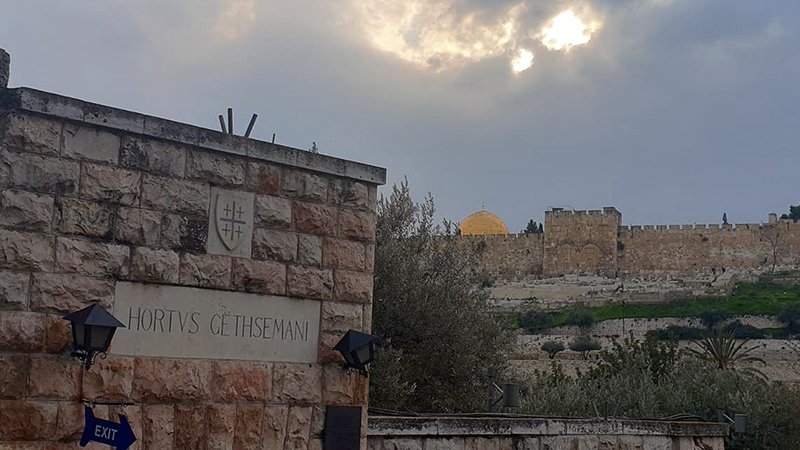 One of my first views walking into Jerusalem, the Garden of Gethsemane, where Jesus prayed before his crucifixion

This was the view as I walked the last mile into Jerusalem.

It was dusk and I was footsore and flagging when I looked up and saw a sign etched in the stone: Hortus Gethsemane. The Garden of Gethsemane! The place where Jesus prayed before his crucifixion.

A friend once told me some of the olive trees here were 2000 years old. And there they were, right in front of me, in all their gnarly splendour.

And what was that on the horizon, winking gold? The Dome of the Rock! Site of the stunning mosque where the Prophet Muhammed rode his horse to heaven.

Moments later I passed the Tomb of the Virgin Mary. 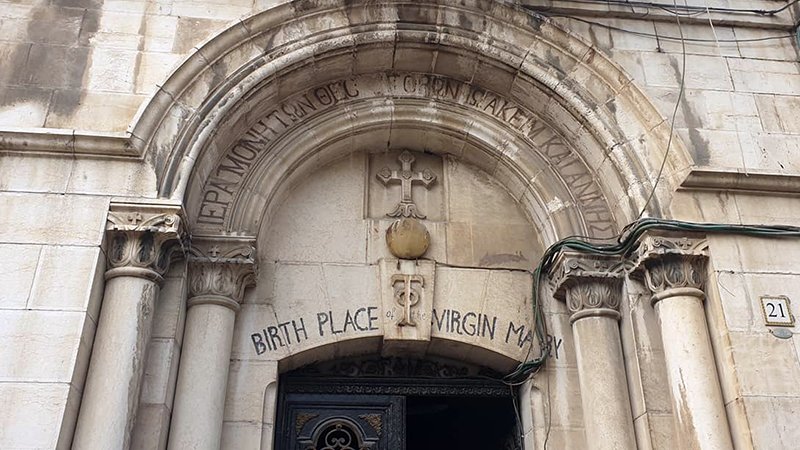 Birthplace of the Virgin Mary

I’m not religious (just a bit spiritual, man!) but couldn’t help be moved by it all, the names I’d known forever, the sheer surrounding beauty, the distant, honey hued city walls.

Bring me my chariot of fire…’ Ok, calm down, Fremantle, new boots will do…

Jerusalem! It didn’t really need a signpost. It was like some fabled mountain or great sea forever sploshing in my imagination. I probably wouldn’t have cried if I’d come in a bus but as I’d walked here over the hills from Jericho – make that San Diego! – the tears fell. I was a pilgrim and Jerusalam is The Big One.

‘Bring me my bow of burning gold…’ Ok, ok, enough! 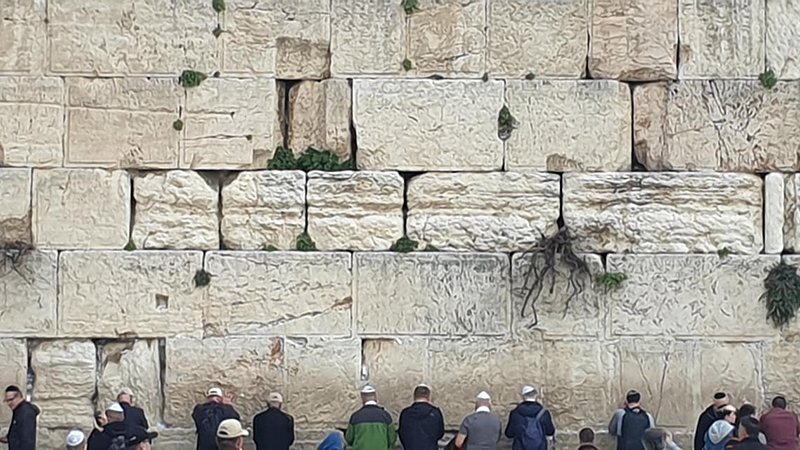 The Western Wall, the holiest site for the Jewish people in Jerusalem, from which their world was built on. Prayers written on paper are stuck into the masonry

Next day I visited the Western Wall, the sacred masonry of the Jewish faithful, from where their world emerged, and the wonderful, ramshackle, smoke filled Church of the Holy Sepulchre, the site of Christ’s crucifixion, burial and resurrection.

My last stop was the Holocaust Museum, fronted by a moving statue of a child with a teddy, reminding us of the 1.5 million children killed.

Inside, a tomb with the remains of the dead from 20 different concentration camps was lit up.

I reeled out, head spinning and scanned the city below, so full of life, of history, of ghosts. I thought of Pandora’s Box, unleashing its horrors, with only hope remaining. This ancient place has seen it all – but a New Jerusalem always rises from the ashes.

Banksy’s dove of peace, sporting a target and a flack jacket, on the Bethlehem Wall. One of the elusive street artist’s most iconic works

This flack-jacketed dove is one of the elusive street artist’s most recognisable works. 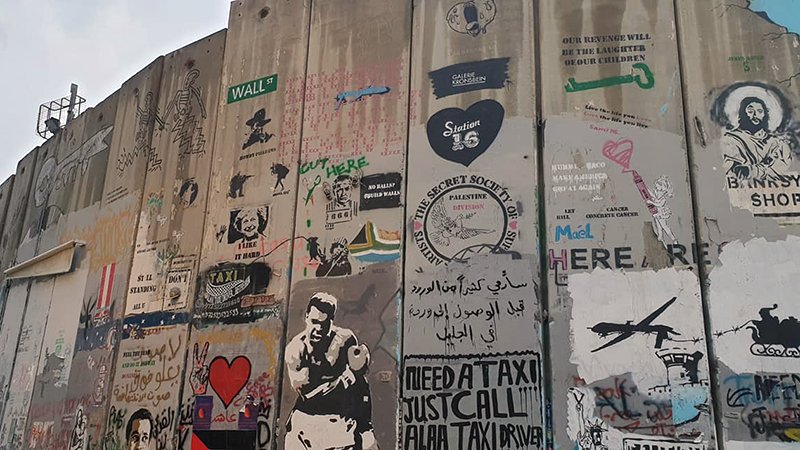 Irked by the wall separating Israel and Palestine – 25 ft high in parts – Banksy also helped set up The Walled Off Hotel, a pun on the Waldorf Hotel in New York. The joke being The Waldorf has the best view in the world, with the Walled Off, only yards from Bethlehem’s graffiti-caked wall, the worst. 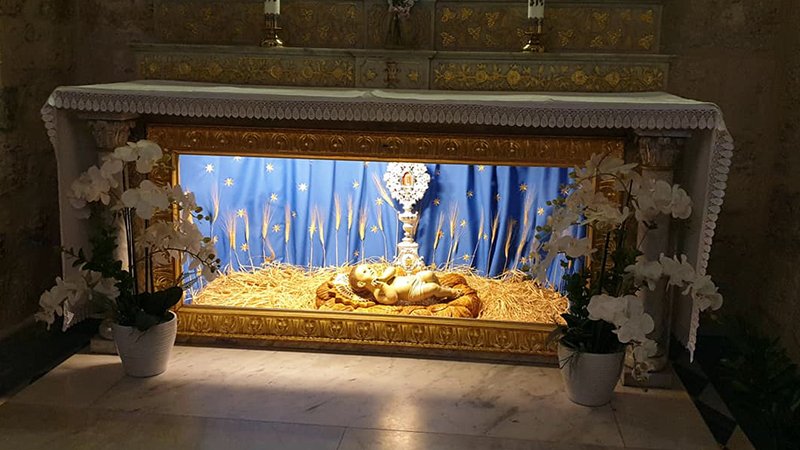 Bethlehem is a mere 10 km walk south of Jerusalem but worlds apart. Both boast biblical beauty galore – Bethlehem home to the Church of the Nativity, site of Jesus’s birth, and Star Street, the twisty, atmospheric alley the 3 wise men followed their heavenly signals. 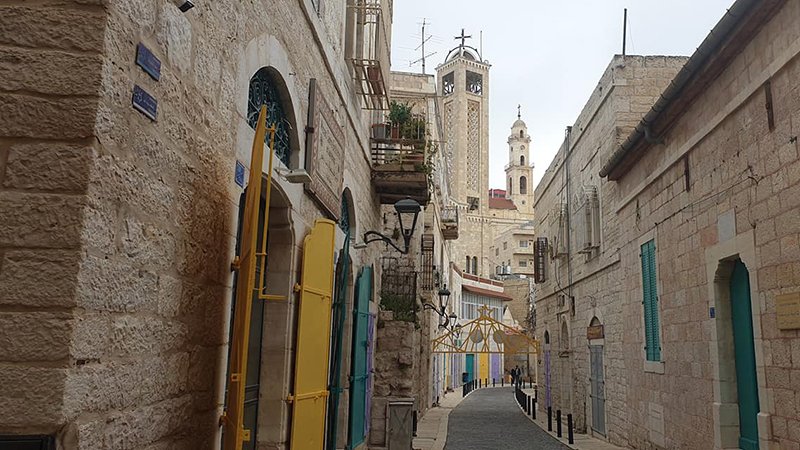 Star Street in Bethlehem, an atmospheric, twisty alley where the three wise men followed the heavenly signs to Jesus’s manger

Walking into Bethlehem the wall is the first thing that strikes you, as in your face as Winterfell (better art, less dragons) but grim nonetheless.

I have Jewish friends and Palestinian ones (both Christian and Muslim) and walking the wall made me sad. The anger between the two groups palpable.

I spoke to Nabi, who works at Walled Off, and like many Palestinians, has spent his whole life in a camp.

He said he’d been shot and wounded by Israeli soldiers while trying to help kids in a tear gas attack a few years ago.

‘I want to forgive,’ he shrugged. ‘But it’s hard. They see the wall as security, us as prison.’ 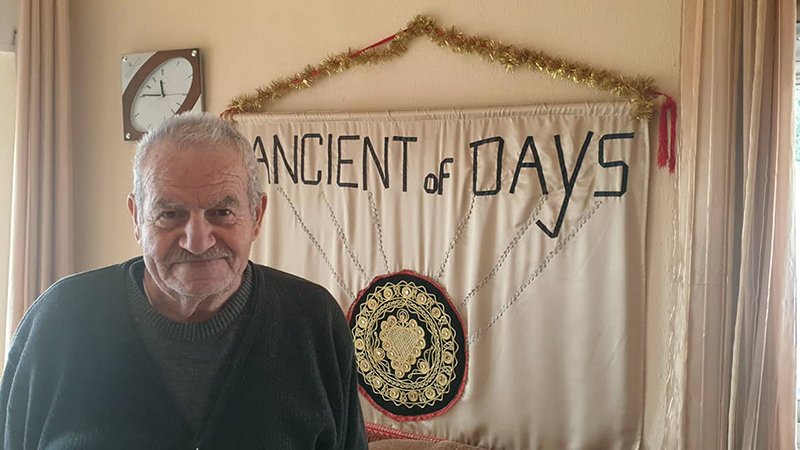 Anton, owner of the House of Peace Hostel in Bethlehem, who accepts Jewish people from across the world

That night I stayed at the House of Peace Hostel and met 80 year old Anton, the owlish Palestinian owner who perked me up.

‘We take Jews from all over the world,’ he grinned. ‘Anyone welcome! Well, unless you’ve got Coronavirus!’ 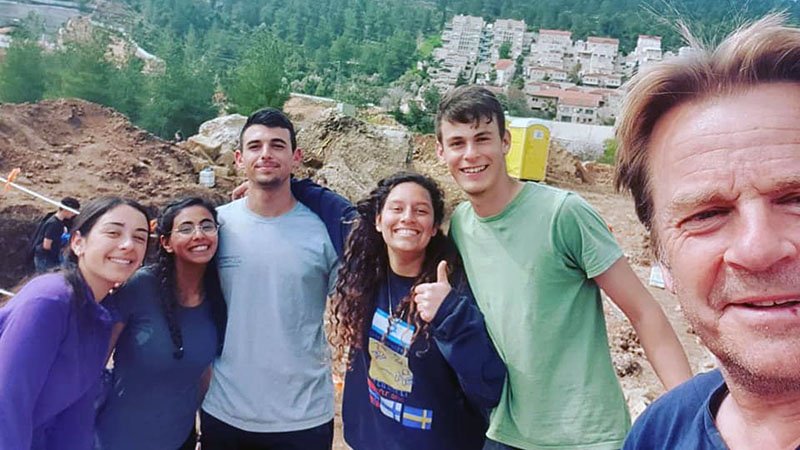 With a mix of Palestinian and Israeli youths who were helping excavate the site at Motsa, a terrific, hard working bunch

The day after I walked west and was beckoned over by a group of friendly young Palestinians excavating a 1800 year old archaological site. It was a joint Israeli-Palestinian initiative and seemed very harmonious.

Israeli kibbutz volunteers, Maya and Ant, showing the stunning view from their bunkhouse in Zuba. I was kindly allowed to sleep in the ‘hikers’ dorm next door

That evening, after a steep, hilly hike, I slept in a Kibbutz bunkhouse in the village of Zuba. The jolly Jewish youths in the dorm next door were helping on farms and in hospitals, before joining the army, where men do 3 years, women 2.

‘I want to serve my country,’ said 18 year old, Maya. ‘But without hurting anyone.’ New generation, new hope. 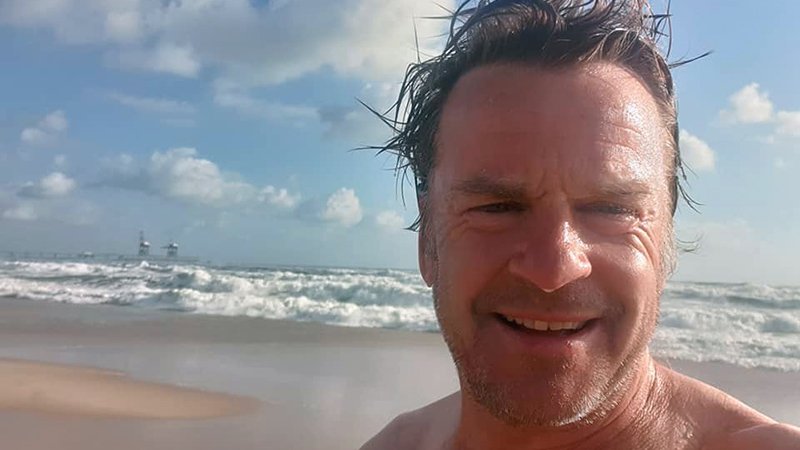 At desolate Zakim Beach just north of the Gaza Strip, one of the most densely populated, volatile areas on earth

But I was so happy, a plunge into the chilly, choppy Med a must. 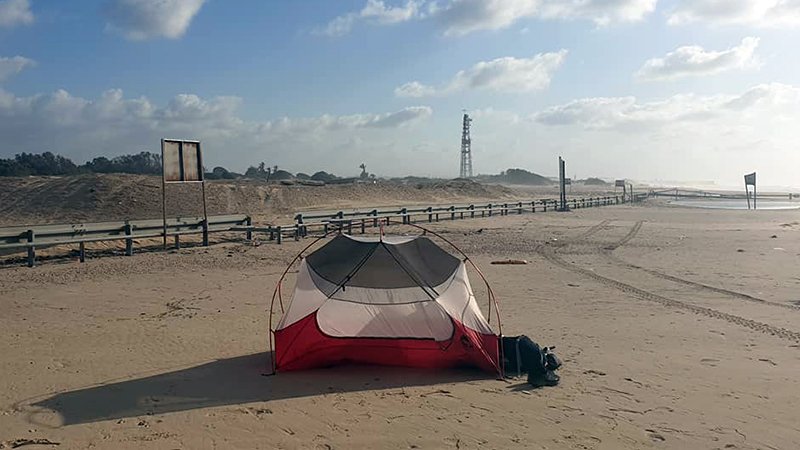 My tent on Zikim Beach, the tower in the distance is on the northern fringe of the Gaza Strip

This deserted beach at Zikim is hemmed by the Gaza Strip to the south and a power station to the north.

Unsurprisingly, I was the only swimmer – maybe due to myriad NO SWIMMING signs. But I didn’t really swim, just frolicked in the shallows like a loved up walrus.

It was a poignant place to finish: the Hamas controlled Gaza Strip is nigh impossible to enter – even locals need papers galore.

Gaza is tiny – only 25 miles long (leading to Egypt) and up to 7 miles wide – but is home to nearly 2 million Palestinians, many who were displaced when Israel was formed in 1948. It’s one of the most densely populated, volatile places on earth.

Zikim beach boasted an eerie charm as did the village of Beit Hilkiya where I’d slept two nights before. I’d turned up at dusk after 32 hilly kms, wanting to pitch my tent and zonk out.

The village was full of Orthodox Jews (who make up 27% of Israel’s Jews). I asked various black clad, behatted elders if I could camp. They looked at me in astonishment.

They were not hostile – but I may as well have landed from Jupiter. Unlike so many friendly Israelis I’d met on the road they seemed very wary. Fair enough, it was dark and I was a shaggy Brit, speaking 3 words of Hebrew. I ended up crashing out of eyeshot in a derelect house. 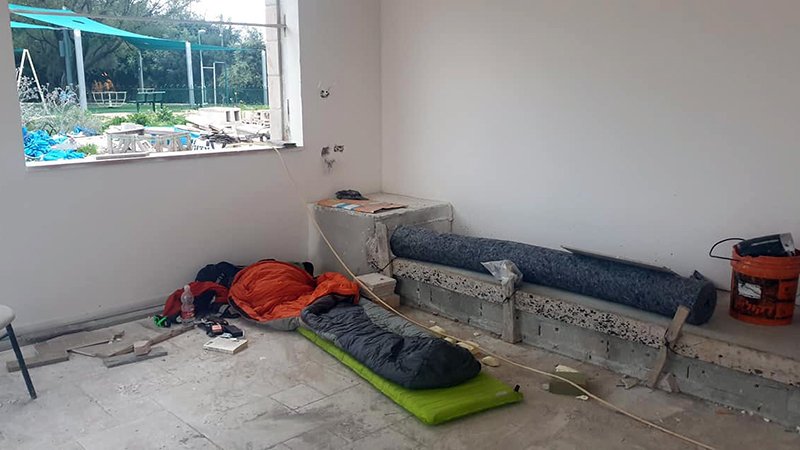 Back on Zikim beach I met Nacer, who had fled Gaza as a teen, after his cousin was killed by Hamas. He’s written lots about his plight – 30 hellish years divided from his family, living in a run down hut. ‘I still have my God, the sun, the waves, the fish,’ he told me. ‘It’s enough.’ 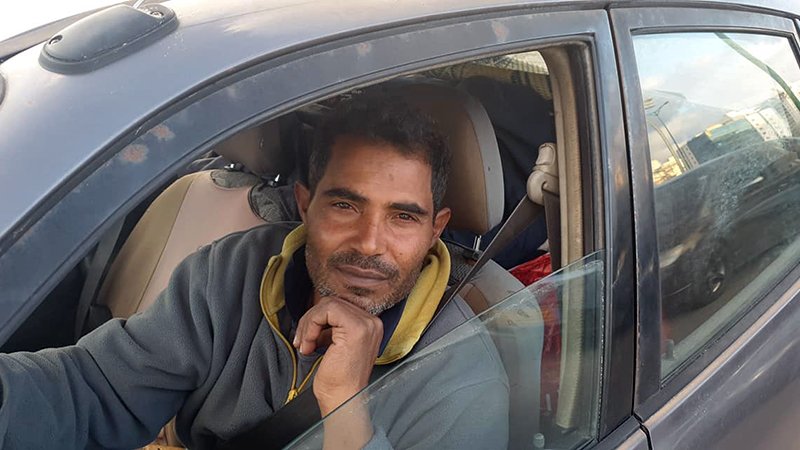 Nacer, who lives in a hut on Zakim Beach, just north of Gaza, in his beat up jalopy. He fled Gaza over 30 years ago after Hamas killed some of his family

Nacer’s grace made me realise I’ve lived such a soft life. But I’m so grateful for this walk, the wonderful strangers, the freedom to hike the highways but also the the byways, the places in between, the Lands Where The Jumblies Live, like this charming, chewed up old beach, where the Holy Land hits the sea, Gaza’s lights winking ahead…

Thanks for reading. Ukraine anyone?

Huge thanks in Jerusalem to all at Abraham Hostel and the YHA, to Anton at The House of Peace in Bethlehem and to Ibrahim for some fascinating historical info, to Gebour and all the joint Israeli-Palestinian team at Motza, to all the Kibbutz volunteers at Zuba, to Alex in Ashkelon and to Nacer at Zakim (also called Zaqim).

Still to be fully confirmed but hoping soon for some great news that will give the charity total a big boost.

Thanks so much for reading. Until next time, stay well and – Nostrovia!