Here we go again! Tales from the end of Arizona and the start of New Mexico, including chilly nights, Dylan Thomas poems, anger, joy, guns and pies. 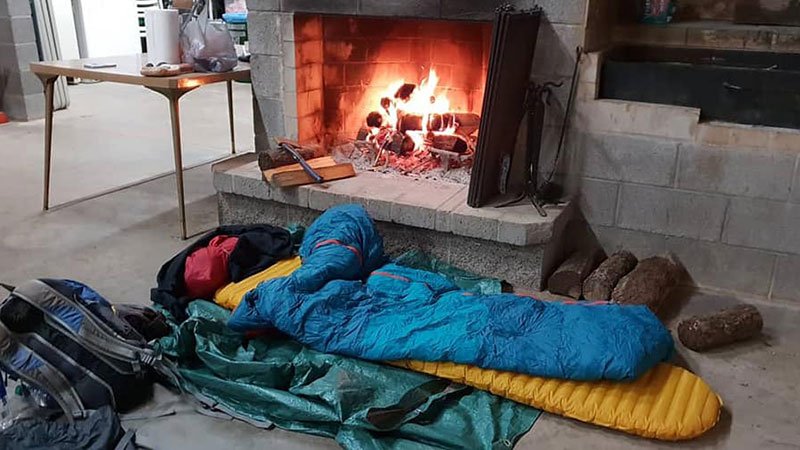 A blazing sunset, raging against the dying of the light.

I did my fair share of raging yesterday too.

After a great night in Vernon Community Hall next to a log fire, which I kept stoked till dawn I had 28 miles to walk to Springerville, a looong day.

The good people of Vernon had worried I would freeze in my tent, it’s been getting down to -10 at night, so they opened up the hall. Bless you Virgil and Tamara.

After striding off to a cracking start my luck turned. A fierce head wind kicked off, the road was all uphill and my right calf began smarting.

Stopping for a water break I sat on a thorny shrub – I thought I’d left them behind in the desert! – which rocketed me up like a startled hobbit and did not improve my mood.

At one point, as I battled against the wind, I completely lost it, howling, swearing, thumping my poor cart: behaving like a semi-house trained Yahoo.

When you are in the middle of nowhere you can get away with this!

The thing is, the anger pumped my adrenaline to bursting point and drove me wildly on. As I raged, I ate up the miles. By the time I’d calmed down the wind had eased, the slope had levelled and I could laugh at my crazed rantings.

I was reminded of a 1930s Tour de France cyclist called Pierre Brambilla, who used to shout, rant, starve himself of water and beat himself with a cycle pump to keep going. Not sure I’d want to thrash myself with a walking stave but I can see his logic!

As I waddled, exhausted, into Springerville last night the sky was so vast, the sunset so eye-poppingly gorgeous, it made me feel tiny, insignificant, and through that, utterly at peace with the world.

Often, what feels like the worst days at the time, prove the best ones. 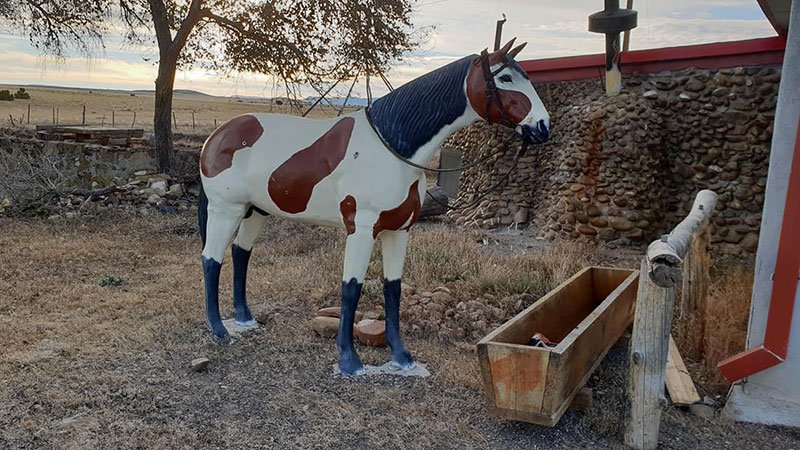 For the first day walking here I didn’t speak to a soul. Occasionally a car or truck would trundle by, the drivers looking at me aghast, pulling faces a bit like this 😮.

It was so quiet, the landscape so grand and empty; just the cawing of crows, a light breeze on my side: the perfect day to walk 24 miles.

I’d been told in Springerville, the last town in Arizona, there was only one building between there and Quemado, the first town in New Mexico.

This one building was in the ghost settlement of Red Hill: a derelict BBQ joint with a wooden horse outside, signifying a one horse town.

When I reached it, I noticed a car outside. Weird, it was supposed to be deserted.

Before putting up my tent out the back I shouted to see if anyone was around.

I explained my cross country walk and that I’d been told I could camp there.

‘I just bought this place.’ A wild haired lady poked her head out. ‘Don’t know about any camping. I gotta a gun here.’

‘Good heavens! No need for that. I’m just a British hiker.’

‘Actually, I got several guns!’

‘Well at least it’ll be a quick death then.’

To be fair, she really had just bought the place – to turn into a rock shop (quartz, crystal, jade) – and it must have been unsettling, a smelly Englishman rocking up out of the blue with a hiking cart.

After a bit of persuasion she did finally relent and let me camp and even wished me luck, as I did her. Kim (I later discovered her name) was not a bad person, just deeply scared.

What made me sad was her immediate fear and suspicion – and the need to tell me, before anything else, that she could riddle me with bullets.

My trip is about championing trust. I’ve been encouraged by much of what I’ve witnessed on the road, but there’s still way too much fear out there.

I’m now in Quemado, where, so far, the locals have been lovely, and, except for elk hunters, no gun in sight.

Sunrise. New Mexico style. Sometimes, just one photo will do.

I also gave my cart an overhaul, oiling and sprucing her up. She’s been making some rum sounding squeaks lately but nothing a splash of WD40 wouldn’t fix.

I notice I’ve called my cart ‘she’, like a ship. All world runners and walkers seem to name their charriots. Legend Tony Mangan calls his Karma, record smashing Rosie Swale Pope dotes on her Ice Chick and dogged Karl Bushby has plumped for The Beast. All their journeys are soul charging and well worth a follow.

I’ve decided on Koko, after asking permission from Siffy and Tor Torkildson, an adventurous pair who tirelessly champion and chronicle the world’s wanderers.

Koko stands for Keep On Keeping On, which is what a world walk is all about. One step, one mile, one state, one country, one continent, until you are done.

I have called Koko many other names, some grim – ‘you heavy x#?€¥x!’ – especially when walking uphill or against the wind. This is so unfair as I’d be lost without her: she’s a sturdy little beauty.

Talking of uphill, tomorrow I have about 22 miles of mountains. But it will all be worth it to reach Pie Town, over 8,000 ft, famed for, you’ve guessed it, pies!

I’ve heard there is also a free hostel run by The Angel of Pie Town. Now if that isn’t worth 22 miles of pushing Koko up gradients, I don’t know what is. And yes, I do intend to eat ALL the pies!

Cheers y’all and thank you for reading.

Thanks to the good folks at Vernon, Springerville and Quemado for all your kindness and Lorraine Muir and Bill for their generous charity donation.

Wishing Americans across the globe a happy and peaceful Thanksgiving this week.