I’ve just reached here on my world walk. A joyous feeling but one I will save until next time as so much has happened on the road here, including a brief foray into Syria.

In fact, since reaching this part of the world, the atmosphere has been so high octane and fascinating I don’t really want to sleep – just walk, talk, write, walk, talk, write…Which may explain my ramblings on the war in Syria at the end of this post for anyone with the stamina.

As always, I owe so much to the lovely local people who have looked out for me and treated me with such kindness as I crossed this complex, spellbinding landscape. Lebanon, Syria, Jordan and Israel – for four such geographically small countries they hold a pivotal place in the future of the Middle East and indeed, the world. 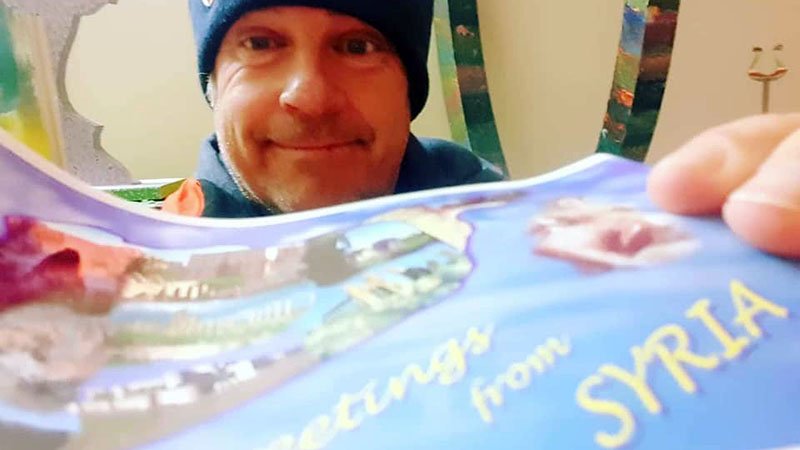 As it’s Valentine’s Day I’ve treated myself to several dates. Dozens of them!

Damascus boasts the best in the world I was told by the grocer at the buzzing Old Town market – and I agree: gorgeous sticky nuggets tasting of honeycomb and caramel. 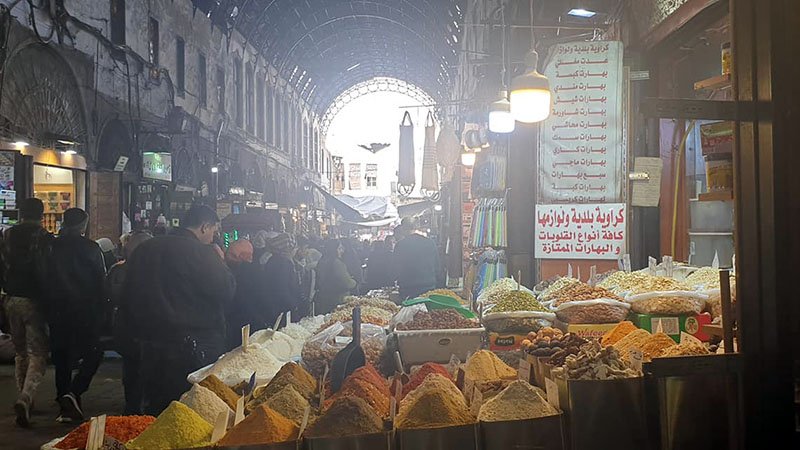 Sugar and spices on display in the Damascus souk

Sadly, my stay in Syria was fleeting, and, other than my wanderings around the ancient, romantic, war scarred capital, I had to make the journey on wheels, rather than foot.

The only way to enter Syria – demand is slim – is via a tour, and this is quite a procedure, even for the cheapest 2 day option, which enabled me to travel overland from Lebanon to Jordan via Damascus.

So far my walk, other than the sea crossings, has been in a continuous line, but in Syria, despite much of the country now being safe (ish), bar tragic Idlib, there is still a mass of military check points, and walking is a no no.

Damascus was mindblowing – a city dating back 4000 years, where Aramaic, the language of the Bible, was widely spoken; where the stunning Umayyad Mosque, once housed Christians and Muslims together; where legendary warrior Saladin lies in an ornate marble tomb; where Silk Road traders converged with their jewels and spices, camels and goats and where St Paul famously had his Damascene salvation. 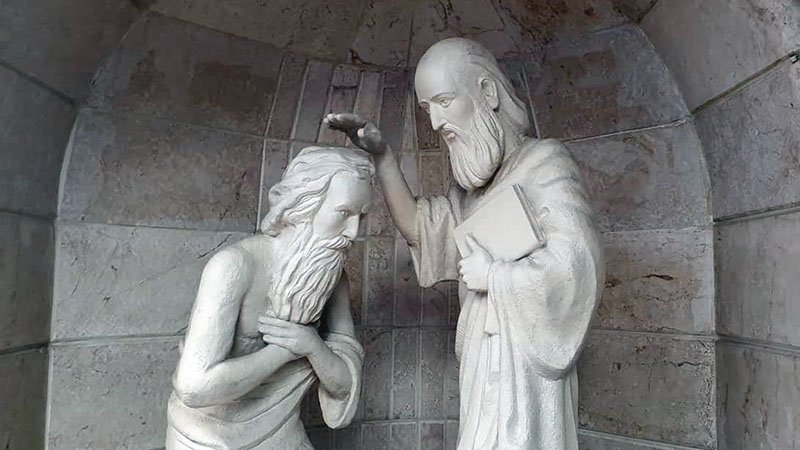 St Paul received enlightenment on the road to Damascus, blinded by God’s light. He was later killed for his Christian faith in Rome, achieving martyrdom

The fixers who organised my Syrian foray were great, and allowed me a surprisingly loose rein. Changing money needed more shifty rendezvous than Del Boy in his prime. 1000 Syrian pounds equal about £1.

Huge thanks to my guide, Khaldoun, Ayoub, Mamoud and lovely Grace and Lauren. 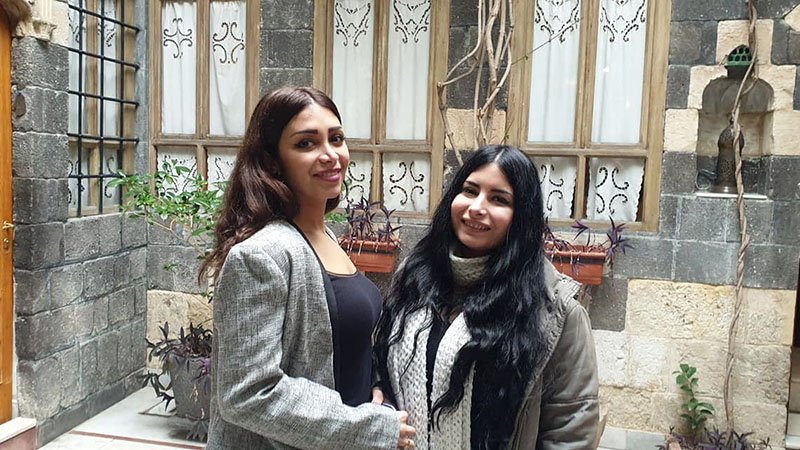 Grace and Lauren, two tourism graduates from Damascus Uni, who hope Syria will soon draw in the same numbers it did before the war started in 2011 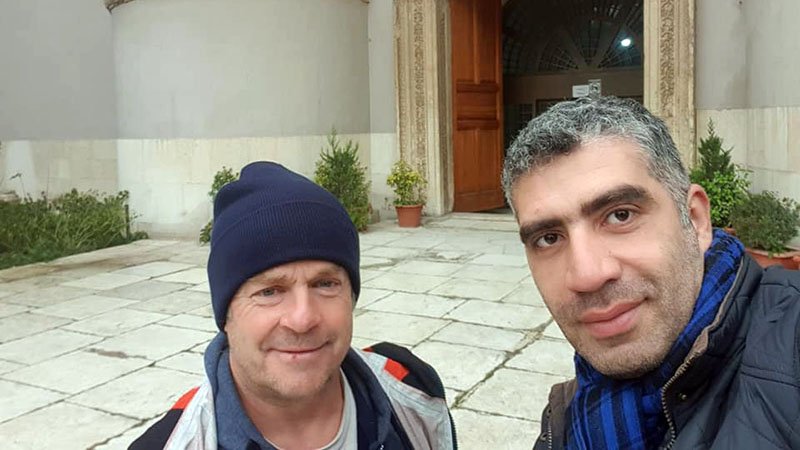 With my Syrian guide, Khaldoun, outside the Damascus Museum

I felt utterly safe other than last night when a huge bang blasted the city awake. Now – according to some news agencies – it’s thought to have been an Israeli missile fired at Syrian military targets, intercepted en route.

‘We’re used to the odd explosion,’ Khaldoun said. ‘Life goes on.’ For all the horrors Syria has suffered since 2011, especially with ISIS, one thing rings true. However grim a country’s regime, the people on the street can still be the kindest. May 2020 bring this beautiful, benighted land some peace.

“I looked over Jordan and what did I see, coming for to carry me home.

…a band of angels coming after me, coming for to carry me home…” 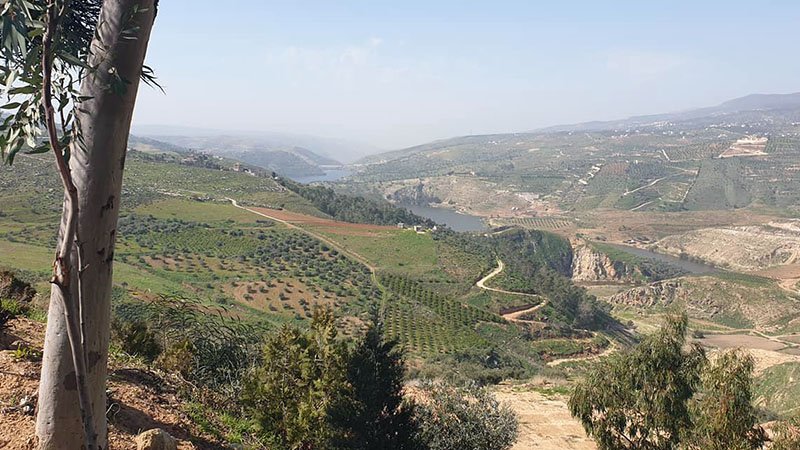 The hills between the ancient town of Jerash and the sprawling modern capital, Amman

What a view! A biblical sweep of the Jordan hills between ancient Jerash and the sprawling, modern capital, Amman.

The last couple of weeks hiking through the Middle East have been some world walk highlights.

This is largely down ‘the band of angels’ looking out for me. 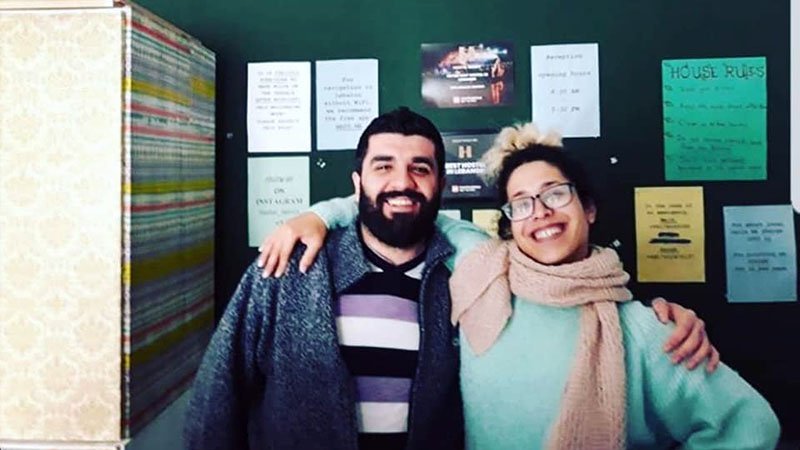 Maryam and Majd, the lovely team at Hostel Beirut. He is Syrian and she is Palestinian and a devoted Ian Dury fan 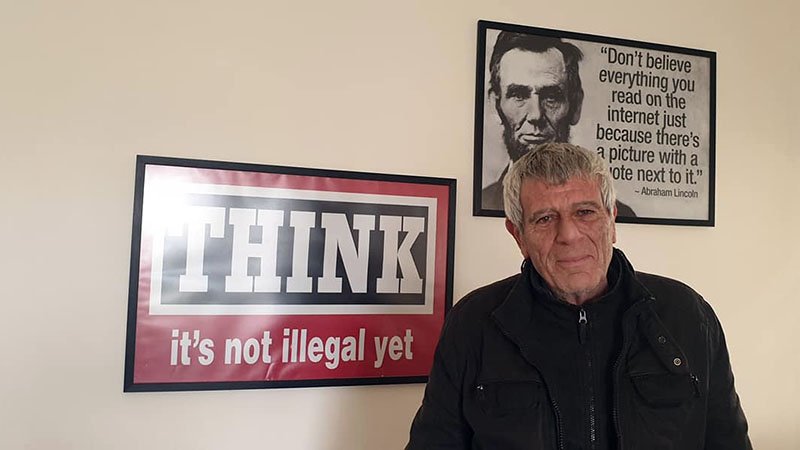 Emile, who, along with his son, manages 1930 Hostel in Amman. A 75 year old, hard as nails, ex-national karate champ who once worked for King Hussein

Also, hard as nails 75-year-old Emile, from Hostel 1930 in Amman, a ex- karate champ who once worked for Jordan’s King Hussein. (Hussein and our Queen Elizabeth II took power within a year of each other in 1952/53 and were close friends).

The monarchy is loved in Jordan and King Abdullah, who succeeded from his father on his death in 1999, is on posters all over the country. He is a very relaxed looking monarch, often appearing in smiley family shots – the kind that might be on a mantelpiece. 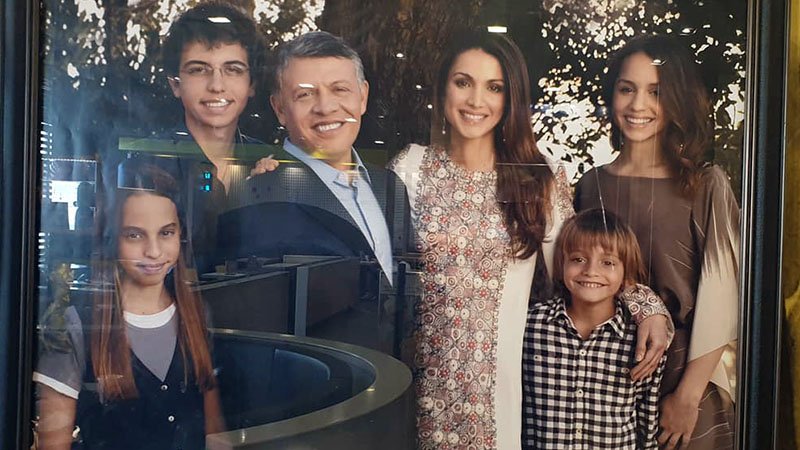 A typical poster of popular King Abdullah and his family, found all over Jordan

Yesterday afternoon as I marched up the hills out of Amman towards the Israel border, I got caught in a rainstorm in the tiny village of El Groush. 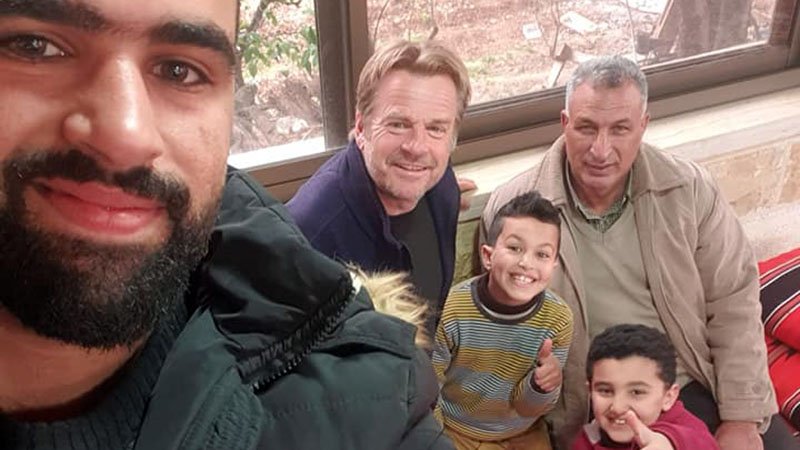 With Juma, Hamza and family in El Groush village in the hills between Amman and the Palestine border. A wonderfully kind bunch

In the shop I met local Mr Fix it, Juma, who insisted I crash at his home, which housed a dozen of his family, from grandparents to toddlers. A wonderful evening eating, laughing and helping the kids with their English homework. A truly lovely family.

People sometimes ask me what I am walking away from on my walk. The answer, nothing. It’s what I’m walking towards that counts. Of course, England will be my final stop. I love my home. But I love the world too. 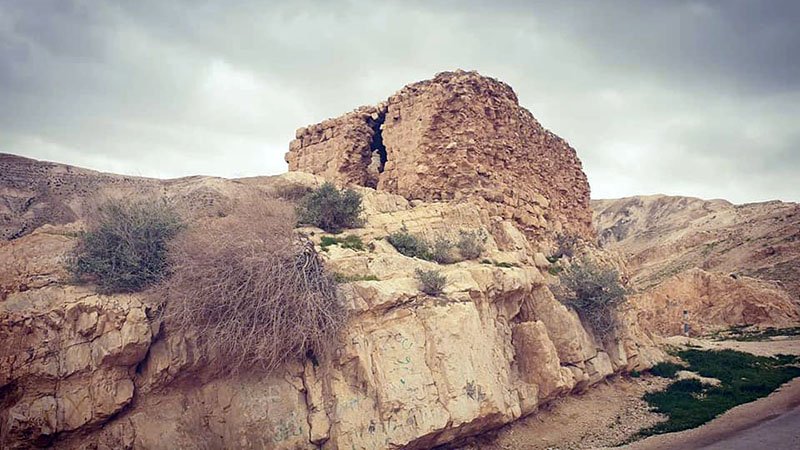 On the stunning trail between Jericho and Jerusalem which passes by Bedouin settlements, monastries hewn out of the rock and in the footsteps of the Good Samaritan

The trail between Jericho and Jerusalem – like stepping back a couple of millennia.

Ancient monastries hewn out of the rock; flocks of goats and the odd camel; bedouin brewing tea, woodsmoke spicing the desert breeze – all on the road the Good Samaritan once walked.

Having this landscape almost to myself was soul soaring. Sadly, to walk in a continuous line to Jerusalem, I had no choice but to mix rustic splendour with crazy busy, checkpointed highways.

This jarring contrast was like listening to an exquisitely lovely choir of angels then being thrown into the mosh pit of a thrash metal tribute band.

But, after 30 long kms, once I’d finally reached the hills of Jerusalem, I was on a rapturous, blood fizzing high (more next time!).

To reach Jericho, I’d hiked to the King Hussein Bridge separating Jordan and Israel. In the short no man’s land between the two I’d pleaded to walk, but was told to take the connecting bus – or get shot. A joke (I hope!) but like Syria, wheels were the only way.

En route I met Mo, a jolly Frenchman, who is half Morrocan. He’d had a hellish time at the border – his phone taken and Facebook posts analysed.

‘I sound French as Gerard Depardieu but with a face like everyone’s idea of a terrorist,’ joked Mo. ‘The sort of guy Liam Neeson blows away on TV.’ Mo said his job was selling milkshake flavours and he had to travel with chilled samples in little bottles. ‘Can you imagine the scares I create!’ He laughed. ‘But all I carry is milk! I’m a very peaceful guy!’

His stories cracked me up but I admired how sanguine he was over the hassles he faced. 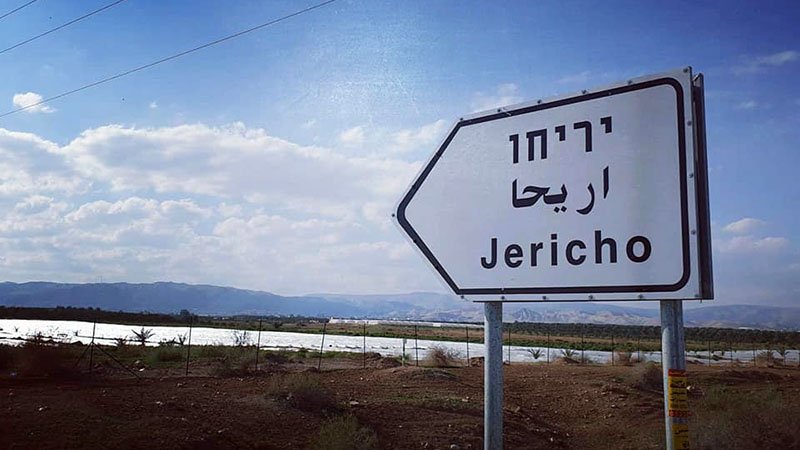 The first sign on crossing the King Hussein:Allenby bridge between Jordan and the West Bank

Once over, I strode off through the West Bank towards Jericho. The area is Palestinian controlled, with many flags and posters of ex-leaders like Yasser Arafat. The local people were warm and welcoming, as were the Israeli soldiers at the border.

So sad that I can walk freely and safely here, on this sacred land, whereas many locals on either side, are cloistered in their own zones.

Big thanks to Khaldoun, Ayoud Mahmoud, Grace and Lauren in Syria, to Omar, Anas, Yusuf and Jan at the Blue Hostel in Jerash to Emile at Hostel 1930 in Amman, to Juma, Hamza, Rimi and all the family in El Grouch village near the Palestine border, to Marcel at the Wadi Hostel in Jericho on the West Bank and to the team at the lovely Abraham Hostel in Jerusalem.

Plus a big shout out to Michael and Xuelin Bates for their very generous £50 donation to the Puzzle Centre and to Boudicea for another much appreciated donation to Puzzle too.

What follows is a long blurb about the war in Syria, so not for everyone, but please read if interested and let me know your views.

As always, many thanks for reading, good luck and, whatever you’re up to, let’s all Keep on Keeping On…