Hello, hope this finds you all in good heart.

Phew, very behind on posts, so apologies this one is a bit of a monster. Lots to report including hitting 500 days and 6000 miles.

Last update I was about to leave on a ferry between Turkey and Cyprus. Since then I’ve walked through Cyprus and Lebanon (as far as the Syrian border), decided on a radical new route East, weathered a storm, visited a remarkable charity and slept everywhere from ancient harbours and hostels, to churches, cathedrals and parks and police stations. Lebanon and it’s wild, wonderful people have been an especial revelation. 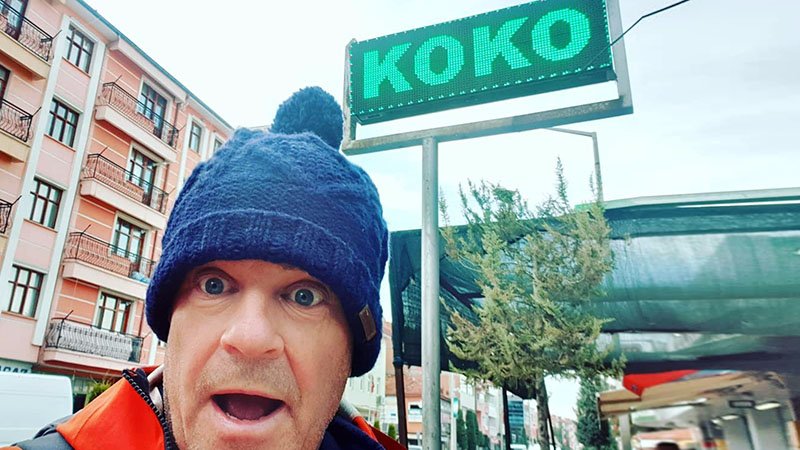 No words, well, except KOKO

KOKO! Sorry, couldn’t resist. Keep On Keeping On all!

Incredibly, after over 1000 kms walking across Turkey, Cyprus was over in a trice: less than a 100 kms from Girne, the northern coast of the island, to Larnaca, on its southern shores. Cyprus was something of a surprise.

I knew there are still two British army bases here, but not that all the traffic still drives on the left; that the UK three pronged plug sockets are used and that English is so widely spoken.

It’s much more expensive here – but much of the relaxed openness of mainland Turkey remains.

Well, except at the border (known as the Green Line) between Turkish Cyprus and Greek Cyprus, a tiny check point, hard to track down in the labyrinthine streets of old town Nicosia, the split-in-two capital.

Cyprus was a British Crown Colony from 1922 to 1960. In 1974 due to escalating tensions between Greece and Turkey the island divided in two, with Archbishop Makarios the first leader on the Greek side – before his fatal heart attack in 1977. He’s revered in Greek Cyprus to this day.

The situation remained volatile for years – there’s still a mass of political graffiti along the Green Line – but, more recently, peace talks have resumed and tentative hopes have resparked for a united Cyprus.

On my walk through the lush, hill strewn island I stayed at Nex Hostel in Nicosia ( thanks Ilyias for locking Koko to your motorbike!)and now Katka Hostel in Larnaca, where the kind Ukranian manager, Yan, helped me lug Koko up endless stairs. 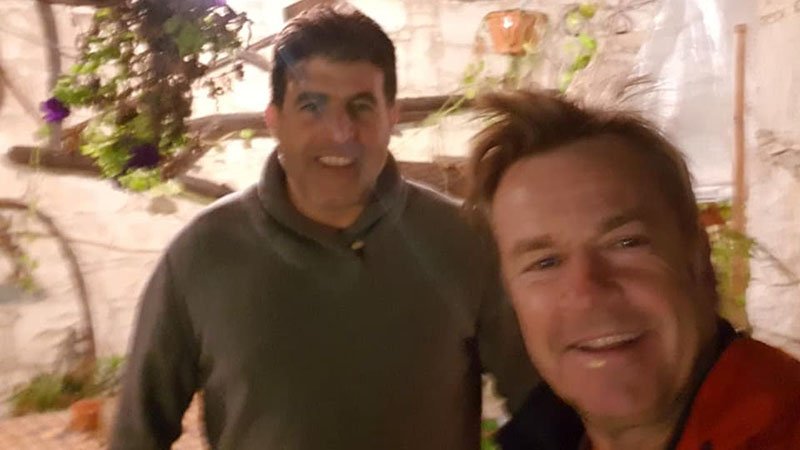 With exuberant Kyriakos who kindly let me sleep on his couch. His home, near the village of Lympia, is made of pale Olympic stone

Last night, half way across the Greek part of the island, I walked into the village of Lympia at dusk. I was all set to camp in an olive grove but big hearted local, Kyriakos, let me sleep on his couch.

Kyriakos’s house is made of pale Olympic Stone – so called because the area was famed for its athletic prowess in ancient times.

From here it’s crunch time. I need to decide on the way forward. More next time. But rest assured, I intend to KOKO! Cheers Cyprus!

Cyprus is the place I need to suss out a way forward.

Plans to walk Saudi Arabia and then Pakistan have hit the buffers. Pakistan is now too tricky to walk across, especially the border with China.

The Nepal to China route is stymied by Tibet (only tour groups allowed) – and India to Myanmar is out due to the Rohingya Crisis.

For this reason, I’m only going to walk another small swathe of the Middle East – kicking off with Lebanon in a few days and yomping on down towards the Red Sea.

Then, it’s back to the Russia option. Several hurdles to jump (visa run to UK needed) but the only way I might still walk in a continuous – very long! – line. 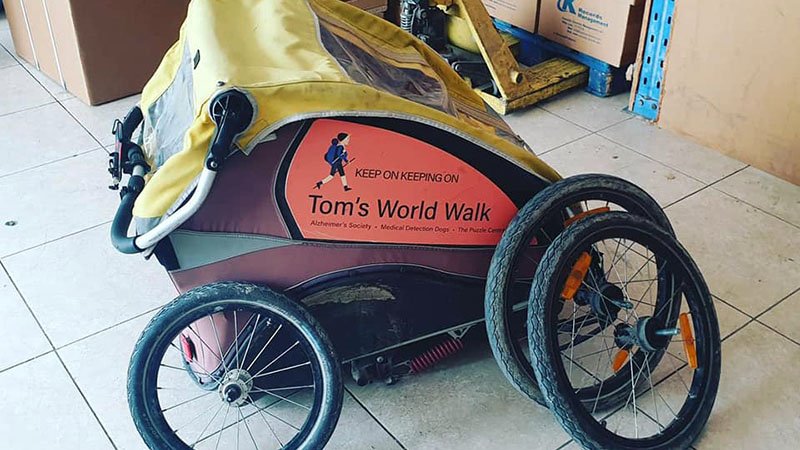 Getting Koko ready for shipping back to Blighty. What a trooper she’s been, thank you old friend

I’ll walk this next bit of Lebanon without Koko, who I’ve shipped back to Blighty today (pic – thank you Andrie at Kazoulis!).

Frankly, Koko’s weary and needs R and R before the mammoth march through Russia. She’s been a star and I’ll miss her badly, but for the next weeks I’ll carry my camping gear in a backpack. My GPS will still track me live.

‘Out of suffering have emerged the strongest souls; the most massive characters are seared with scars.’

So wrote the famed poet, Kahlil Gibran, who was born in north Lebanon. Even further north, not far from the Syrian border, I snapped this young girl in one of the many local refugee camps. 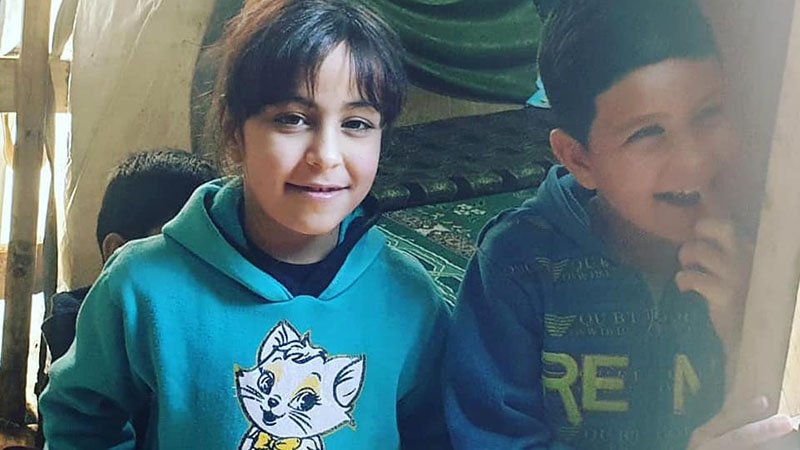 A brother and sister in the camp. For all their often wretched living conditions the children’s smiles were always a wonderful sign of resilience and hope

For all the misery the Syrian people have endured over the last years – some children have been living in makeshift tents all their lives – this girl’s cheeky, joyful, defiant smile proves the human capacity to endure, whatever the conditions.

I’d spent the previous stormy night in Akkar Province with the charity Relief and Reconciliation for Syria (RRS), run by hulking, dynamic founder, Fritz, and two stalwart volunteers, teacher Mo, a jolly Lebanese local who lived in New York for years and now sounds like Tony Soprano – just much more benign! – and Michael, a gifted musician from Switzerland. 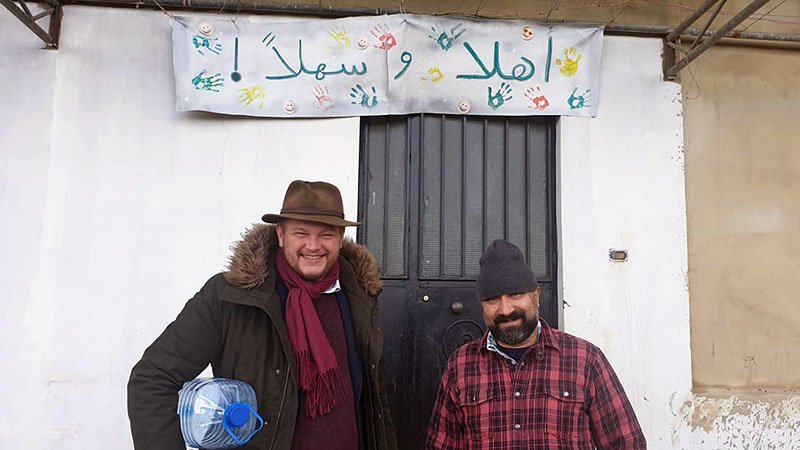 Fritz and Mo outside an RRS classroom in one of the many refugee camps near the Syrian border. Fritz is a human dynamo despite smoking cigarettes with more gusto than Keith Richards

Fritz, who smokes cigarettes with a gusto to rival Keith Richards, set up RRS seven years ago to help support and educate Syrian refugees in Lebanon: astonishingly there are now over a million Syrians here.

By tirelessly fundraising and never giving up despite constant set backs – most recently street protests after the crashed Lebanese economy (one US dollar is approx 2000 local Livres) – RRS fights on.

It was heartening to see volunteers, many local, do all they can for these refugees living in long term limbo – and, in turn, the joy and resilience of the kids, despite often wretched circumstances.

I’d travelled by bus up from Beirut to Akkar and today kicked off my walk through Lebanon (no Koko, just my rucksack) from high up the dramatic north coast with its wild, cocoa coloured waves and crazy drivers, some who manage to steer, send a text, smoke, drink coffee, eat a kebab and give a friendly honk on their car horns all at the same time!

What suffering this region has endured but, as Kahlil Gibran long ago noted, and the girl in the photo shows, what strong souls endure.

The splosh of the Mediterranean, the scent of brine and wild garlic and the dusky blue horizon framing Anfeh’s ancient harbour. 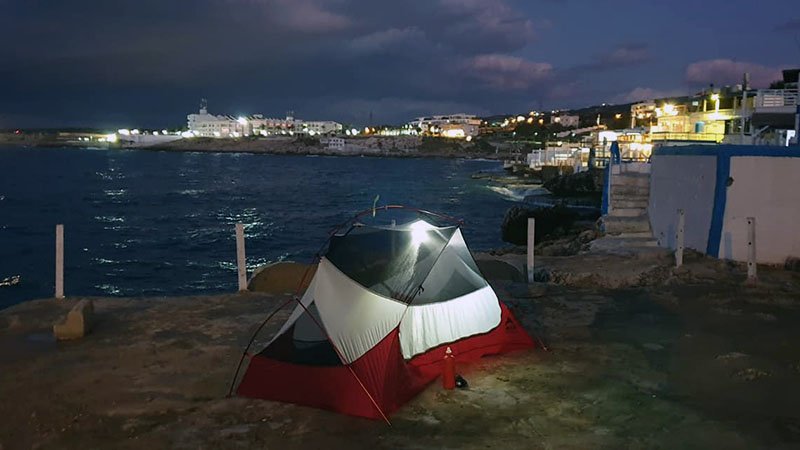 Camped by Anfeh’s ancient harbour, a launch point for the ancient Phoenician traders, who also masterminded the first known alphabet

It’s a view that hasn’t changed much since 2500 BC, when the Phoenician traders ruled the waves and cracked the first alphabet.

Walking Lebanon’s coastline, the whole place still thrums with history: a Roman pillar here, a Greek statue there – and for the last two nights I’ve been lucky to doss down in two historic churches – St Stephen’s in Batroun and St John’s in Byblos. Good on you Father Francois and Father Charbel – Christians in the best sense of the word. 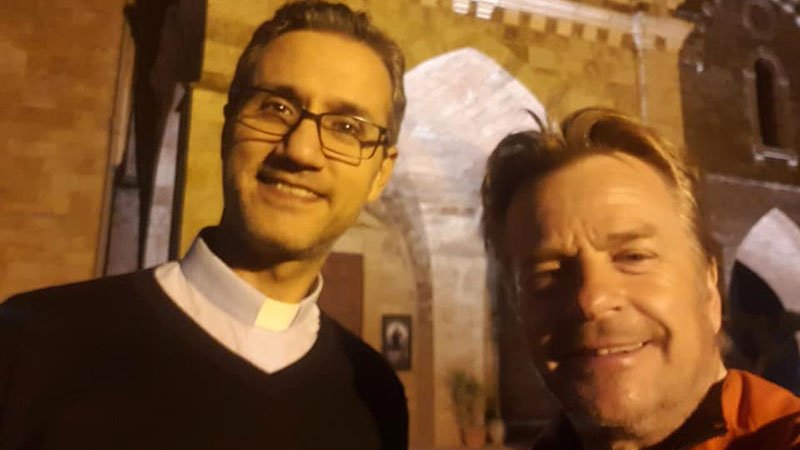 With generous Father Francois, who allowed me to sleep in the hall of Batroun’s ancient St Stephen’s Cathedral, watched over by the pictures of the Virgin Mary and several popes

Lebanon has slowed me down, partly due to military check points (big guns but big grins too, not in the least heavy), partly down to lugging a backpack instead of pushing Koko, but mostly down to the ever sociable locals. The Lebanese are champion yarners and their troubled, enchanting country is thought by some to be the home of the first story ever told – the Garden of Eden.

Facts I have learnt over the last days: 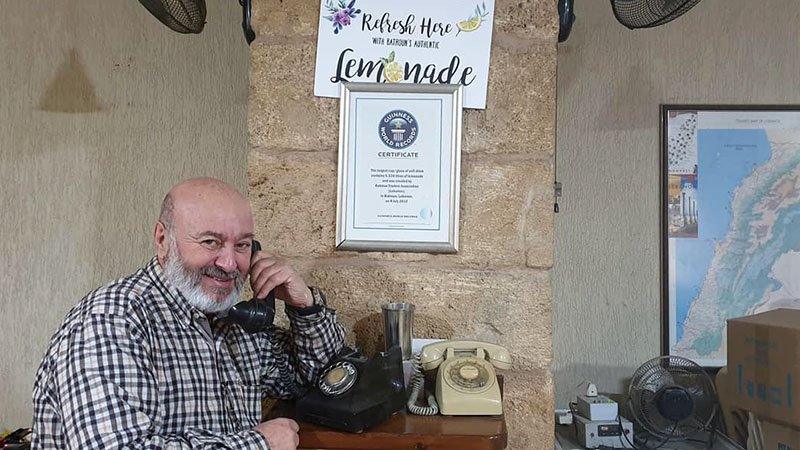 Nege, a Batroun legend, who helped coordinate making the largest glass of lemonade in the world – over 5000 litres

This joyous notch on the map was hit a few days ago but walking Lebanon has been so mind popping I’ve had other distractions – a snow storm and a night in a police station to name but two. 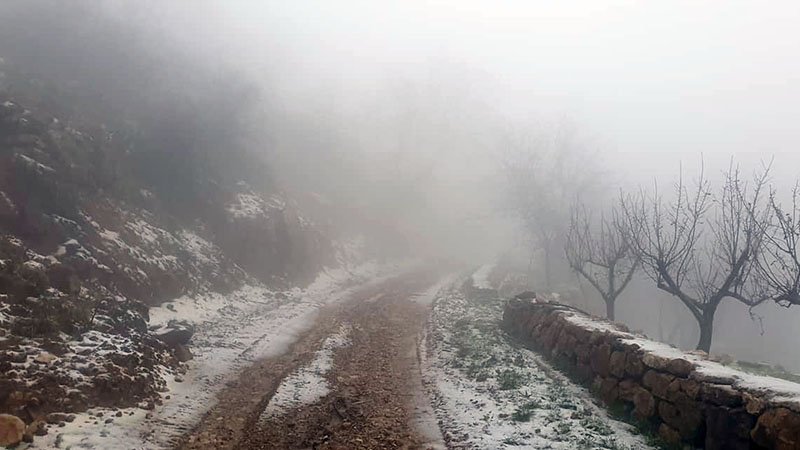 On the misty hills above Dahr El Baydar. When the sleet and snow came out of nowhere the whole situation became fleetingly high octane

Hiking over hills near Dahr El Baydar, I left the paved road for a mud track. At first all was fine, then the drizzle turned to hail, then full on snow: worst of all, a real peasouper fog.

I tried to stay calm but sweated when I saw my phone was near dead. Fool. I’d forgotten how swift the weather can turn in the hills. Never known sleet as brutal as this.

Soon, the mud was turning white under my feet and I was skidding about like a cow on skates. Fear kicked in, I took some deep breaths and slogged on through the white haze for what felt like an eternity but was no more than an hour.

When I reached the paved road again my heart was pumping furiously. Seeing car lights in the distance I cheered and swore with glee, dancing about on sodden feet.

In the car were big hearted Rima and Daniel, who called me a ‘crazy bastard English’ for refusing a lift, but kindly directed me to the nearby police station to get shelter. 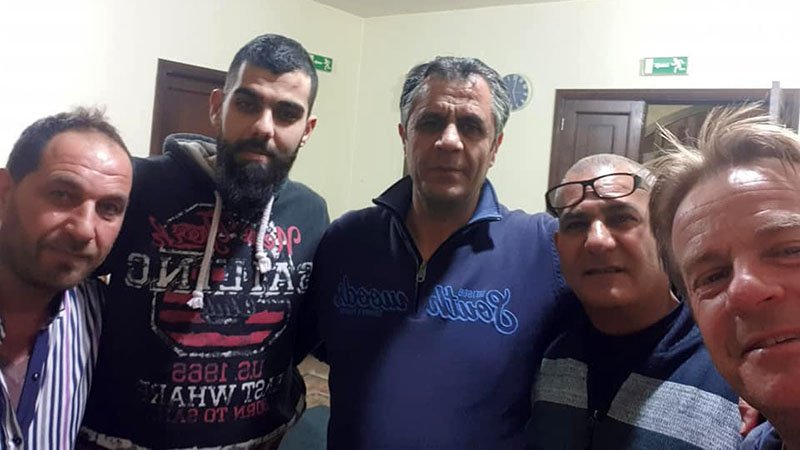 A million thanks to all at Dahr El Baydar Police for letting me dry out and doss down (out of the cells!) and to Amr and family (pics) for divine pastries and a dry shirt! 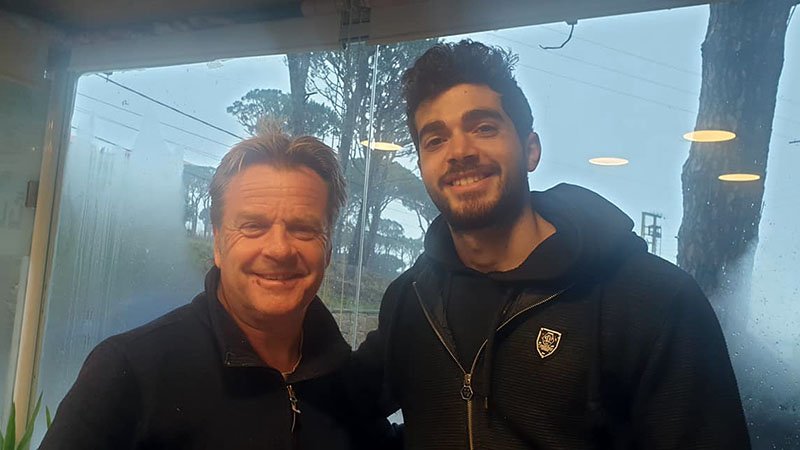 With Amr, whose family run a bakery near Dahr El Baydar, and who let me dry off my soaked clothes, fed me pastries and even provided a dry T shirt

Yesterday I walked through more icy rain to Masnaa on the Lebanon-Syria border. Now plotting a safe way forward. 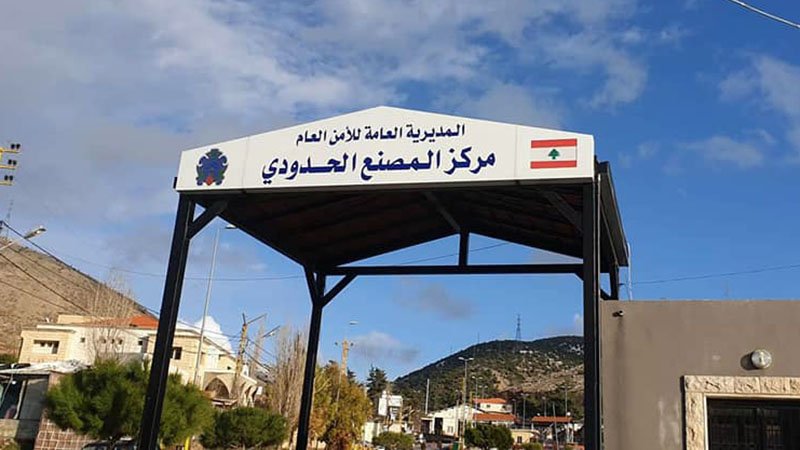 Syrian-Lebanese border point, with the two flags on display, at Masnaa

Lebanon has been hard yakka at times but all the more exhilarating for this. Wifi and my Spot GPS patchy, the weather fierce and fickle – as is the politics – but the crazy, kind, resilient, ‘live for the minute and don’t let the bastards get down’ minded locals are a delight. 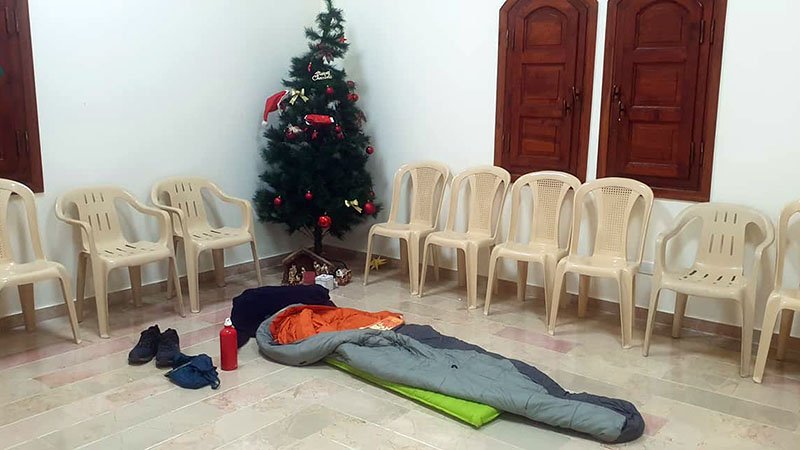 Thanks to all at St John’s Church in Byblos (Christmas tree – still up!), to Majd and Maryam at cosy Hostel Beirut. And to all of you for following my walk, in whatever way, these 6000 messy, magical miles. It means a lot.

Though impossible to name all I hope I’ve thanked the lion’s share of the many kind souls who have helped me on the road over the last weeks. Thank you Gabriel, Sleiman, Debbie in Anfeh, Nege, Liliane, Lea, Joya and Maron in Batroun and Lara and Vanessa in Byblos. Thank you. Merci. Gracias. Danke. Hvala. Blagodarya.Tesekkuler. Shukran. Xiexie. Special thanks to Fritz, Mo and Michael at Relief and Reconciliation for Syria in Akkar, Andrie in Larnaka, all the guys at Coffee and Co in Tripoli, Father Francois and all at St Stephen’s Cathedral in Batroun, Father Charbel, Maria and Mark at St John’s church in Byblos, all at Hostel Beirut in Beirut and Hostel Seed in Tropoli and a big shout out to all the police at Dahr El Baydar and the others Rami, Daniel, Amr and co who helped me during the snow storm.

As always, if anyone can spare a bean for any of the three magnificent charities I’m raising money for on my walk, it’s hugely appreciated. Donations can be made direct to them or via the Just Giving Donation page.

Many thanks too, to my old school mate, Sean, who has been brilliant at mapping my route despite often very weak GPS signals in Lebanon.

If anyone has read this far, I salute you! Cheers and have a great week.