Hope 2020 has got off to a cracking start for you all.

I certainly had a White New Year with snow everywhere – and sometimes a jolly combo of sleet, hail and rain – but this was more than made up for the incredible warmth and generosity of the rural Turks.

Today, after weeks of chilliness and having walked down from the Servatul Pass, the sun gave out heat for the first time in ages and I joyfully cast off my thermal underwear (ok, too much information). Tomorrow it’s only another 10 kms and I will reach the sea and catch a night ferry to Cyprus from Tasucu. I’ve now walked over 1000 kms through Turkey, north to south, and will miss it terribly.

Gule Gule, all you wonderful Turks, the rest of my Middle Eastern route is still a work in progress but I’ll be sure to keep you posted… 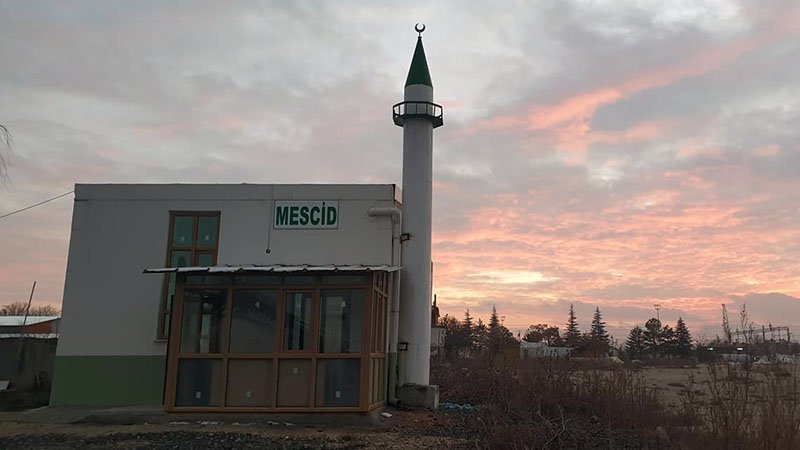 This tiny mosque, framed by a dazzling evening sky, provided welcome shelter last night in the village of Kasinhani.

I’d walked 20kms and the air was icing up, pre snowfall, so I ducked into a truckers’ cafe, where the hearty crew kindly said I could bed down amidst the prayer mats and rosary beads in the nearby prayer hall. 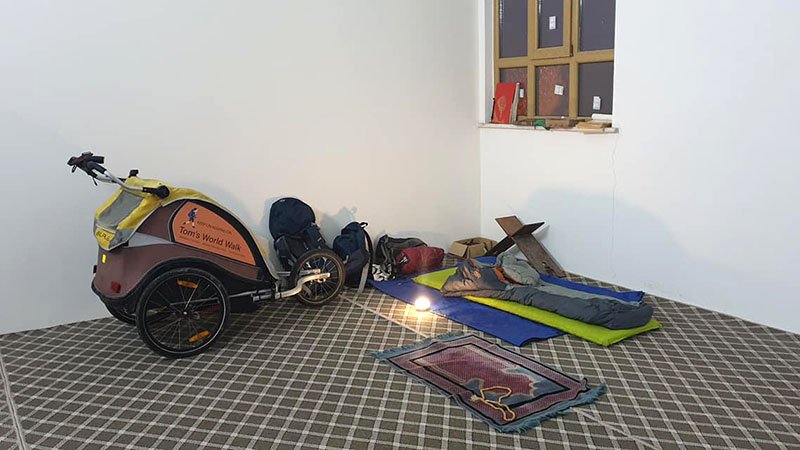 Soon I’ll have slept in almost as many mosques as I have churches!

I’m not very religious but I do enjoy the solace of sleeping in places of faith. This mosque was set up primarily for truckers, who came in during the night, saw me in my sleeping bag, waved, then knelt and whispered their prayers. Other than needing the occasional pee in a fringing paddock (we pee more on cold nights, the kidneys are under more duress and urinating conserves heat) I slept soundly, before the muezzin blasted me awake at dawn.

The day before I’d walked from another spiritual place, Konya, home to the famed 13th century Persian sufi and poet Mevlana, alias Rumi. 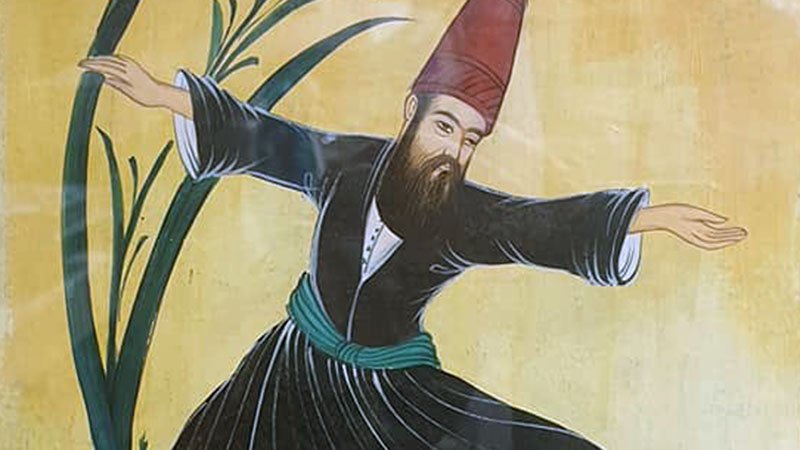 A Whirling Dervish spinning himself into a state of spiritual ecstacy. Impressive, especially with the full on headgear and Ottoman winkle pickers

In Konya, Rumi sparked the Whirling Dervishes, sufis who devotedly whirl themselves, not unlike human spinning tops, into states of spiritual ecstasy. Turkey attracts up to 2 million Iranian tourists a year, many to Konya where dervishes of yore are buried in beautiful tombs amidst rose bushes. 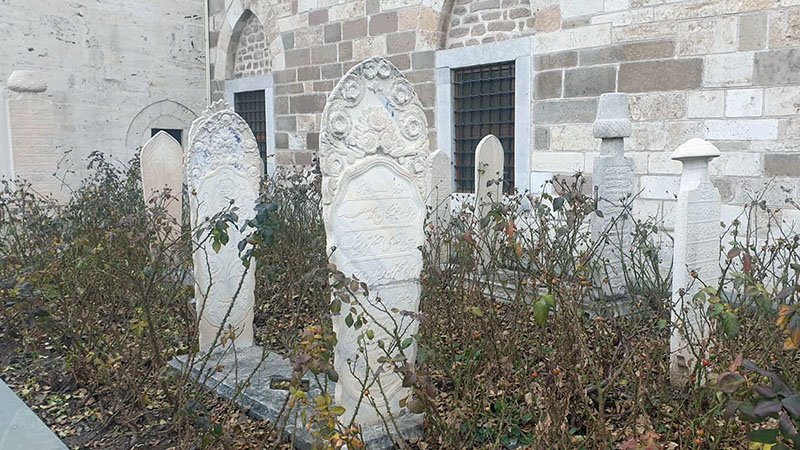 Beautiful gravestones amidst rosebushes at the Mevlana Museum in Konya, home of the Whirling Dervishes

It felt good to spend time in such fine spiritual settings. What with fires in Oz and tensions ramping in Iran the world needs prayers. I also said a prayer for my childhood friend, Rob, who tragically, especially for his lovely family, took his own life on New Year’s Day.

Growing up Rob was mischievous, funny, kind, charming, self effacing and a whizz with the girls. A great mate. I was sad we lost touch.

Walking today, I thought fondly of Rob, on a Chopper bike, playing French cricket, thwacking conkers or off to the latest Bond film (the Roger Moore years).

Good friends mean the world whatever age. Check up on them, take the piss out of them, love them, fight their corner, tease them, bless them, be loyal, never cruel, laugh a lot and forgive easily. Don’t ever give up on them.

RIP dear Rob. May your soul whirl wild and free as a dervish.

The road may be straight but the sky threw Koko and I a surly combo of rain, sleet, hail and snow over the last days.

The great thing about the Turkish boondocks though is that you know you will always find somewhere to roost.

After being put up in a Truckers’ Mosque in Kasinhani, I got caught in a hail storm two days later – like ball bearings pinged from a pea shooter – and sheltered in tiny Kuzucu.

At first the locals didn’t know what to make of this soggy hobbit with a baby buggy, but then a farmer who had past me earlier in his tractor invited me to the village hall. 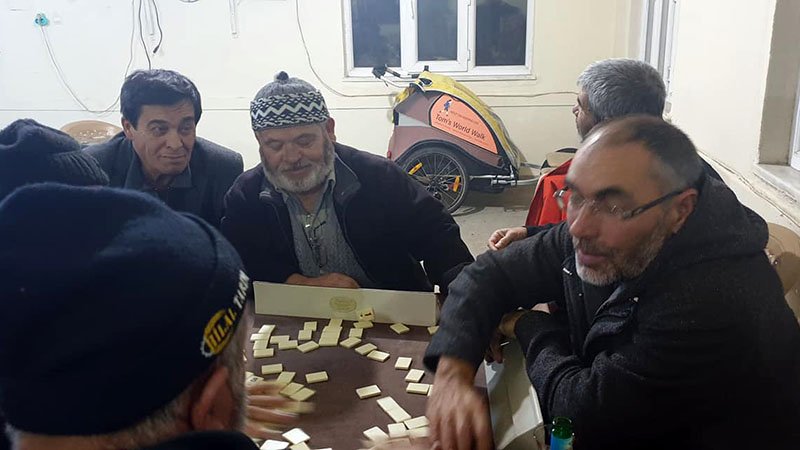 Village elders in tiny Kuzucu playing OK! – a Turkish fusion of Dominos and Mahjong with lots of added table slapping

Soon I had my clothes drying by the wood stove as I supped on blood warming cups of tea and played OK! – a sort of Turkish fusion of dominos and Mahjong with lots of spirited table slapping. A great evening. 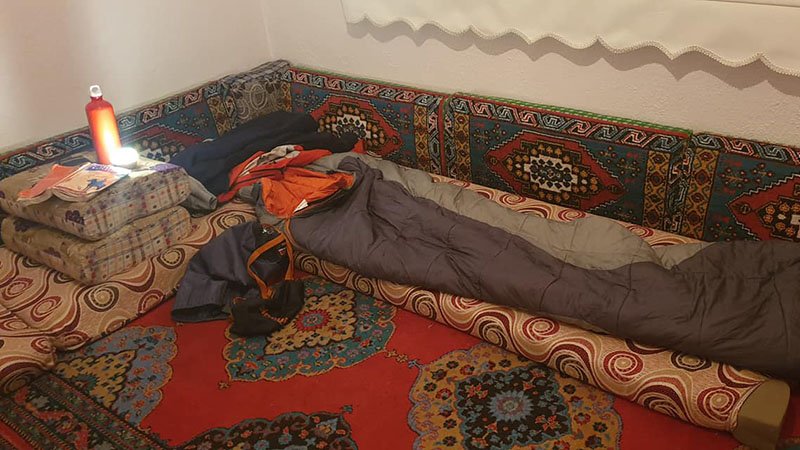 I slept on a prayer mattress fit for an imam and the following day headed to the tortuously named town of Kazimkarabekir through drizzly snow.

After a 17 miler I’d reached the outskirts and pulled into a little cafe run by lovely Hilal and Derya. I ordered rice and beans and asked if there was somewhere I could find shelter. 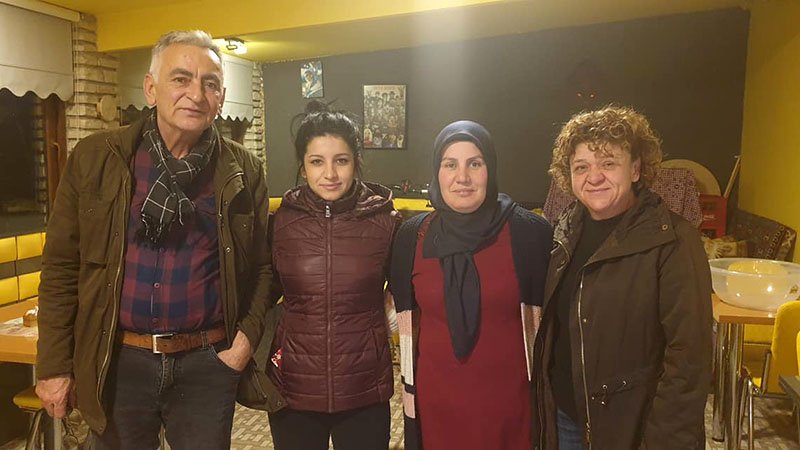 ‘You stay here,’ Hilal insisted, laughing, as if they were expecting me. I was gobsmacked. They’d known me less than two minutes, hardly spoke any English and were inviting me to sleep on their couch. I gratefully accepted as it was sleeting like fury by then.

This sort of reckless hospitality in Turkey never ceases to inspire and humble me. It’s just astonishing. Thanks Hilal, Mustafa, Derya and Fatma for your balloon sized hearts.

Last night, after another 17 miles I reached snowy Karaman and was put up by Reza, an Iranian refugee, who fled his home six years ago to escape the repressive regime. 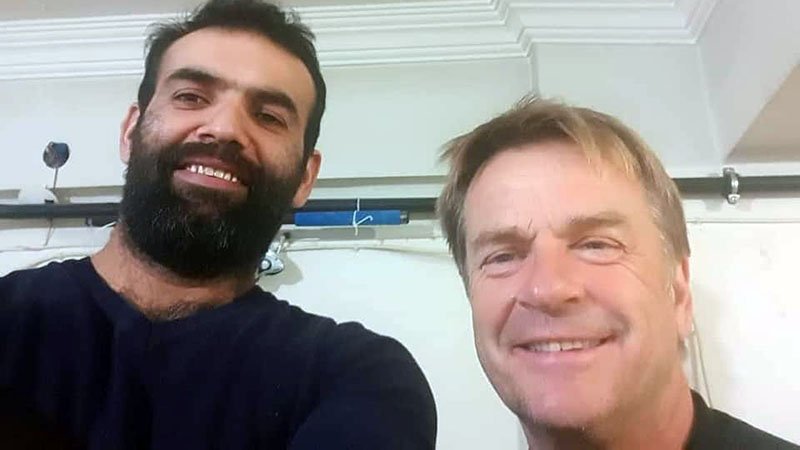 In Karaman gentle giant, Reza, an Iranian refugee was my Couchsurfing host

He has virtually nothing to his name. In Iran he was a lawyer but now works in a PVC factory. He lives in a tiny bedsit but was still prepared to let me sleep on his floor. Despite his tough circumstances Reza impressed me with his grace, optimism – and humour.

‘The next hills you walk have wolves, Tom,’ he grinned. ‘Watch out. They love English steak!’

Over 1000 kms walked in Turkey now! Good on you Koko, my loyal buggy.

Tonight, after a 22 miler, I’m camped in a forest clearing not far from the Turkish south coast: a ferry to Cyprus beckons at the weekend.

The last few days have been crazily diverse, from the stunning, icy cold Sertavul Pass (1650 m) to the olive groves and apricot orchards far below. 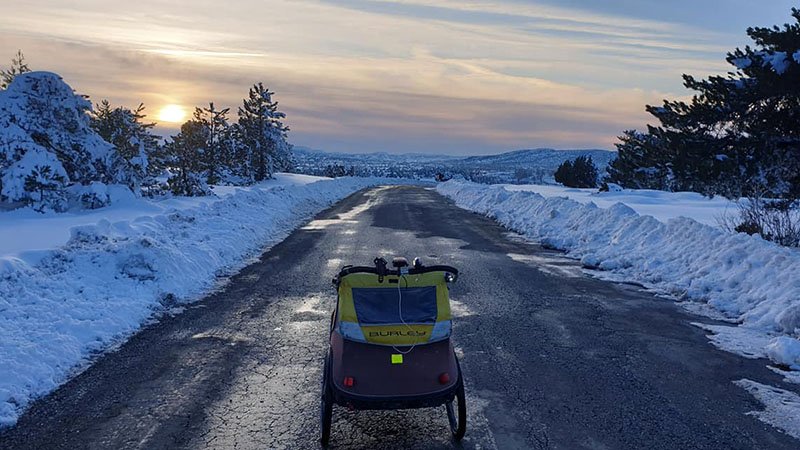 Slogging up towards the Sertavul Pass. It was icy cold but, once over, it was a day of downhill and back amongst olive groves and apricot orchards

My hosts have been equally mixed. In snow-dusted Karaman, Reza, an Iranian refugee and gentle giant kindly let me sleep on his bedsit floor and in Mut I was invited to the wonderful Ozel Egitim School, for children and adults with learning difficulties, and slept in the nearby Teachers’ House. 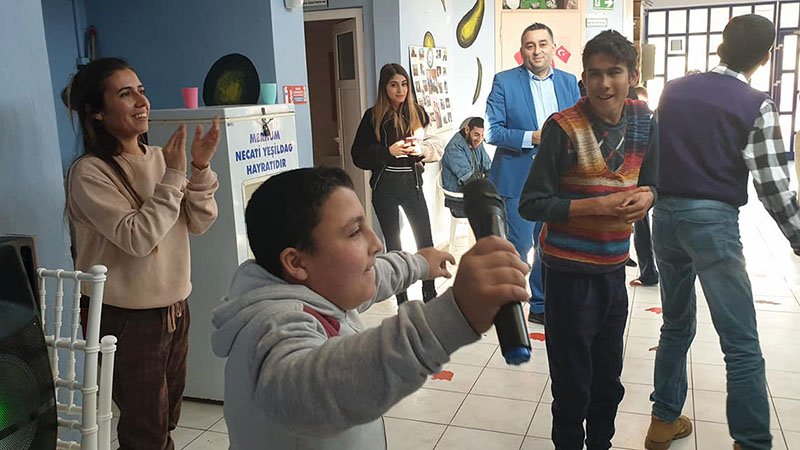 Some of the students have autism, so Aydin, the dynamic head, and the other teachers were interested in The Puzzle Centre – one of the brilliant charities I’m walking for.

It was a joy to spend time at a school with such a joyous atmosphere, the teachers all so engaged in their classes, and an exuberant song and dance session to close the day – plus some pet rabbits and chickens! 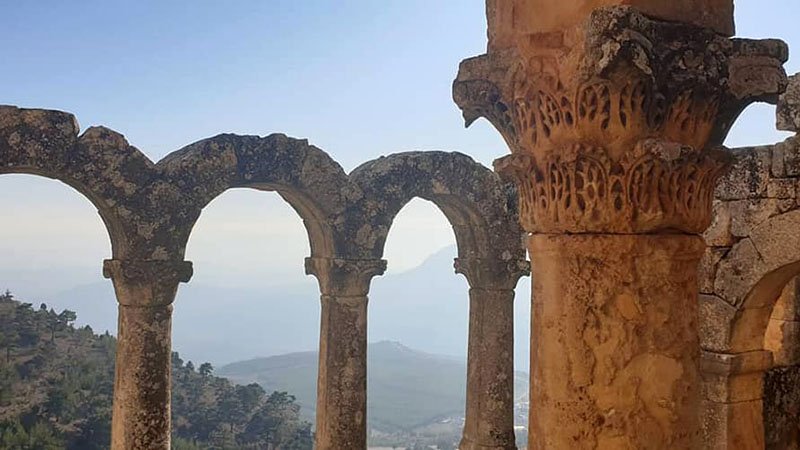 Later we visited the jaw droppingly lovely ruins at Alahan Monastery and a venerable olive tree over 1300 years old with bark as grey and gnarled as stone – and still producing fruit! 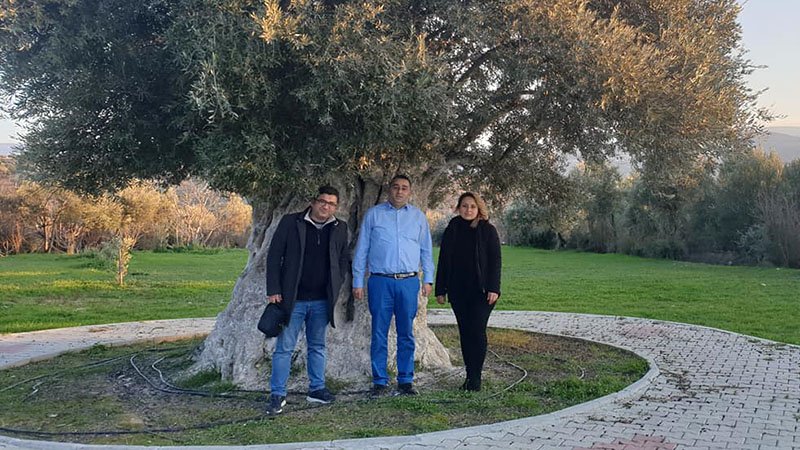 Aydin, Sidika and Murat infront of a 1300 year old olive tree in the Mut valley

The Mut olives are deemed to be especially tasty as the strong local wind (lots of wind turbines lining the hills here) helps blast away blights and mites.

Thank you, good folk of Mut, especially Aydin, Erhan, Murat, Sidika and all the lovely teachers and students at Ozel Egitim – and for the beautiful hand-made scarf too! An unforgettable pitstop.

As I write this from my tent, I can’t believe my walk through Turkey is almost done. For all the arresting landscapes and bracing weather of the last weeks, it is the big hearted locals I’ll remember most.

This is one country you’ll never walk alone.

Special thanks these last weeks to Mustafa and Dede in Ilgin; Yilmaz and Fadma in Kadinhani; all at the Zafer Hostel in Konya; to all at the Truckers’ Mosque in Kasinhani; all the lovely locals who put me up in the tearoom in Kuzucu; super trusting Halil, Mustafa, Derya and Fadma at Godze Tantuni kebab shop in Kazimkarabekir; gentle giant Reza in Karaman; Aydin, Erhan, Murat and all the splendid gang at the Ozel Egitim School in Mut; all at Camkaya Cafe near Kargicak for letting me camp and all at the Teachers’ House in Silifke.

Thanks too for a whopping £300 donation to the Alzheimer’s Society from Oasis Events in the Cotswolds run by my dynamic, generous cousin, Mark – if you need an event organising Oasis are total pros. Thanks too to big hearted sis, Fanny, for a further £200 to the Alzheimer’s Society and to Padrino Peter for his kind donations last year to The Puzzle Centre and Medical Detection Dogs.

Very belated Happy 2020, let’s do our best to keep on keeping on and here’s hoping great things await you on the road ahead…