Ho… Ho… Hope this finds you in the festive spirit! Did you know Santa comes from Turkey? If not, read on.

Last Christmas I walked through an area of Texas called The Big Empty but was lucky to find a food shack run by three Mexican sisters who gave me a Santa hat and cooked up a turkey burrito. So, though alone much of the time, this sweet gesture made my day.

This year I’m not walking because I’m blessed to have my daughter, Eliza, with me. I clocked up as many pre-Christmas miles as possible in central Turkey where I left Koko stored in a friend of a friend’s parent’s garage! I will leave her there (in the town of Ilgin) until Dec 28 when I hit the road again, after spending Christmas with Eliza. Such a treat, and Koko needs a rest too!

Well, the mist, ice and rain may be grim – the mercury has nosedived over the last days – but don’t be fooled by my beardy scowl. 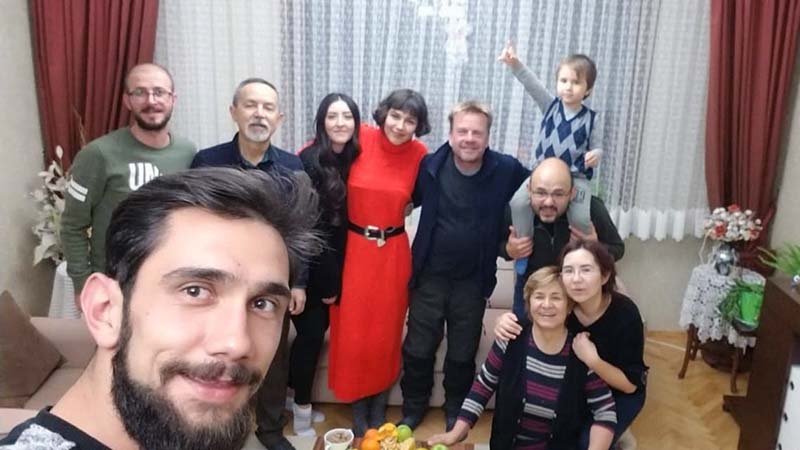 After slipping up a muddy, snow caulked trail, I yomped down into Bozuyuk two hours late for my lovely Couch Surf hosts Hakan, Kubra and their toddler son, Khan.

Enjoyed a slap up meatball feast and an animated chat with a posse of Hakan’s biker mates before collapsing into deep, delighted slumber.

The next day a power cut struck off all the local electricity supply. My problem, hiking cart Koko was stuck behind Hakan’s unbudgeable garage door. It would be 2pm before power was due to return.

For this reason I ploughed on with just a backpack on the 33 km road to Eskisehir, with Hakan happy to transport Koko in a truck once power was restored.

I walked into Eskisehir like a dead man but was soon boosted after being welcomed into the home of Kubra’s big hearted parents for home cooked food, a shower and a reunion with Koko. 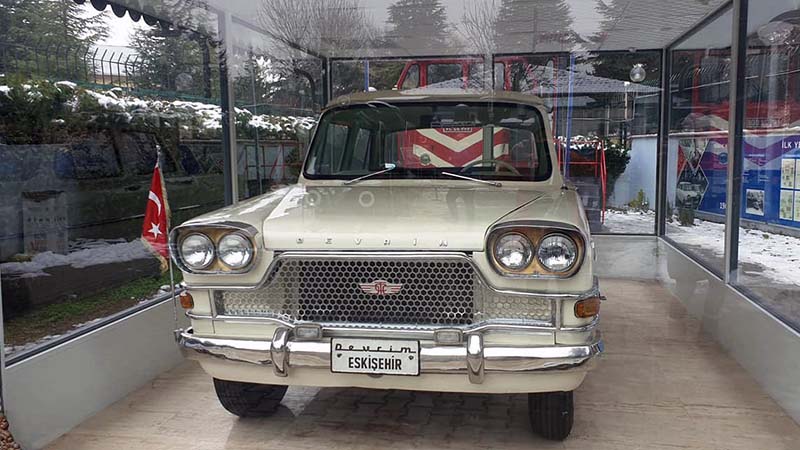 The Revolution ‘Divrem’ Car in Eskisehir. Only four Turkish manafactured cars were ever made, all in 1961

The next day Hakan, Kubra, Kubra’s brother, Erhan, and wife, Secil, and I had a wander around the pretty, pedestrianised old town. We also visited the Revolution ‘Devrim’ car, one of only four original Turkish-made cars dating back to 1961. Story has it one of the Divrems was being displayed to the president and conked out mid parade. And that was that! No more Devrims! The one in Eskisehir is the last survivor. 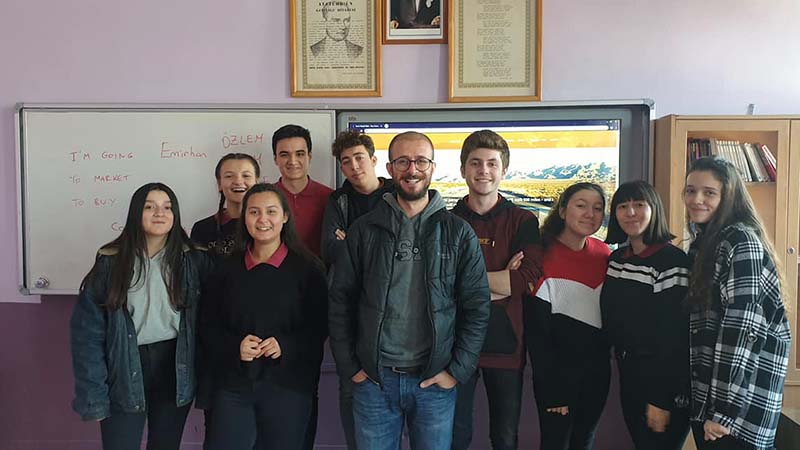 While in Bozuyuk I gave an English class at the sixth form college Hakan teaches at. It was the first time most of them had met a native English speaker

Next morning I gave talks at the schools where Hakan and Kubra, both teachers, worked. Great fun. My favourite question: ‘Teacher, who is your favourite Turkish rapper?’ Now that left me truly banjaxed!

After the classes I walked on to Erhan and Secil’s and had a blast with them including a visit to the buzzy Pedal Cafe, where journo, Deniz, interviewed me.

I’m like a hairy, buggy-pushing baton being passed from one home to the next on a trail of one family’s amazing goodwill.

Yesterday, beyond Eskisehir, Erhan arranged for me to stay on the couch of his kind farmer cousin, Enver. An absolute gent. 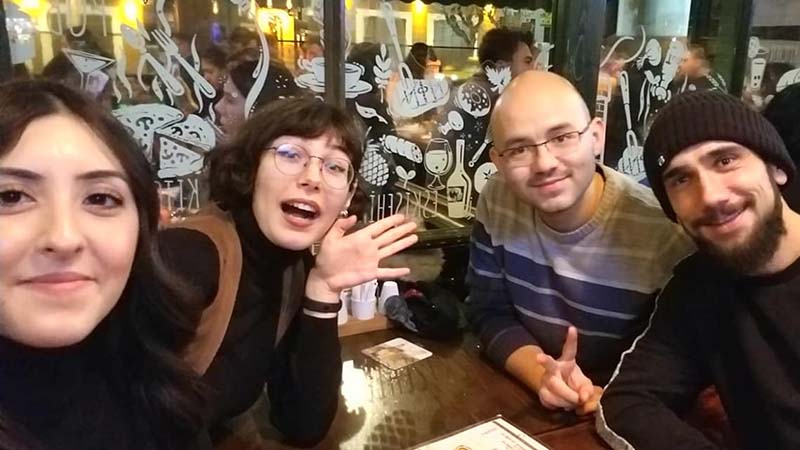 With dynamic couple, Secil, Erhan and friends in Eskisehir. They have provided me wonderful contacts across half Turkey

Today, a misty 35 km to Cifteler. Thanks all. 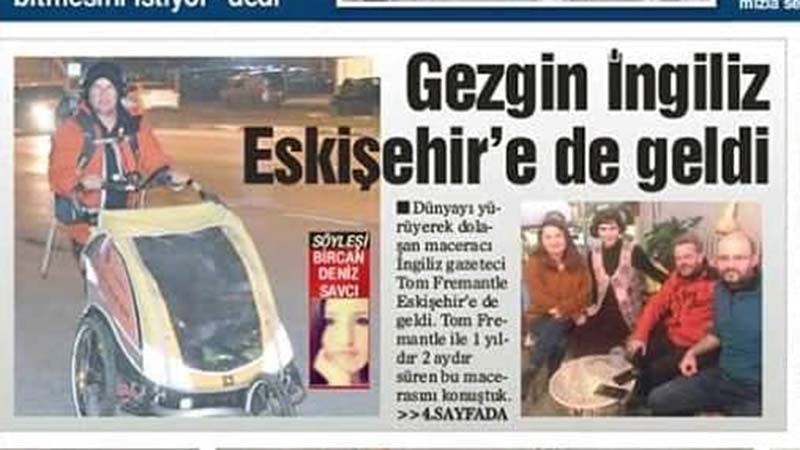 Stop press! Koko and I hit the front page of the Eskisehir Herald. Our 15 minutes of fame up

Stop press! Koko and I hit the front page of the Eskisehir Herald. That’s our 15 minutes up!

Over the last days I’ve stayed on couches, carpets and sofa beds in homes, farms, workers’ hostels and even a mosque.

After leaving Eskisehir I was put up on a sofa fit for a sultan at the little farm of the Cam family’s cousin, Enver.

Enver grows everything from pumpkins to goji berries, vines to walnuts – not forgetting his chickens and bees. A one man The Good Life.

Big hearted Enver was worried for my safety and insisted on giving me a Crocodile Dundee style knife. I said I never carried a weapon but he would not back down. So now I have a knife fit to slay dragons, little ones admittedly, but dragons nonetheless. 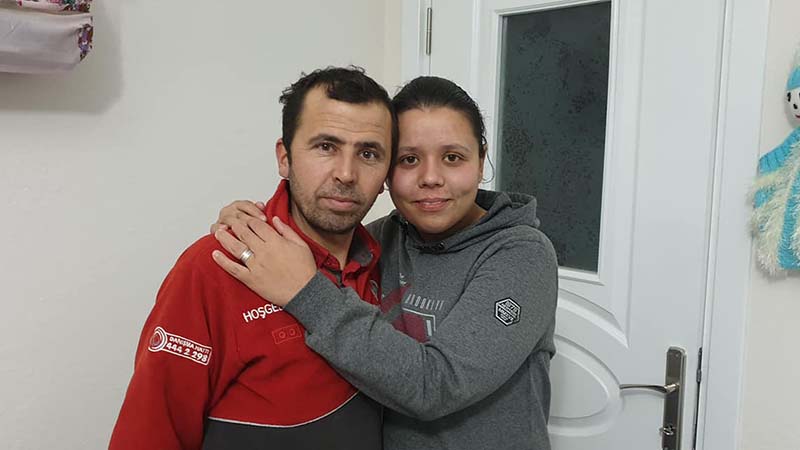 Harun and Ece at Cifteler, a lovely couple who fed me dinner and led me to the local Workers Hostel, full of factory workers fron the local fridge factory

The next day I hiked 35 undulating kms to Cifteler, where I was told to see Harun, a mechanic at the local garage. Harun led me to his home where his wife cooked a slap up rice dish. They then kindly led me to a Workers’ Hostel, full of a jolly gang from a local fridge making factory. Barely a word of English between them and my awful Turkish: smiles, arm waving and Google Translate are wonderful things! 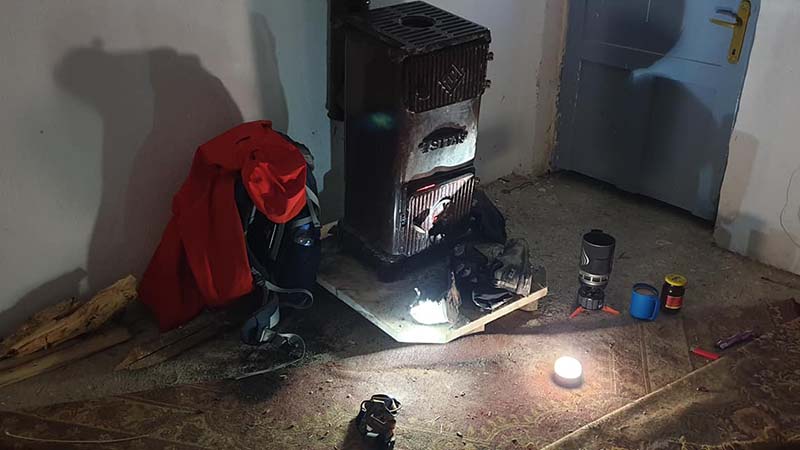 The wood burner the local lads dragged into my shack, chimney and all. What a hugely kind gesture. It turned a derelict hovel into the coziest of nooks

The next night I rocked up in tiny Kirkpinar, soaked, and asked where to camp. At first the locals seemed hostile but then led me to a derelict hut by the side of a mosque. It looked bleak but after I’d put up my tent (it was -2 degrees) and brewed tea some local lads kindly hauled in a wood burner. It was soon transformed into the cosiest of nooks.

After their initial wariness the locals could not have been kinder. The sorts who look grim faced, like they are facing a firing squad during a photo, but have real decency flowing through their veins.

I’ve now reached Cay (meaning tea in Turkish) and from here, over the next days, will march on to remote Ilgin. Here, a kind couple have agreed to store Koko, while I travel back to Istanbul to see my daughter, Eliza (can’t wait!), over Christmas.

I’ll reunite with Koko on Dec 28 and walk on towards Konya, home of the Whirling Dervishes, for the start of 2020. Whoosh! Cheers all! 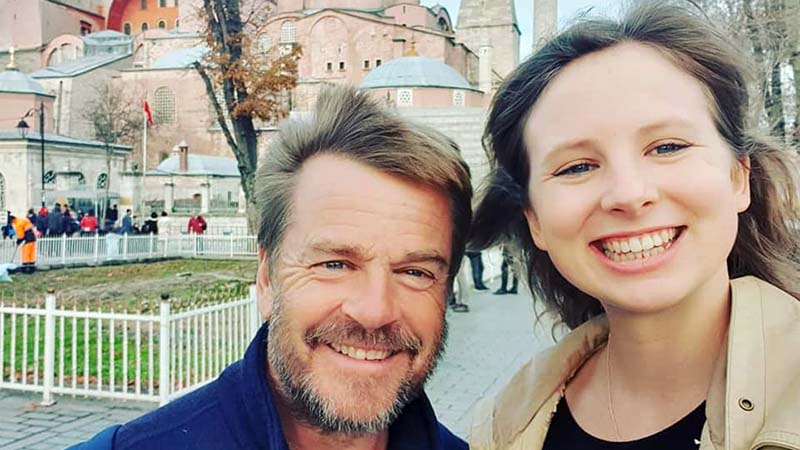 With Eliza outside Hagia Sofia in Istanbul, both in festive spirits

Back to Istanbul for Christmas – and the best present ever, my daughter, Eliza, is here!

It was a stonking 39km day’s hike to Ilgin, where generous couple, Mustafa and Dede, have let me store Koko in their garage until Dec 28, when we reunite and hit the road again.

I caught a train back to Byzantium from central Turkey which only took six hours – compared to the 20 days it had taken me to walk!

The penultimate day I’d turned up in tiny Karahuyuk and asked to camp in a park by the mosque. Local imam, Ali, came out to meet me.

I thought most imams were elderly and wild bearded. Not so. Ali is 24, shaven, with a wife and young daughter. He speaks perfect English and chants the muezzin (call to prayer) 5 times a day. 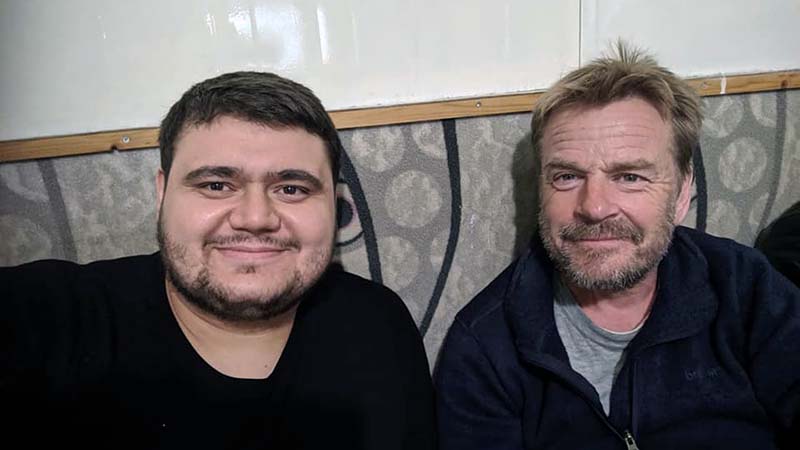 With Ali, a super friendly imam, who found me shelter near his mosque in Karahuyuk on a freezing night

Ali led me to a wonderful, smoke heavy tea house, full of local farmers and merchants, then to the village hall where I could doss down. Top result, though the wood burner got so toasty at one stage, I walked out in the freezing night in my boxers to simply cool down a bit.

Thank you Ali and co, what a kind, open spirited community.

Overjoyed to now be back in Istanbul for Christmas with Eliza, who is on sparkling form. 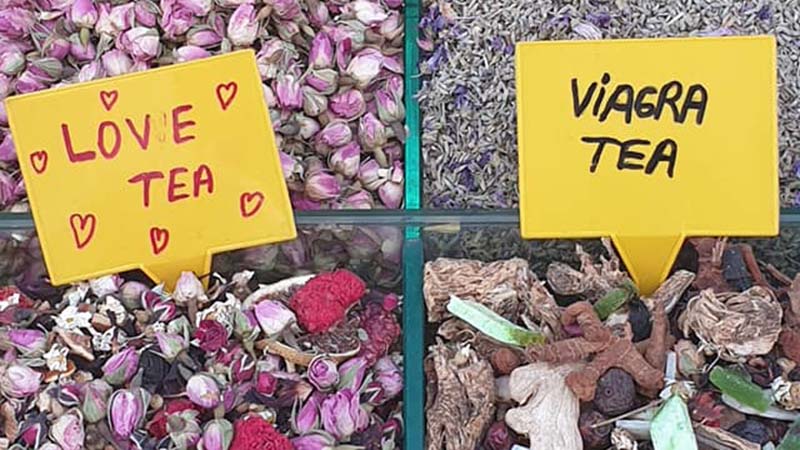 Eliza and I had a good laugh at the tea selection in the local spice market. As for Viagra Tea; well, I suppose it might stiffen my resolve to keeep on walking. Sorry!

Today, we visited a spice market, which to our hilarity stocked Viagra Tea – well, it might stiffen my resolve to keep on walking! (sorry!) – and some Love Tea.

We also saw a Santa statue. Arrestingly, Santa, alias St Nicholas, or Noel Baba, actually stems from Turkey. A wealthy man from Demre, he would climb the chimneys of poor families and throw in coins. A portrait of him in a bulky coat with a big beard led to the image of Santa today. So, Santa is real! Just without the snow, sleigh and Rudolph! 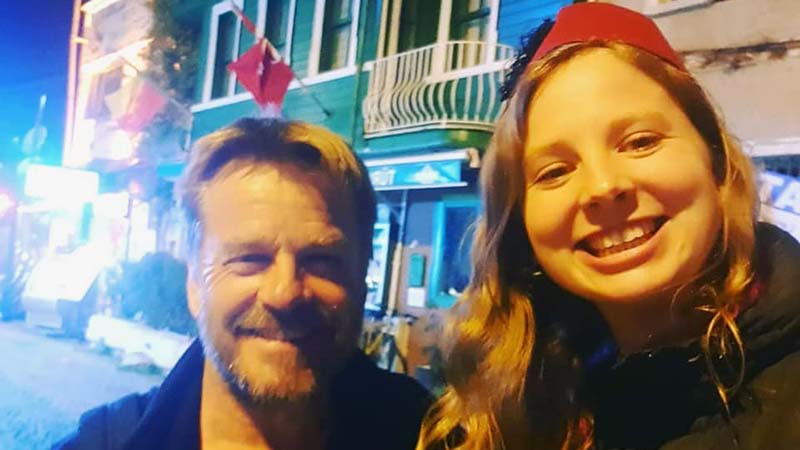 Merry Christmas from Eliza and I. Hope you’ve had a great year but if not, that the earth tilts in your favour in 2020, and lets in some light. Wherever you are, thanks so much, share some Love Tea and Keep On Keeping On!

Thanks so much to Erhan and Secil, the Cam family and Deniz in Eskisehir, to Enver near Mahmudiye, to Harun and Ece and all at the Workers’ Hostel in Cifteler, to all the kind souls in Kirkpinar, to Imam Ali and the gang in Karahuyuk and to Mustafa, Dede and son, Ramazan, for putting me up in Ilgin and storing Koko over Christmas.

I’ve witnessed so much kindness this year both from people on the road and from those donating to the wonderful charities – the Alzheimer’s Society, the Puzzle Centre and Medical Detection Dogs. For this reason it seems cheeky to request more. So rather than appealing for individual donations, though always appreciated, I wonder if anyone knows any companies or businesses who may be interested in making a donation.

I must stress I want no money for myself (the walk is not expensive and entirely self funded) but if any business/company was prepared to make a donation to any of the individual charities – or all three! – I would happily put their logo on the side of Koko and give them a shout out on social media, provided they are reputable (no ciggie brands or arms dealers!). I realise being splashed on the side of a hiking trailer pushed by a hairy hobbit in often very remote places, is not every company’s idea of good advertising, but it might appeal to some and it is for exceptional causes.

I have very few business contacts so any ideas greatly appreciated. Over £10,000 has been raised between the three charities so far, which is brilliant, but I’m really keen to secure my target of £30,000 and keep the fundraising going, even in far flung places. If you can’t help financially or with contacts, no worries at all, your support simply reading this far still means a lot. Thanks so much.

Merry Christmas, drink lots of Love Tea in 2020 and Keep On Keeping On!