Very behind on FB posts so thought I’d update with my predictions for the UK election…joking! It’s just world walking again!

Sadly, due to insurmountable long term visa issues, my Russia dream is kaput, so I’m now taking a Middle Easterly route and the good news – I am still in splendid, snow blasted Turkey, a place that has really won my heart.

The last weeks include a plunge in the Bosphorus, more Koko surgery, icy trails, a light spanking, the wonders of Couch Surfing, power cuts, wildly inappropriate tears, school talks, stints in the local press (all very jolly except one comically grouchy interview where a journo kept shoving a mic in my chops on a busy, ice slicked highway while I was in a hurry) and as always, the overwhelming kindness and bonhomie of the Turkish people. 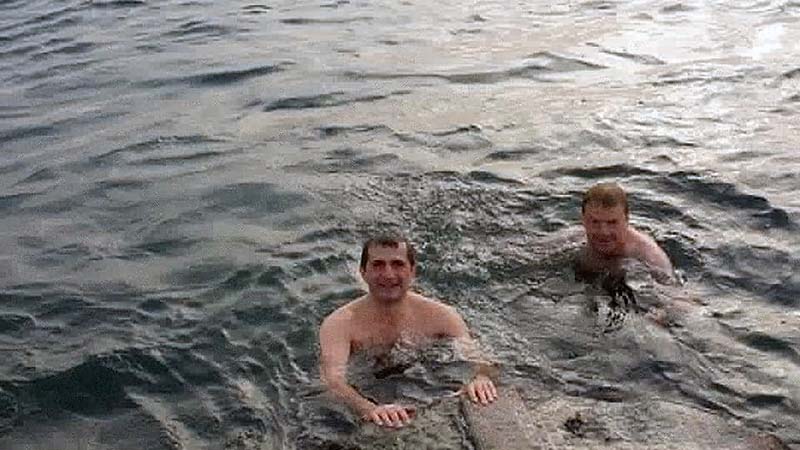 With my Turkish friend, Nuri, the only one mad enough to join me for a plunge in the Bosphorus

A walk across a continent should always finish with a plunge into the sea.

At the end of America I sploshed into a wintery Atlantic and here, in Istanbul, the end of Europe, it was a dive into the iconic, decidedly parky Bosphorus.

I was lucky my wonderful, crazy Turkish friend, Nuri, was game on to dive in too and assured me a carpet led into the water.

I thought he was jesting but sure enough, a strip of finest, Anatolian shagpile was there as a diving platform. Ok, it was actually a moth eaten, sodden rug, but it’s the thought that counts.

The water was ‘numb your nips’ freezing, but very cold water is always a splendid, neuron fizzing boon to the soul and not only lowers blood pressure but peps up the immune system.

The Bosphorus is an historic setting, the Blue Mosque’s miniarets pierce the skyline, the hills on the Asian side provide another enchanting backdrop and it’s a super busy shipping lane with everything from tankers to tugs chugging along.

It wasn’t far from here that the 16th century Battle of Lepanto was fought, a fierce naval exchange between the then mighy Ottoman navy and the Spanish fleet.

The European force won and some say it was the start of the decline of the Ottoman empire. The Spanish writer, Miguel de Cervantes, lost his hand in the battle, which led to him being invalided out of the navy. If he hadn’t been that loveable, ’tilting at windmills’ knight, Don Quixote, would never have been created.

After a few days of eating, drinking, writing, laundry, visa hunting, route planning and Bosphorus plunging I am all set for the next stage of the journey – a cargo ship to Odessa in the Ukraine, the country that bridges Europe and Russia. All going well, will set sail soon. Can’t wait. 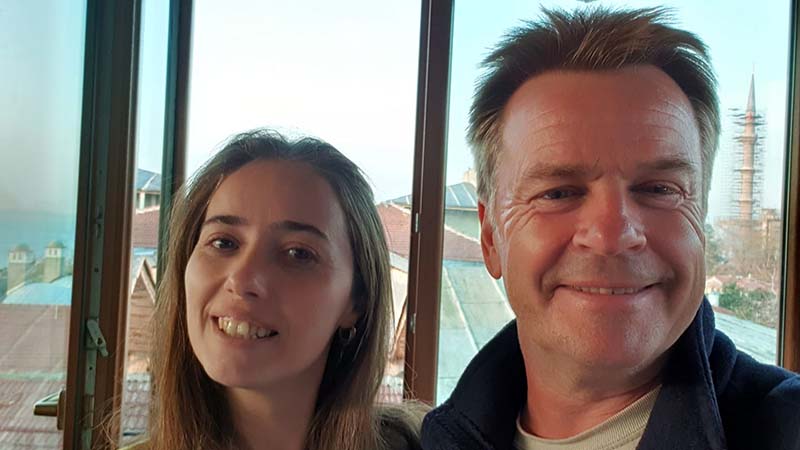 With Gulsum, a fellow lover of walking, who helped steer me around Istanbul’s beautiful, chaotic streets

Thanks to all my brilliant Turkish friends for their help this week – Nuri and Ahmed, dynamic Belcin and Selen (who kindly met up despite being super busy – pic) and lovely Gulsum (pic), who led me around Istanbul’s labyrinthine, sense blasting Grand Bazaar.

Not the best of days.

Sailing out of Istanbul with Koko but not in the direction I’d hoped. Sadly, I’ve had to abandon my Russia dreams but, on the plus side, more of wondrous Turkey! 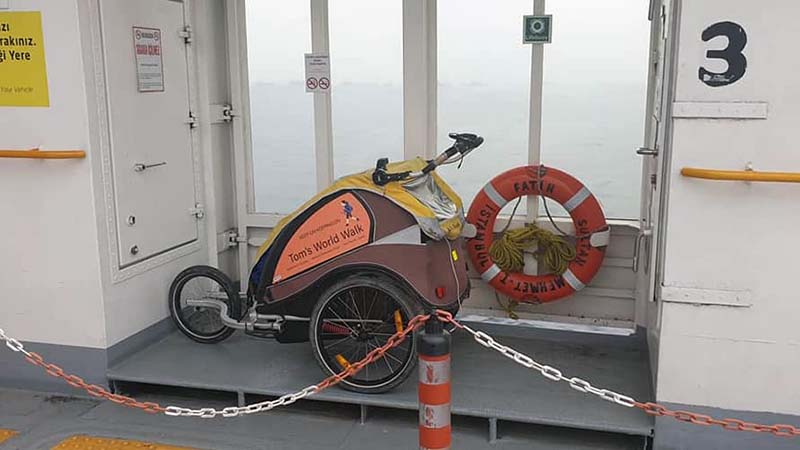 I was booked on a Cenk Group cargo ship to Odessa (the manager, Kaan, had kindly agreed to slip me on for free) but after long chats with visa specialists about Russia and the Stans, it all sounds far too hassly, restrictive, costly and uncertain.

As one door closes, another opens. Saudi Arabia, once near impossible to gain entry, is now issuing 3 month e-visas with access all areas (except Mecca and Medina), so the Middle East is my new walking realm.

Today, after a final stroll with Koko through the Grand Bazaar, I kicked off with a short ferry ride across the Sea of Marmara to the port of Yalova, from where I will walk the remaining 750km of Turkey, down to the south coast. I was allowed a ferry ride, as I’m between ‘continents’- the end of Europe, the start of the Middle East.

The rest of my walking route will unfold as the weeks pass.

Gutted to miss the Ukraine, partly as its president, Volodymyr Zelensky, was once a full time comedian, who, get this, played the role of the president in a hugely popular Ukrainian TV show, prior to winning office. What with a few other comedians in power worldwide, surely satire is now well and truly dead.

Anyway, back to today, after wheeling Koko off the ferry her main axle cracked again. Argghhh. Third time now, just hoping there’s a welder in Yalova who can help tomorrow. 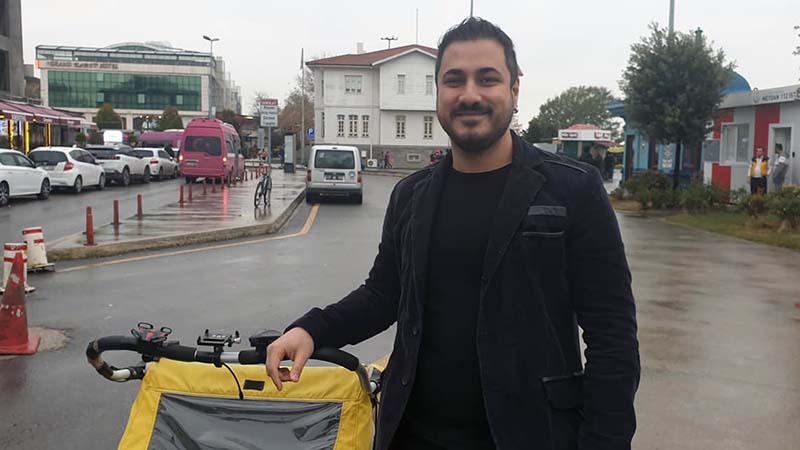 Amir, an Iranian refugee living in Turkey for the last 7 years. I met him on the ferry to Yalova and was impressed by his quiet dignity

So, all in all, a howl at the moon day. But my woes were put in sharp perspective when I chatted with calm, friendly Amir, an Iranian refugee on the ferry.

Amir had suffered several beatings in Iran due to his Christian faith. He’d fled over the mountains into Turkey, aged 19, and, now 27, has still not been back home.

He likes Turkey but feels trapped, taking scraps of translation work and praying to return to a more tolerant Iran one day.

Some places always stay with you on a world walk – like Yalova, Turkey.

Not because it was my first port of call in the Middle East or because it’s a pretty seaside town – but because, embarrassingly, it made me cry!

These days we rarely take pride in being human, but perhaps we should – the recent narwhal tusk wielding, terrorist thwarting hero of London Bridge, a classic example.

On a much less dramatic scale are Turkish father and son, Kadir and Engin, who run Gizem Bisiklet bike shop, set up over 40 years ago. 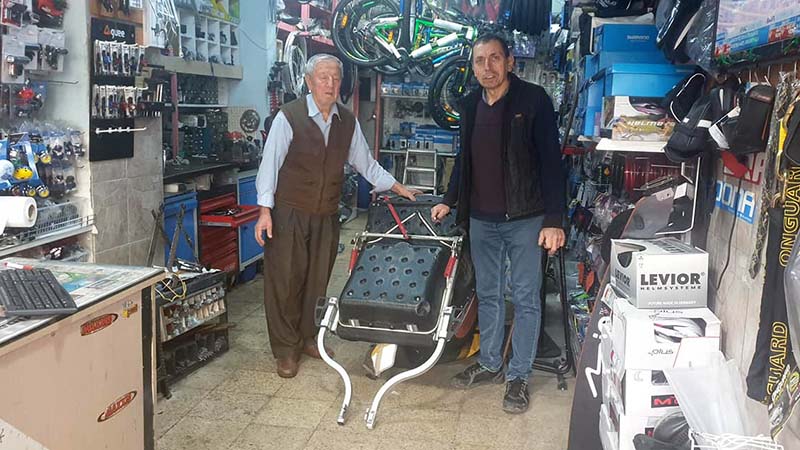 Engin and his 83 year old Dad, Kadir, who has run this tiny, wonderful bike shop in Yalova since the 1960s. Their overwhelming kindness moved me to highly inapproriate tears!

When I turned up with Koko on her last legs (ok, wheels), her main axle badly cracked for a third time, I didn’t hold up much hope. It’s a tiny shop in a tiny town.

After a brief explanation of Koko’s woes, 83 year old Kadir put his hand on my shoulder. ‘No worry,’ he said, his two words of English.

Engin and I wrestled Koko apart and then, despite myriad bikes to repair, Engin drove us to a local factory where he had some welder mates. Utter pros, they smashed and sizzled Koko’s axle back in shape (pic), diamond geezers all. 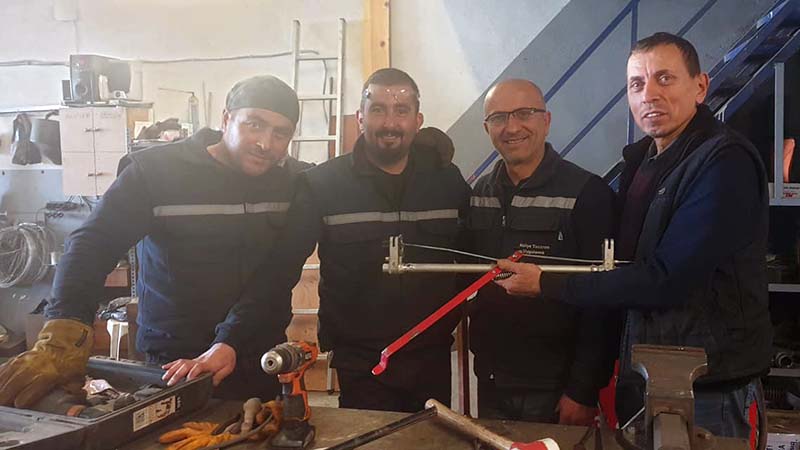 When we got back, Engin refused payment. Only after I threatened to staple Lira notes to his hand did he accept a ridiculously meagre sum.

Before I left Engin insisted on making tea. Tea in Turkey is always 100% black but Engin added milk to our tulip shaped cups. ‘You England. Milk in tea.’ Engin grinned. Kadir grinned. I welled up, overwhelmed by their kindness. They looked horrified. Turkish men are not weepers. Indeed, I doubt a Turk has shed tears in public since the fall of the Ottoman Empire, let alone over milky tea. Even Koko blushed.

I’m never usually a public blubber. Maybe it’s just hitting my 50s. Whatever it is, on this walk, little kindnesses mean the world. A world that does not spin due to strutting celebs or preening politicians, FB fools or Insta idiots (guilty!) but due to quiet, kind, salt of the earth types like Engin and Kadir. Thank you, my friends. 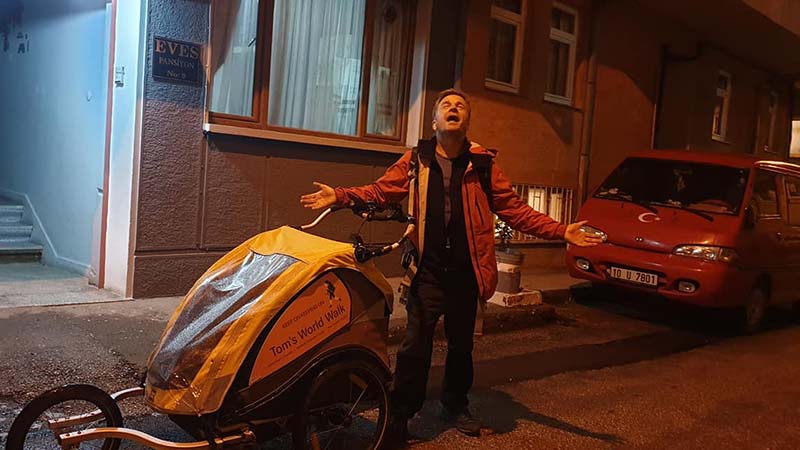 Soaked, shattered but over the moon to reach super, hobbit like Eves Hostel in Bursa

Yesterday I swerved off the busy main drag onto a path leading to Bozuyuk. The icy pines, the swish of overhead geese, the quiet white – just too tempting.

Within 3 kms the path had turned slushy and steep, the light fading fast. I alternated from slipping on sludge, snow and higher up, ice.

To stay calm I sang ‘By The Light of the Silvery Moon’, occasionally bellowing expletives when I stumbled or my head torch jinked.

Finally, I wrestled Koko to the brow and we zigzigged ecstatically down towards the city lights, two hours late for my lovely Couch Surfing hosts, Hakan, Kubra and jolly, toddler son, Khan (more on them next time).

Yes, Couchsurfing! What a revelation. Basically, you pay a small joining fee, and people, keen to meet strangers, put you up for free.

Others had mentioned it before but I’d shunned it during the good weather and long days, prefering to camp or just try my luck. Now the days are so short, knowing you have a pitstop some nights means you can still walk after dark, rather than setting up camp mid afternoon. 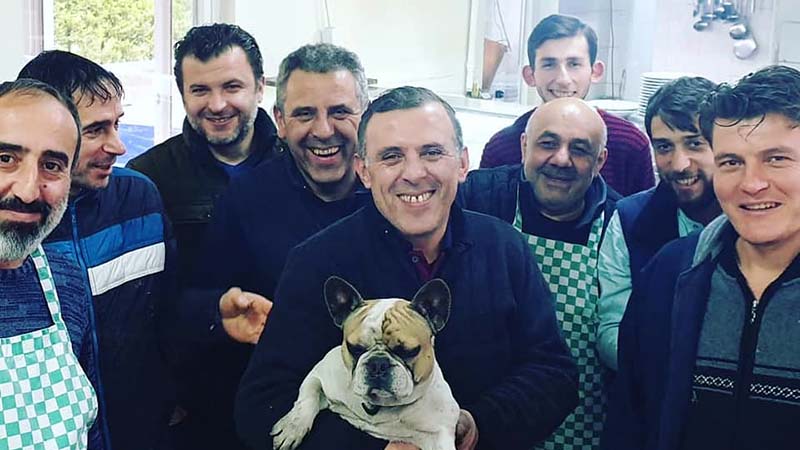 Ergun and his motley crew of cooks, welders, panel beaters, mechanics and Pepe, the French Bulldog

My first Couch Surf was in industrial Inegol with wild, larger than life Ergun, who turned up in his truck to give me a lift. I explained I needed to walk every step and had to fight Koko from his grip. It was freezing and he clearly thought I was crazy. 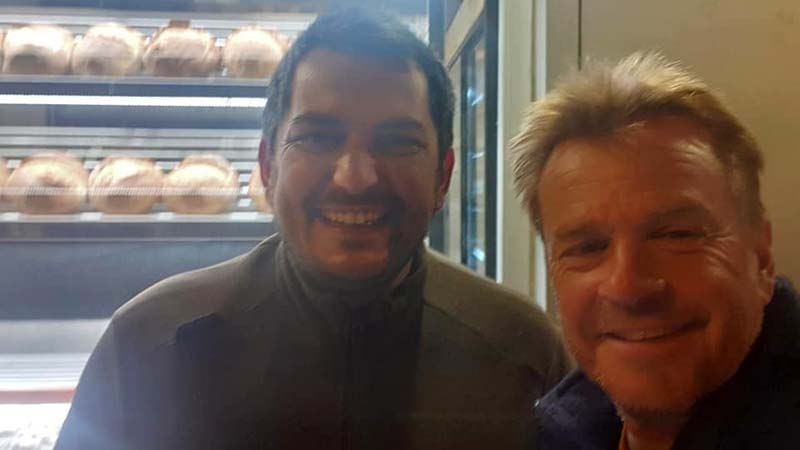 With Ufuk, my first Couch Surfing host who kindly put me up despite having a new baby and being super busy

I then turned up, exhausted, at the wrong address of another Couch Surfer host, Ufuk, who had every right to insult me – reversing the letters of his name would have been a good one – but he could not have been kinder and more patient, despite having a young family.

The next day it was pouring and Ergun, who works in a concrete factory, introduced me to half the town and took me to a budget hamam (Turkish bath) with his friend, Ali, where we were sizzled, kneaded and lightly spanked all over. I left startled but revitalised. 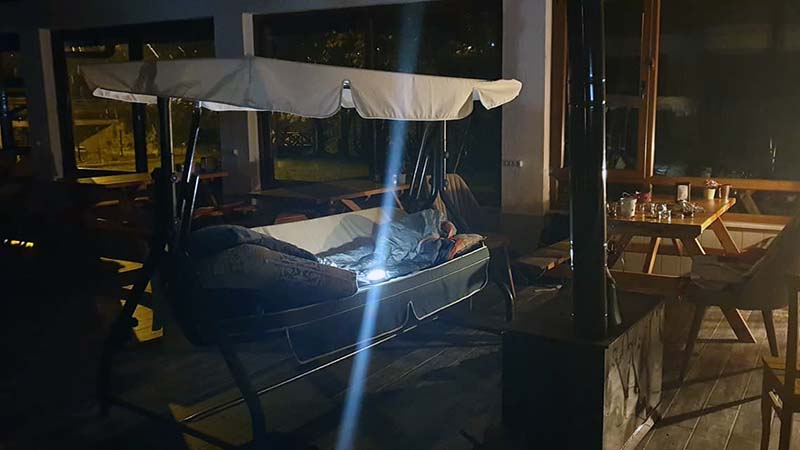 At Mola Begol I was put up on a swing chair by Akin. The wood stove was a Godsend as it was minus 5 that night

The next night a friend of Erfun, Akin, kindly put me up on his couch in Mola Bogaz. It was -5 so very grateful.

A million thanks to Erfun, Ufuk and Akin and families – and Turkey!

And thanks over the last weeks to so many people – to lovely Gulsum in Istanbul, Kaan at Cenk Shipping, Engin and Kadir and the welding team in Yalova, all at Eves Hostel in Bursa, Ergun, Ufuk, Ali and many others in Inegol, Akin and the friendly soldiers at Mola Bogaz, Hakan, Kubra and Khan and all their lovely family plus the Motorbike Club and schools in Bozuyuk, and Erhan, Cesil, Deniz and Esin and all the team at the fantastic Pedal Cafe in Eskisehir.

Finally, many congratulations to the ever inspiring 73-year-old Rosie Swale Pope for running all the way from Brighton to Istanbul (and soon on to Kathmandu!) all in aid of Phase Worldwide. Rosie, you are a wonder!

Hope this finds you all in goodheart, until next time – Keep On Keeping On!