Hello from the Bulgarian boonies!

Wow, what a fortnight or so. When I last wrote I was dossed down in a Serbian roadside cafe about to make a dawn border crossing into Bulgaria. Since then I’ve slalomed across Sofia and plodded through Plovdiv, bivvied in barns and horse paddocks, pitched my tent in fields, farms and campsites and stayed in a few hostels/hotels and best of all, with several lovely, trusting local families.

On the road, I’ve met, other than lots of big hearted Bulgarians, a Japanese fire fighter turned 100,000 km world cyclist; a Welsh extreme hiker and an English septagenarian endurance legend, who has run around the world once – and is now doing it again! World circumnavigators are clearly like buses, none for weeks, then three at once! For more, please read on…

So you would walk 500 miles, would you The Proclaimers, sing your socks off about this paltry distance! Pah! Try 5000, you light weights.

To be fair, I’d never have made it without you. No, not The Proclaimers, but you! Yes, you! If you’re reading this the chances are you’ve helped me reach this magical milestone.

However trivial it may have seemed to you, a wave, a smile, a glass of water (or moonshine!), a donation to the brilliant charities (whatever the amount), a bed/pew/garden/haystack for the night, a joke, a like, a laugh, a piss take, a wing, a prayer…you’ve kept me plodding on, and I can’t thank you enough.

I hit the big 5 O, O, O, within an hour of crossing the Bulgarian border. 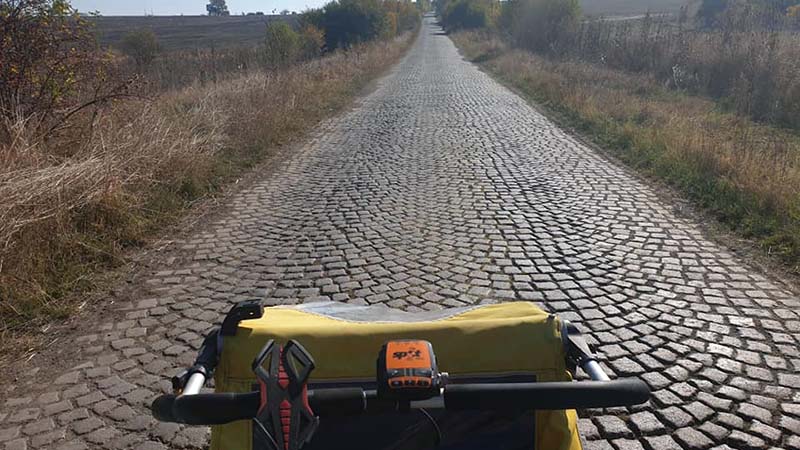 All went smoothly. After a short spell on a major but deserted road, I peeled off onto a long cobbled track. Here, I met fellow walker, Joaqim, a German teacher hiking from Dusseldorf to Sofia. 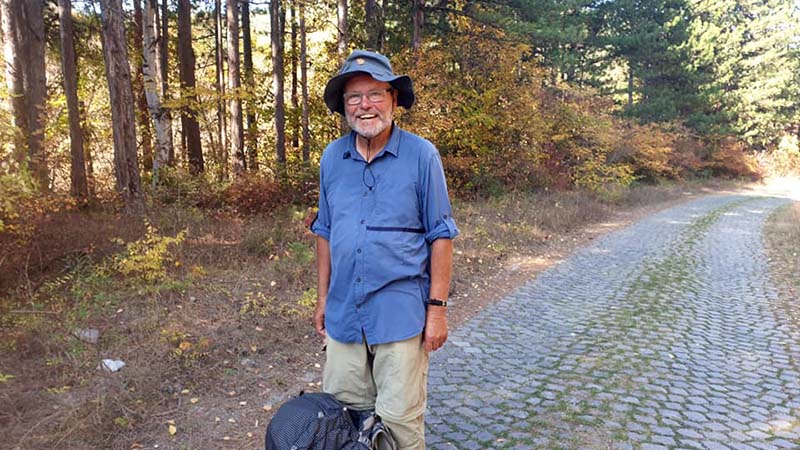 Retired teacher, Joaquin, walking from his home in Germany to Jerusalem

He fired off photos of Koko and I, as if we were strange, alien beings, gave Koko a trial push, grimaced and stated, ‘Not for me!’, then, shook my hand heartily and shot off like a spooked hare. He was jumpy but very likeable – wish we’d yarned longer.

After a 20 miler yesterday, through the chaotic Sofia suburbs I reached buzzing Mostel Hostel, unpacked Koko, and collapsed on my dorm bed, in a state of exhausted ecstacy. 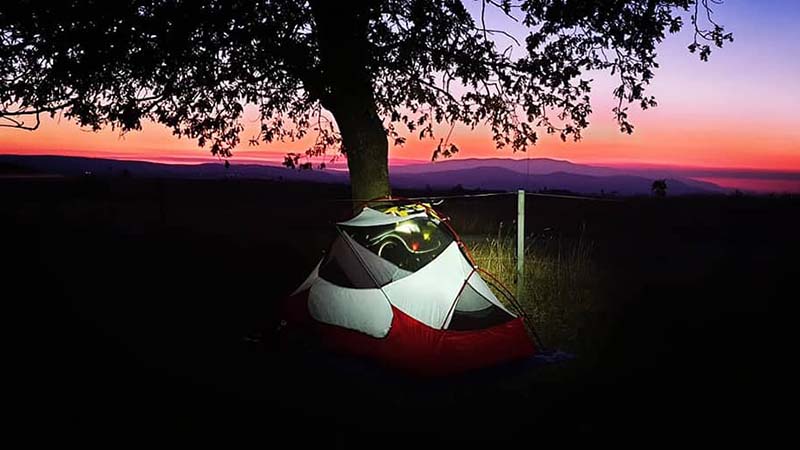 Camped under a celestial sky in the hills above Vackeral

After a reviving pitstop at Hostel Mostel in Sofia, the Bulgarian capital, I’m now back on the road, camped in the hills overlooking Vakarel.

Staying in a big city hostel is a social whirl, after a week of solo hiking.

In my dorm was a German medical student, an Albanian girl travelling for the first time, an Aussie teacher and a Bulgarian engineer…

In cities I feast, not only on food, but company, storing conversations, stories and faces, for the sometimes remote road ahead.

After so much human contact, it can feel lonely striking out again but in the village of Lozen, my first night after Sofia, where I’d began to pitch camp in the park, I was lucky to meet Roman.

Roman, who runs a tiling business, was drinking at a local cafe (run by a jolly matriarch, Nelle) with some friends, Stanislav and Grigor, both mechanics, and Ivan, a trucker.

They joked that the park was full of gangsters and that I should join them for a drink. Then Roman insisted I meet his family, who lived 10 minutes walk away.

Soon I was dining with Roman, his wife, Dafi, and daughters, Pola and Veronika, both students. I ended up sleeping the night there after a laughter filled evening.

This level of generosity, taking in a complete stranger off the street, always blows me away. 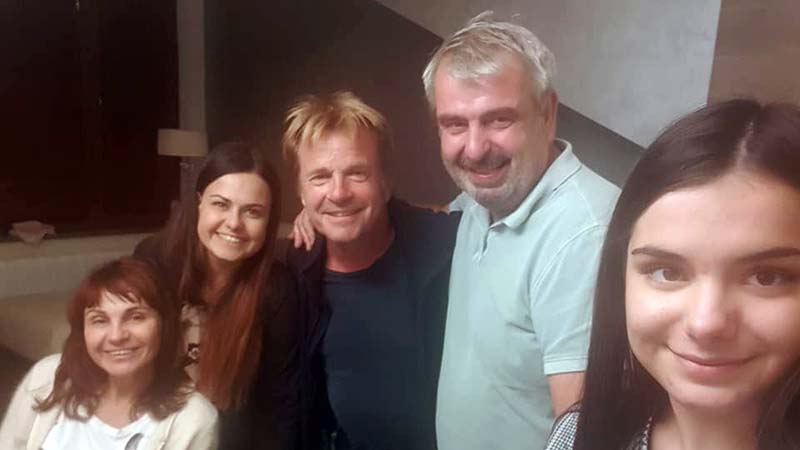 With Roman, Dafi, Pola and Veronika in Lozen, took me, a complete stranger, in for the night. Terrific family, terrific evening

What a lovely family whose kindness has stayed with me during today’s hilly hike, and now as I type this in my tent, the indigo sunset fading to a damson night.

Front axle breaks – 5
Punctures – 2 (and recently another 2 in one day!). Koko No 1, which I used across the US, the UK and Ireland had hard tyres, so punctures impossible.
Toenails lost – 4 (all re-grown, now wear shoes a size too big to combat this).
Chins lost – 2.
Marriage proposals – 1 (a Serbian lady, who was delightful, but in her 80s, very tipsy – and sitting next to her husband).
Staple food – porridge, sardines and pasta, banana sandwiches, dates, chocolate, coffee.
Most miles walked in a day – 32 ( too much, between 15 to 22 an ideal distance).
Stopped by police in US – countless times, once when they thought I was carrying a body in Koko, but, to be fair, they were always very friendly.
Stopped by police in Europe – once, in Hungary, for a selfie! And once in Bulgaria, for sleeping in a hay barn in Skobelevo. 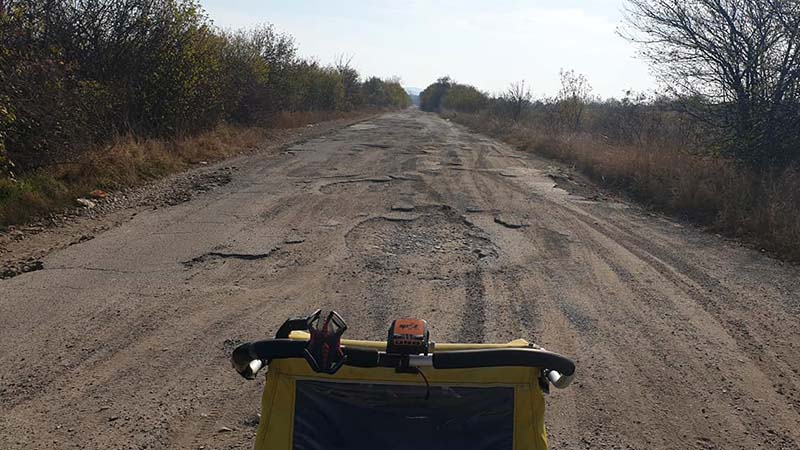 Some Bulgarian roads have more holes than Gouda cheese

Bulgarian roads often have more holes than Gouda cheese (pics), but are full of good souls (and soles – ouch!) like these orange clad road workers. 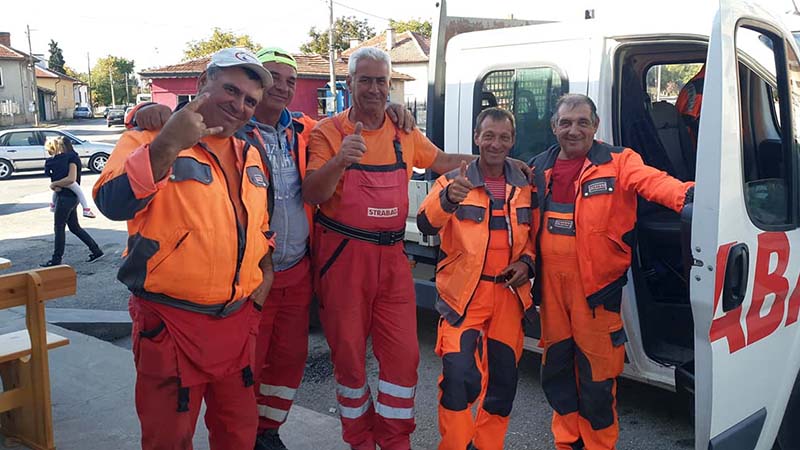 A super friendly team of road workers on the road to Plovdiv. They raced after me to give me two chocolate bars

As I walked out of Vakarel, they drove by in their van tooting and singing. Miles later I saw them again and waved as I walked by. Within less than a minute, two of them, gasping for breath, caught up and handed over two chocolate bars. I was so touched I walked back to greet the others. Diamond geezers all.

Maybe it’s the fact they work on the roads that highway workers, from Mississippi to Munich, Savannah to Sofia, are always so kind and encouraging towards travellers on foot.

Back in France, near Rouen, some flambouyant road workers ran over a busy junction to show me a cross country short cut and then, with Gallic panache, asked me to join them for a morning tipple of vin blanc. Chapeau! 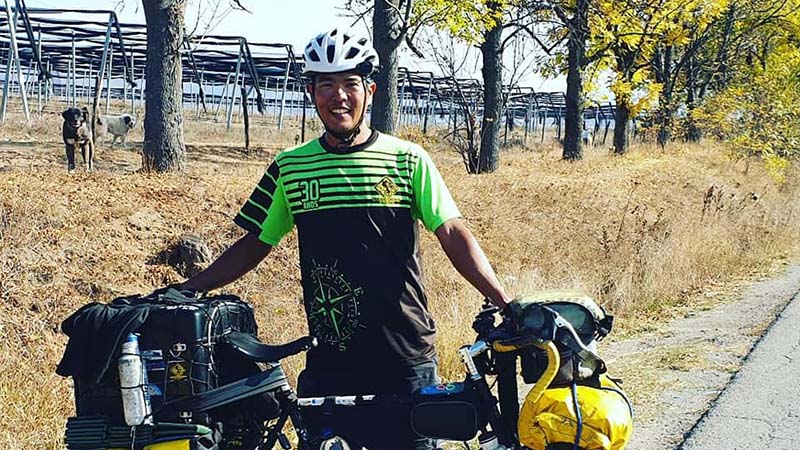 But it isn’t only road workers I’ve bumped into lately. Two days ago I crossed paths with Hamao, a Japanese fire fighter turned world cyclist, in the hills before Belovo.

Tiggerish Hamao has already covered 100,000 kilometres over 4 years, and still plans on much more before pedalling home to Tokyo, via the notoriously wild Karakoram Highway in Pakistan. When I asked Hamao why he was doing the trip, he told me: ‘I like cycling!’ Top answer. 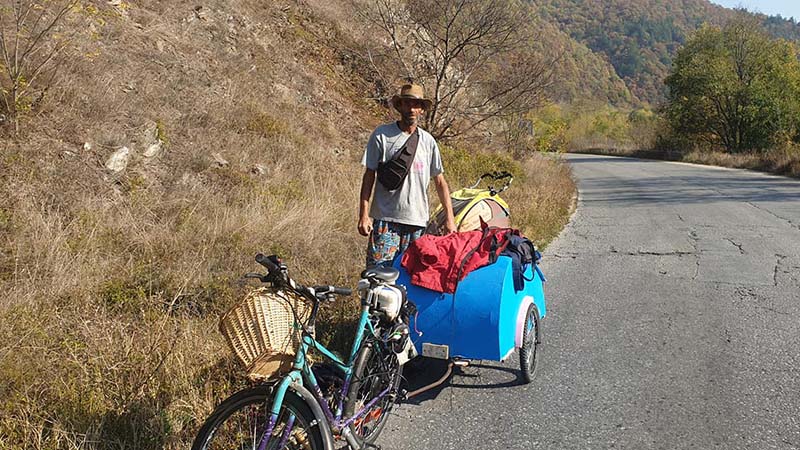 Paul, a Welsh nomad, with his ingenious self made trailer, which he sleeps in. A purist, he shuns technology, even stoves, and cooks all his food over a campfire

Hours later I met Welshman, Paul pedalling his self made plyboard buggy – an ingenious device he could pull open and sleep in – towards Italy.

Paul travels light, not even taking a stove. ‘I just light fires to cook,’ he said. He shuns tech. ‘Sod GPSs,’ he tutted, eyeing my Spot tracker. ‘I don’t want anyone knowing where I am. I want to be free.’ Respect.

Roadside bonhomie reached new heights yesterday outside Belovo, when father, son combo, George and Vlad, saw me walking towards the fields to camp. 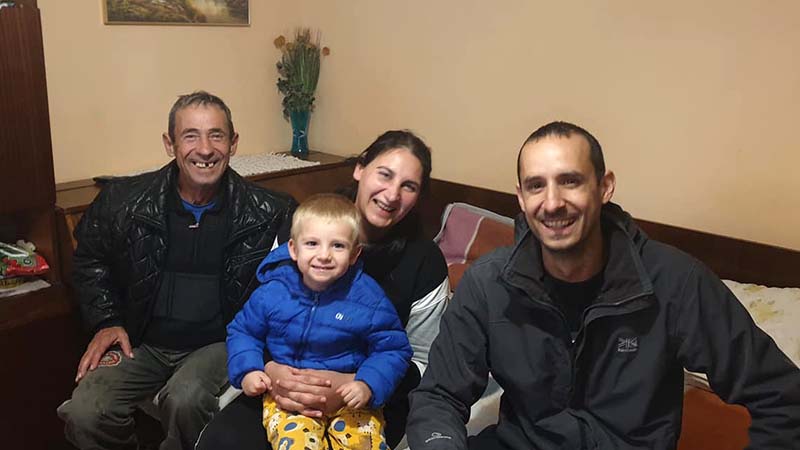 With big hearted George, Vlad, Ana and George Jnr in Belovo. They kindly let me sleep on their sofa bed

We got chatting – Vlad once picked fruit in Kent. They invited me in and let me sleep on their sofa, but not before meeting Vlad’s wife, Ana and son, George. A lovely, very trusting family. 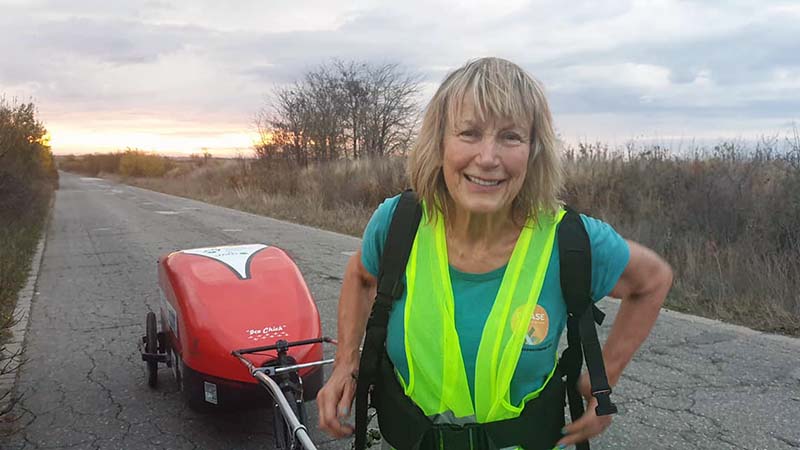 Rosie Swale Pope, world traversing legend, a force of nature and a truly lovely person. We all need to be a bit more like Rosie

Meet Rosie Swale Pope (photo), a septagenarian endurance legend, who has run round the world, sailed the Atlantic solo, ridden horses the length of Chile and raised well over a quarter of a million pounds for a range of charities.

She nearly lost limbs to frost bite in Canada, has broken countless bones, tackled Siberia in winter and gave birth to her first child at sea. She’s a grandmother and got an MBE.

But more than all this, she’s just a really good egg and a role model (or maybe road model!) of mine. If I have half her vim at 73, I’ll be thrilled. Her attitude is, stop fretting, sod regrets, and live, live, LIVE! 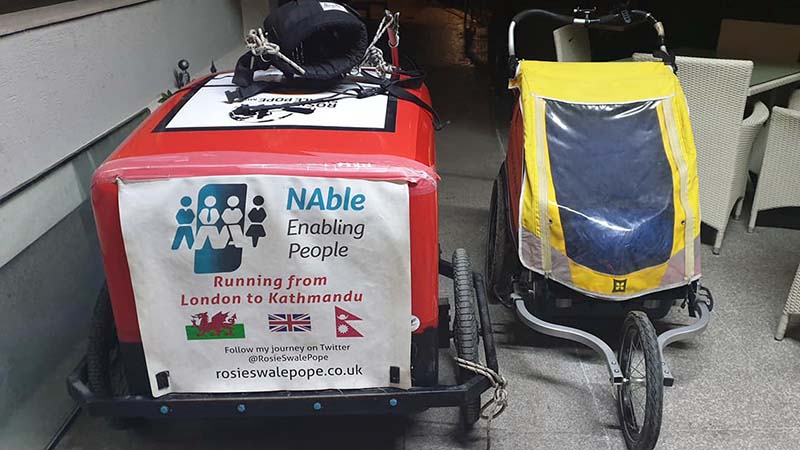 Ice Chick and Koko hanging out

I caught up with Rosie in the village of Debar where she immensely generously put us up in friendly, little Tzarandev Hotel, point blank (and infuriatingly!) refusing payment. She is currently running to Kathmandu with her trusty charriot Ice Chick, which she sleeps in most nights out in the wilds. It was a blast spending time with her, she is super hardy but a joyous person, full of courage, humility, heart and great yarns. Do give her a google and follow her progress. She makes the world a better place. 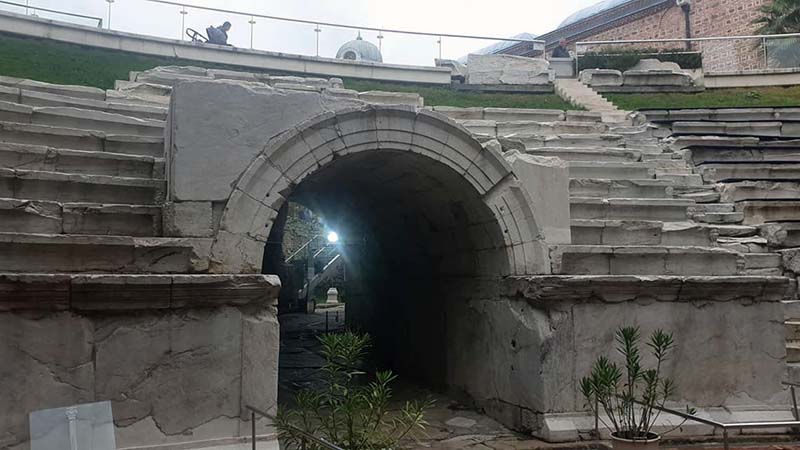 Some Roman ruins, dating back to Marcus Aurelius, in the heart of Plovdiv. 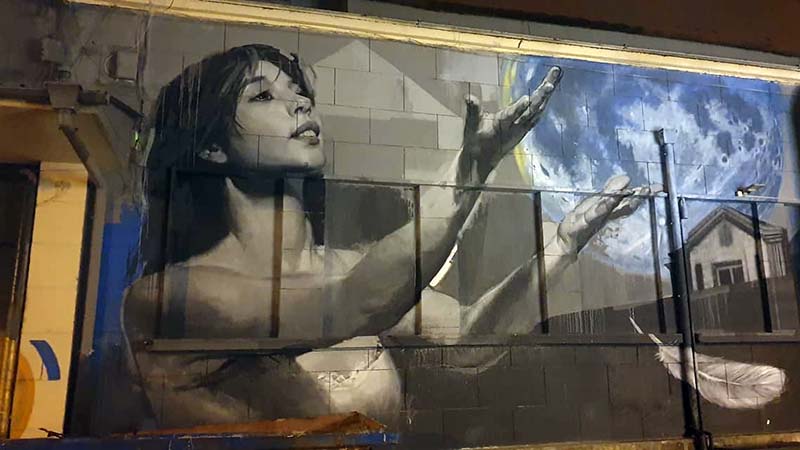 These last days I also stayed in the Pijama Hostel in Plovdiv, camped at Tapa Horse Ranch in Yogadova and tonight bedded down in a haystack in tiny Skobelevo. 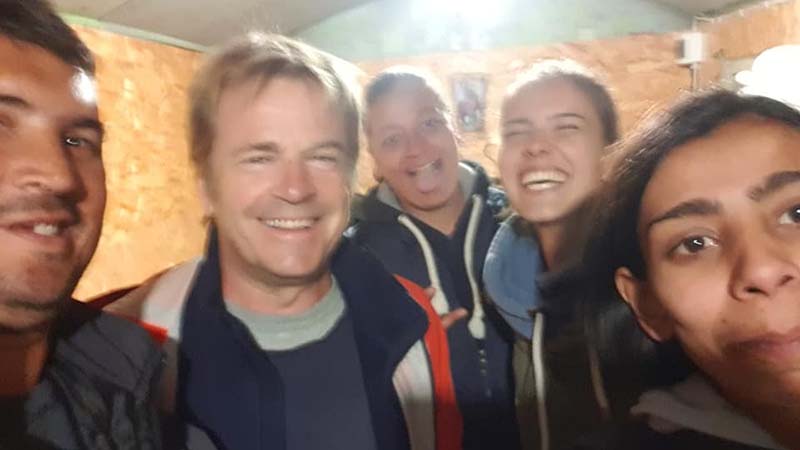 With the jolly team – Marin, Deya, Ena and Dani – who kindly let me camp at Tapa Horse Ranch

Three police just turned up shining torches in my face. I did my usual goofy, smiley Englishman schtick, but they seemed suspicious and thoroughly frisked Koko.

Finally, I showed them the short YouTube clip about the walk on my phone. That seemed to placate them and they were much jollier.

Earlier in the evening, a kind fellow called Angel, drove up and gave me apples, jam and a small bottle of Bulgarian wine, which I’m now sipping, post police search. Bliss. 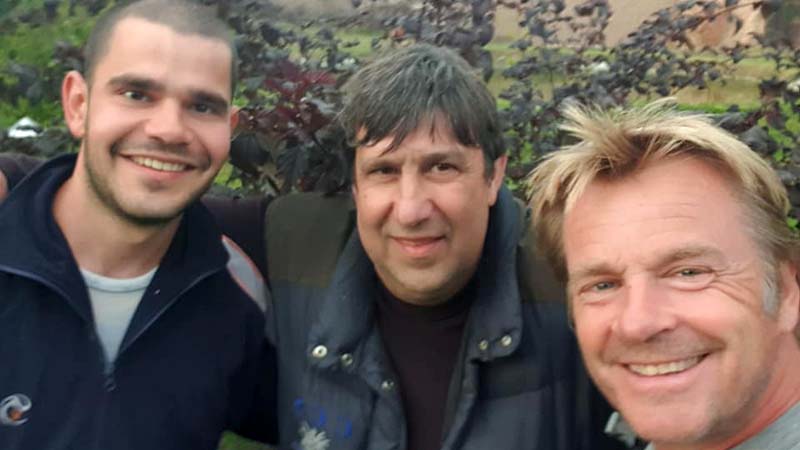 With father and son, Angel and Nickolai, near Debar, they saved the day after Koko suffered a double puncture

Thanks so much too, to son and father, Nikolai and another aptly named, Angel, who helped me out with a double puncture today – lots of thorns around here – with two new inner tubes from a local bike shop. Koko is raring to go again, as am I, having been hugely inspired by Rosie.

Thanks too to Rady and Joanna at the Sofia Biblical Society, all at Hostel Mostel in Sofia, to Roman, Dafi, Pola, Veronika in Lozen and Nelle, Stanislav, Grigor and Ivan, to George, Vlad, Ana and George Junior in Belovo, to lovely Gerry in Plovdiv, who helped me when I walked into town soaked and with no power in my phone, to Angel and his parents at Pijama Hostel, to Deya, Ena, Miran and Dani at Tapa Horse Ranch and to the splendid, unstoppable Rosie Swale Pope.

Thanks also, to Mark and Sky for letting me camp at beautiful Aleksandrovo Campground last night – despite the fact it was shut for the season – (loved the hounds Scruffy and Heppi) and it was nice to meet Lucas and his French poodle, who I nicknamed Steinbeck, and Ned at the Aleksandrovo Tombs and thanks to Angel and Eva for their kindness near Simeonovgrad.

Thanks, everyone, so much for your support over these first 5000 miles, only another 11, 500 or so to go! It really does mean the world.

Wherever you are, good luck with it all and Keep On Keeping On!