Hello all – or Dobro veče!

Some soundbites from spellbinding Serbia – including busted axles, bivvies in barns and bars, heavenly (and hostile) hostels, orchards galore (apple, plum, apricots) and some indomitable souls. Oh, and Del Boy and Rodney…

On Sunday I celebrated a year on the road by camping next to a bar by the Serb-Croat border.

Sadly, the bar was shut, derelict, but perfect cover from the rain.

The evening before I’d stayed at the Art Hostel in Apatin. Here, I met lovely Ivana who works in a gym next door, where she let me store Koko, my cart (too big for the tiny dorm). 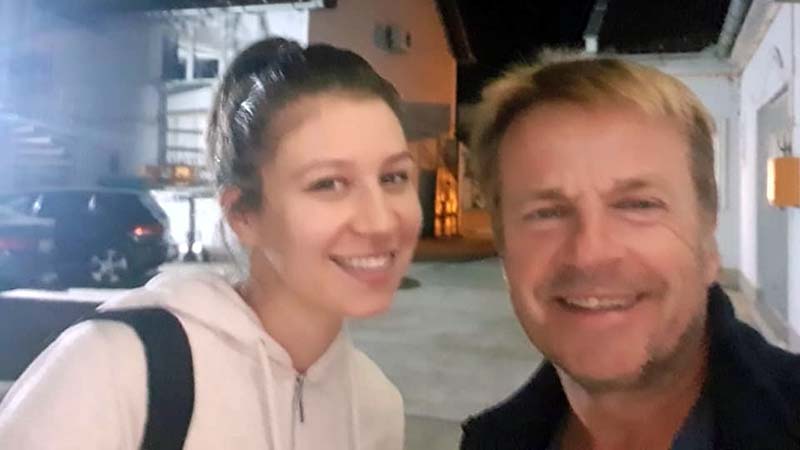 With lovely Ivana outside the Art Hostel in Apatin. Koko would not fit in the tiny dorm so she let me store her in the nearby gym where she worked

Ivana said I must meet her 88-year-old grandfather, Srdan, for an early Sunday breakfast.

It was a wonderful way to kick off my 2nd year on the road as Srdan told me about his long and fascinating life.

After a stint in the army, he was imprisoned for 3 years in 1952 (spent hammering rocks in a quarry) for speaking up against the government.

After his release he worked tirelessly at learning English, literature being his great love.

He ended up working as a translator, for a while in West Africa, translating famed Nigerian writer, Chinua Achebe.

Married four times with a tribe of grandchildren, Srdan insisted on following me out of town on his rickety bicycle. 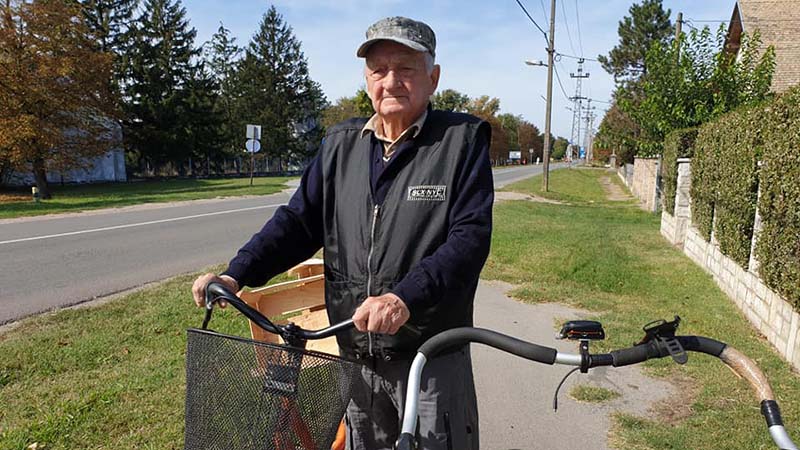 With Srdan, soldier, prisoner, scholar, translator and survivor in Apatin. So inspiring talking to him. At 88 years old he insisted on accompanying me for a couple of miles on his bicycle as I left town

He said he’d once hated the Croats during the bloody, land grappling Balkan conflict of the late 1990s, but was more sanguine now, accepting horrors on both sides.

Ivana told me, though some tensions simmer, most of her generation (she’s 27) hardly remember the war, just want to build bridges – indeed Serb tennis star, Novak Djokovic, now has Croat star, Goran Ivanisevic, as his coach.

All this reminded me of an incident on my cycle ride from UK to Oz back in 1996.

Near the French-Italian border, I met a Serbo Croat, Sergei, who had hitch-hiked from the Balkans to France to find work, after his entire family – parents, wife and baby – had been killed in a bombing raid.

I’ve never forgotten Sergei, his quiet courage. His heart smashed, yet holding himself with such dignity, and a vow to keep on even after losing everyone he loved. 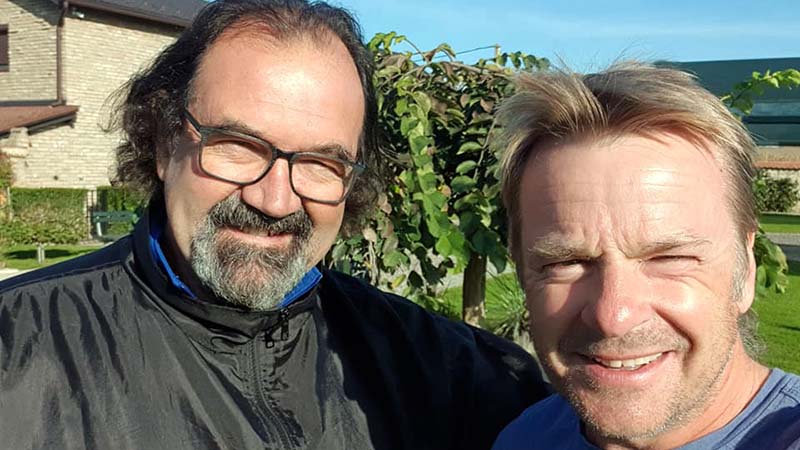 Three days ago, camping near Sombor, I met retired South African teacher, Pierre, who kindly shared his dinner – chops and butternut squash. He’s touring the world solo, his wife having died just before their dream Odyssey.

Maybe what I’ve learnt most on my walk, from Srdan, Ivana, Sergei, Pierre and many more, is the indomitability of the human spirit.

“We are, all of us, pilgrims who struggle along different paths toward the same destination.” So wrote author, pilot and philosopher, Antoine de Saint-Exupery. He has a point.

The more miles I clock on this world walk – and despite the wildly polarised politics of today – I witness so much more that unites us humans, whatever our culture, colour or creed, than what divides us. Nowhere more than here in Serbia.

My needs are simple on the road: shelter, food, drink and a bit of human kindness. But, isn’t that what, deep down, we all want?

Sure, good boots, Tiger Balm, a phone and the odd toast of Rakia (Serbian moonshine) help too.

And, of course, if necessary, I’m in the lucky position that I can hang up my socks anytime – though my stubborn heart is unlikely to do this. Mostly though, I’m loving it, the simple joy of hiking a few millimetres of map each day.

Yes, all of us have different maps, different contours and terrain, navigating myriad paths, but, at its most fundamental, we are all heading the same way.

We are all of us Hamlet holding up a skull and knowing one day we will be ‘poor Yorrick’. Our journeys are all short, at times dark, at times soul fizzingly wondrous.

This is the human condition and, though we struggle to, surely we should all love each other because of it and love our fleeting, ‘mixed up, muddled up, shook up world,’ as The Kinks so poetically put it.

(Ok, rein in on the existential musings, Freo, your tired brain will over cook!)

I’ve really savoured my walk the last days, meandering down the Danube for perhaps the last time. 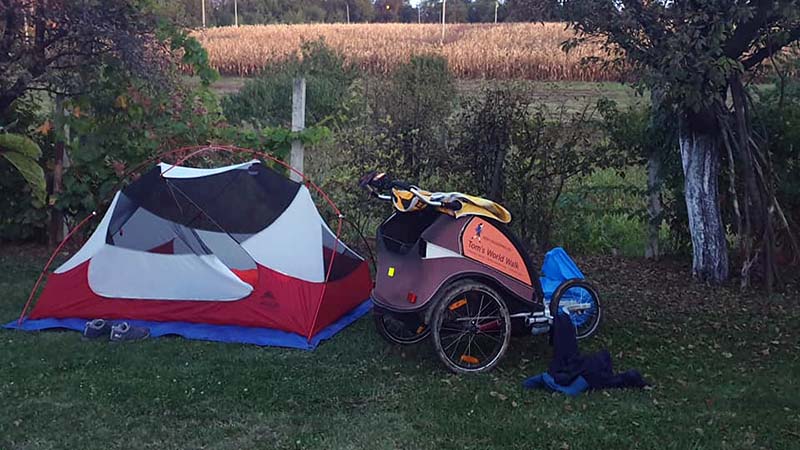 Amidst the apple trees at the gorgeous, remote My Memento Campsite

After a glorious camp at My Memento, Beska amidst apple and plum orchards, and a night by the river’s edge near Surduk, I’m now within 20 miles of Belgrade, the Serbian capital.

Here, I must decide whether to hike east down the Danube to the iconic Iron Gates in Romania, or to walk on south through the hills to Bulgaria. Both paths finally lead to Istanbul: local advice will put me right.

For now, I’m just enjoying Serbia and its fine people, even if all the Rakia toasts are slowing me down a bit! 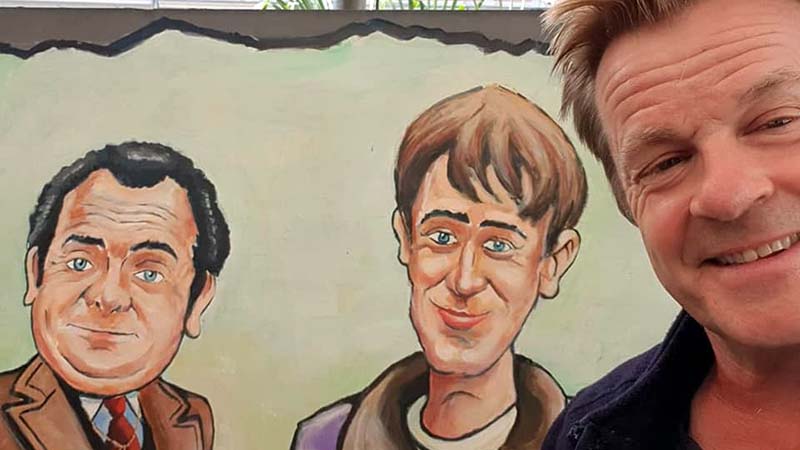 Lovely jubbly! Only Fools and Horses is one of the most watched shows and there’s even themed cafes like this one in Novi Sad

Would you Adam and Eve it! Del Boy and Rodney are household names in Serbia!

Only Fools and Horses is such a hit that Peckham’s finest even have themed cafes. It’s by far the country’s most popular foreign TV show, known as Muche, meaning Shady Business.

Serbs light up at the mention of Del, Rodders, Uncle Albert and Trigger, relating to the humour, the banter, the juggling to make ends meet. They’ve even picked up phrases like: ‘You plonker!’

I felt a right plonker turning up in Belgrade, Serbia’s capital, zonked after a 20 miler. When I rang the bell at Home Sweet Home Hostel, it was answered by a surly fellow, who took one look at Koko, my buggy, and stated: ‘No children here!’.

When I explained Koko was baby free, he still wouldn’t budge.

‘That!’ he pointed at Koko. ‘Is not coming in here.’ Home Sweet Home…hmmm, not so sure.

Then I tried nearby M Hostel. The glacial receptionist blew up a cloud of blue ciggy smoke and barked: ‘Full!’. The M might well stand for Miserable Git.

Feeling downcast, I spotted a sign for 3B Hostel and wobbled over.

Here, I was met by a hulking chap, Darko, all smiles, and with another jolly guest, Sevvy, they helped me wrestle Koko up the stairs. 3B is a new hostel, cosy, cheap (£7) and super friendly. The lovely owner, Ivona, even bought pastries in the morning. 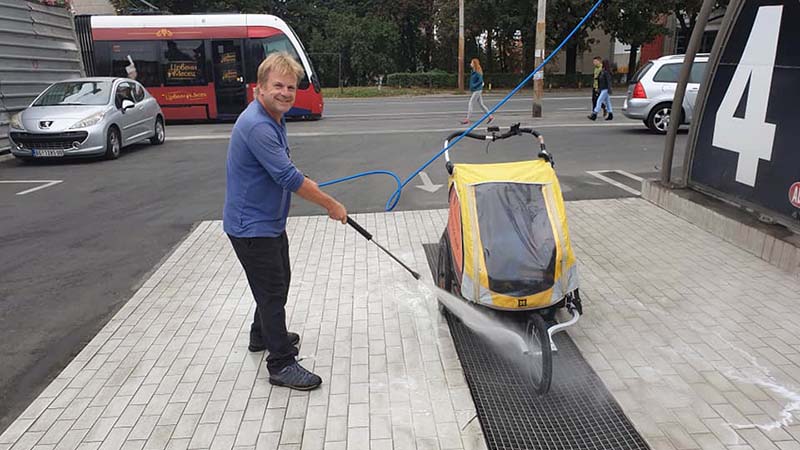 (Quick update. Nikola, the welder, and the Pro Bike team have worked their magic! Koko is match fit and we are back on the road…) 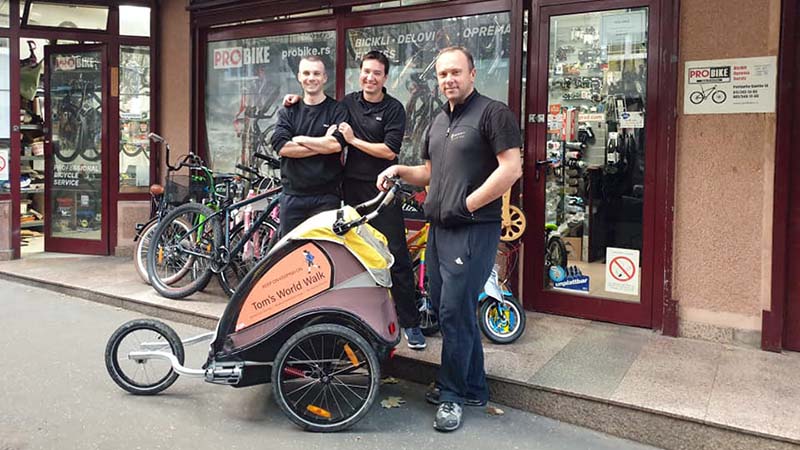 Locals have been amazing – Ivona, Sevvy, Darko and all at 3B and Fair and Square Hostels, the team at Pro Bike and their welder mate, Nikola – stars all.

Big thanks this last stretch to great mates, Patrick and Sarah Westropp, for their generous donation to Medical Detection Dogs and to so many Serbs especially Boris, Marko and all the Etno Group in Novi Sad and Vrbas, to Miki, Sanja and Dragi at the Sova Hostel, to Ivana and Srdan in Apatin, to Pierre and the lovely folks at the campsite in Sombor, Nenard, Mono and Anna at the Urban Cowboy Ranch in Grocka (your hay loft was better than any hotel!), to Ivona, Sevvy and Darko at the 3B Hostel in Belgrade and to generous Spaniard, Lucas, to Jelena at Kambodza Cafe in Smederevo and to the brilliant (and bonkers) Nikola, the welder, and Boban, Milan and Vlad at Pro Bikes in Belgrade – you are the best. Finally, to Neil ‘Studge’ Rees for his endless and wonderful list of Eastern European contacts.

Thanks so much for reading. Until next time…Keep on Keeping On