Howdy from the little mountain town of Payson, in what Arizona locals call Rim Country.

Quite a week on the road including the first 500 miles done and dusted. Whoop, whoop! Terrain has shifted wildly from desert, to suburban Phoenix and now into the mountains. Also met some great characters along the way. 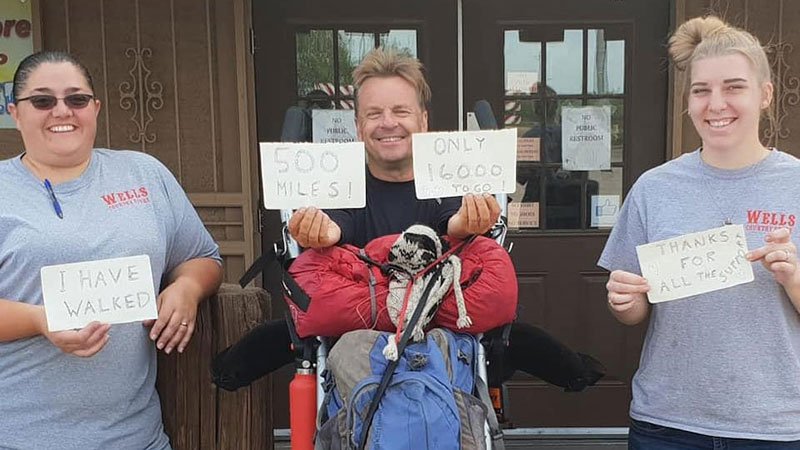 500 miles clocked! Yeeha! Still 16,000 to go but at least I can now sing that Proclaimers song with real gusto.

I hit my 500th mile almost exactly at Wells County Store in the tiny village of Wittman, so Teresa and Audrey, who work there, kindly helped celebrate and held up the signs in the photo (sorry, they are just ripped pages from my journal, so not very clear).

The distance of this walk is so overwhelming at times; it is important to take each day, each mile, each step, as a little victory, inching towards a much bigger equation.

Distance is measured in so many different ways. Sailors have their own methods, as do desert Bedouin. Some Inuit measure distance by the number of ‘sinik’ or sleeps a journey takes. I’m wondering whether I should use how long it takes all my toenails to turn black..

All I can say is that I feel hugely privileged to make this long walk – so, so lucky. Yes, at times it takes me to the edge, howling at the moon, tired and vexed, as it should, but for the most part it’s a blast, and I wouldn’t want to be doing anything else.

Thanks so much to everyone at home and on the road for all your support and generosity. It means the World and is what keeps me yomping on – as does drumming up funds for three exceptional causes: The Alzheimers Society, The Puzzle Centre and Medical Detection Dogs.

After so long in the desert, I’m now not far from the sprawling city of Phoenix, then will strike out for the mountains leading to New Mexico.

Well, you all warned me walking across America with an overloaded shopping cart would finish me off. This photo proves it! Happy Halloween everyone!

Never really understood this festival of spooks but it is huge here: all across Phoenix it’s like one big fancy dress party.

Witches and wizards; Batmen, Borats and Bogeymen; clowns and clergy; princesses and phantoms.

In gardens across the suburbs there are skeletons, spiders’ webs and pumpkins a plenty, often filling up coffins.

It’s all very strange, and rather wonderful as everyone seems to be enjoying it so much.

The fact Halloween falls very near to The Day of the Dead in Mexico has created a kind of fusion of the two. Mexico has exported its decorated skulls and America has in turn supplied Batman and Wonder Woman.

I love the Day of the Dead, partly because it is a day to celebrate and remember any dead relatives and friends, surely a healthy ritual, but also because it is so joyously weird with its skull necklaces and dancing skeletons: it somehow respects death, while laughing at it at the same time. It’s surely a much healthier way of confronting our inevitable demise than sweeping it under the carpet.

The Welsh poet, Dylan Thomas, wrote: “Do not go gentle into that good night” and this is what The Day of the Dead seems to tell us, we don’t have long, so live, live, live!

Other than taking photos of skeletons, I walked through miles of Phoenix suburbs today, mostly plain sailing, except near Scottsdale when the bike lane I was yomping along petered out and I was forced to walk for a good mile or more along a gravelled, cacti strewn mid section between two busy carriageways.

Exciting while it lasted but bushed now. Night night. 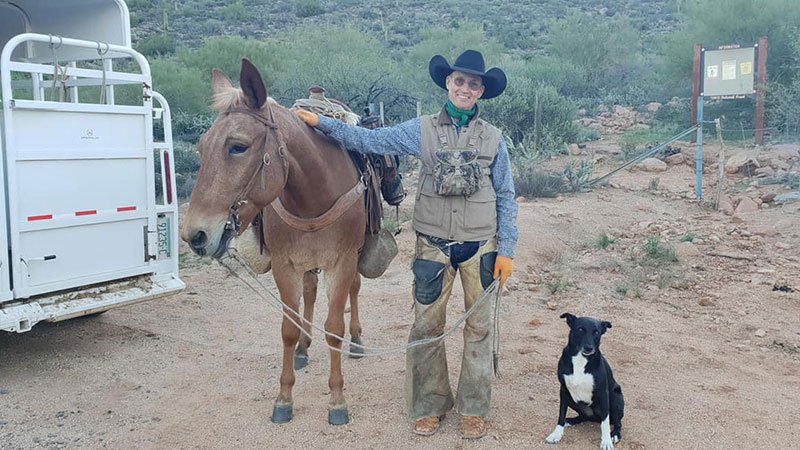 After walking 22 miles out of Phoenix yesterday, I camped alone in the Tonto National Forest.

Highway 87 was busier than expected but once off it and tented up in the bush, I felt like the last person on earth.

That is, until this morning, when I heard the spirited braying of a mule, a noise I remember well from my travels with Browny, back in 2002.

Then appeared Jeffrey, fully chapped up with his mule, James Bond, and his dog, Rooster. Plus rifle, binoculars and a big hat. A wonderful vision from a world I thought had vanished.

Jeffrey was off to check on his zebu cattle – hardy, African livestock that can thrive in scrubland – then planned to take part in a local rodeo. He competes at lassooing with his teenage son, who helps him run the ranch.

Jeffrey gave me some water and muesli bars. Later he drove by as I was walking into the three house town of Sunflower and handed me some chilled, tinned peaches, which, on a hot, shade free day, are like manna from heaven.

Old school decency at its best.

Jeffrey also told me that in Rye, twenty odd miles further into the mountains, there was a new BBQ joint. Rye looked like a ghost town on the map, but now is starting to pick up. I was thrilled to hear this and strode off dreaming of hickory ribs.

It’s been a helluva day walking to Rye, but well worth it as I am now happy as Larry, stuffed to the gills, and camped out in the Gila Hogs restaurant garden. Thanks Anthony, Hayley and the gang.

And, thank you Jeffrey Wilms, surely one of the last, true cowboys left in Arizona, indeed the entire West. An honour to meet you, Sir, not forgetting James Bond (‘he’s a little Thunderball’) and Rooster.

‘I moved here aged two’ said Jeffrey. ‘Just about local now. This is wild, beautiful country. It’s where I want to spend my days, along with the mules and coyotes.”

Walking through it, I can see why, the land boasts a rough hewn, cacti peppered, big horizoned splendour. I’m so lucky to be here.

Thank you for reading and special thanks to Nick and Sally Moldan, Lucy and Nick Dawes and to Julia and Guy Thomas-Everard for all being stars and making donations to the wonderful charities – The Alzheimer’s Society, The Puzzle Centre and Medical Detection Dogs.

Such a boost to know the more miles walked, the more the donations are slowly rising for these splendid causes.

Cheers for now and see y’all somewhere down the road…