Hello, hello! A cherrypick of some highlights from the latest Austrian stage of the world walk, much of it hiking alongside the legendary Danube, which passes through 10 countries, more than any other river in the world.

Sorry, very behind on FB so I haven’t posted every stage – communal sigh of relief! – but all posts available on Instagram (Tom Fremantle) or the website if interested.

It’s been quite an adventure these last weeks, with some major milestones hit, and a jolly, morale boosting visit from my daughter, Eliza.

Needed shelter from the storm the last couple of nights and Austria has not let me down.

Yesterday at dusk I turned up soggy and shattered at Heikerdinger Bar in tiny Timelkam to ask if I could camp out back.

The Heikerdinger Bar – my favourite name of the week apart from Pfaffing and Am Anger – was pure 1970s.

Everyone smoked and brandished tureens of ale, a calendar of scantily clad models hung at the bar and Rod Stewart sang Maggie May. I braced myself. 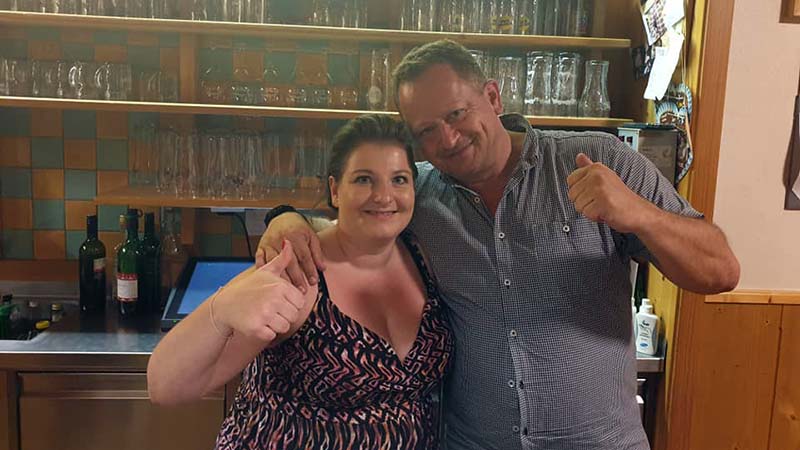 Michela and Horst, two of the kindest people I have met on my travels who pulled out all the stops to find me shelter from the storm

How wrong was I to feel wary! From the off, lovely barmaid Michela and regular punter, Horst helped me find shelter for Koko. Michela then brought me a hearty bowl of stew and a shandy, all paid for, despite my protests, by Horst, who had seen me pushing Koko earlier in the day.

As it was stormy, big hearted Horst urged me not to camp, and said he would take me to his friend’s nearby Pension, where I could stay for free. Again, I protested, but Horst was not for turning.

‘Don’t even think about it,’ he ordered. ‘I love England, so I help you. I once saw Celine Dion play in Hyde Park. The best! The people in London, the friendliest!”

I joked that it was the first time I’d heard Londoners called the ‘friendliest’ – or Celine Dion the ‘best’.

‘Well, they are!’ insisted beer flushed Horst, gamely singing the Titanic theme tune to demonstrate. Horst and Michela were complete stars, two of the kindest people I’ve met on my travels. Danke! 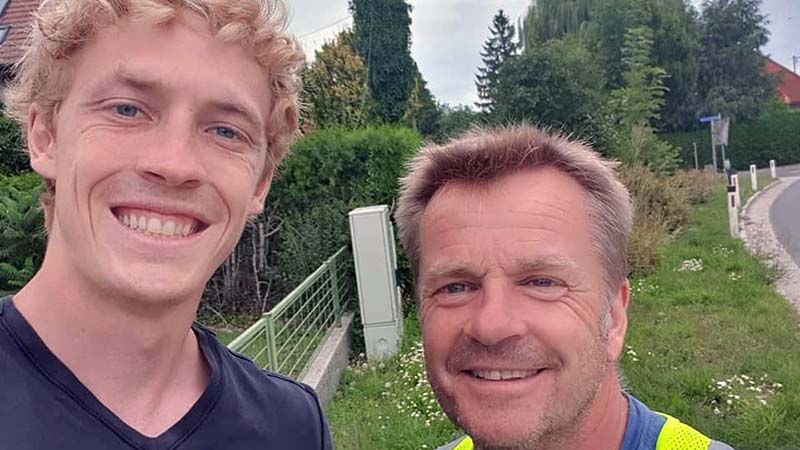 With Ryan Shirley, an American Youtube filmer, who tracked me down in the Austrian boondocks

Today, a YouTube film maker, Ryan Shirley, tracked me down. Ryan is used to filming high octane stuff – cliff diving, car jumping – so an old geezer pushing a baby cart must have been a bit of a come down! A terrific fellow, Ryan, and an ace with a drone, which buzzed over head like a demented, genetically modified hornet.

Tonight, I got soaked when I reached Camping Tirolerhof. The owners have sweetly let me doss down in a hunting bothy so I brewed coffee and happily troughed a banana sandwich. Now ready to sleep, surrounded by a spooky menagerie of stuffed beasts. Sweet dreams… 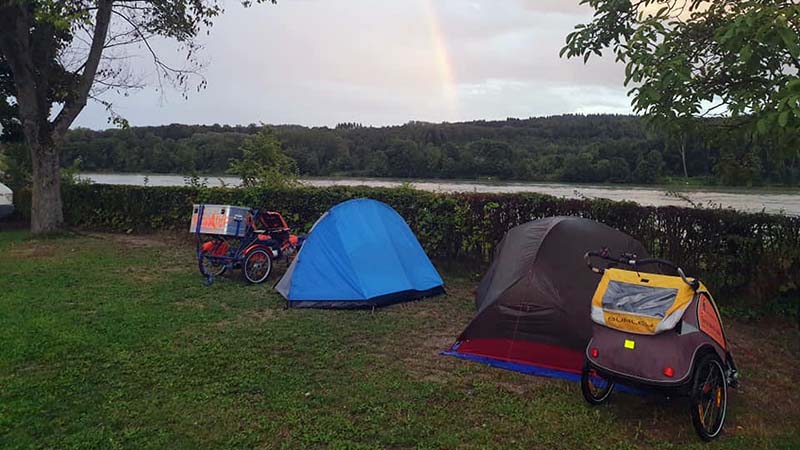 Rainbow over the Danube, a soggy but scenic camping spot

Rainbow over the Danube.

Dolly Parton said: ‘If you want a rainbow, you gotta put up with the rain’, or something sassy like that.

Well, the rain certainly drenched Koko and my camping gear but I was able to dry everything out the next night at Melk Youth Hostel. 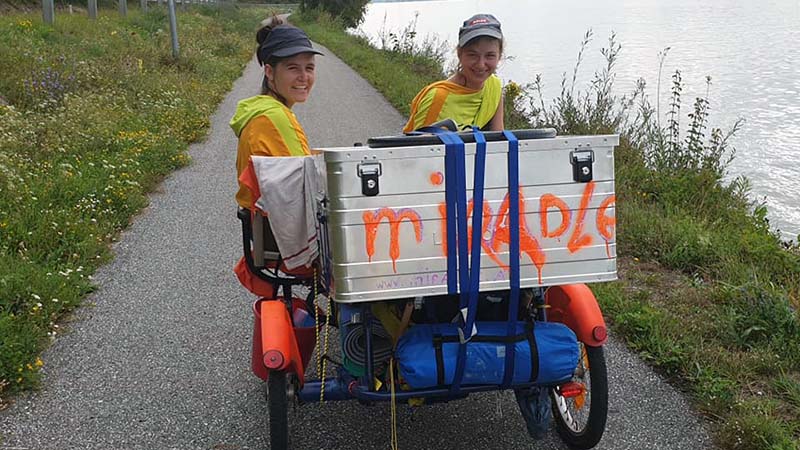 Leah and Michela, art students from Vienna, who I camped next to at Marbach, and who are pedalling up the Danube

Camping by me on the Danube were Leah and Michela, art students from Vienna, pedalling around on a side by side tandem – which looked like Koko’s eccentric cousin – and giving free art workshops to whoever wanted them.

‘We want to spark people’s creativity,’ said Leah. ‘Kids love splashing paint around. Adults are more nervous but shouldn’t be. Art is for everyone’.

It reminded me of a lovely quote by the Swiss artist, Paul Klee, who said drawing should not be scary, as it is ‘simply taking a line for a walk’. (I feel the same about writing, ‘simply taking words for a walk’, although often a tearaway spaniel in my case!)

I loved that Leah and Michela were volunteering their time like this. With their country’s politics in chaos they wanted to do something positive and community spirited.

You can understand why. Austria’s entire coalition government recently resigned – all of them! – over a video allegedly showing the ex Vice Chancellor offering state assets to a Russian oligarch. A spanking new caretaker cabinet is now in place until September. 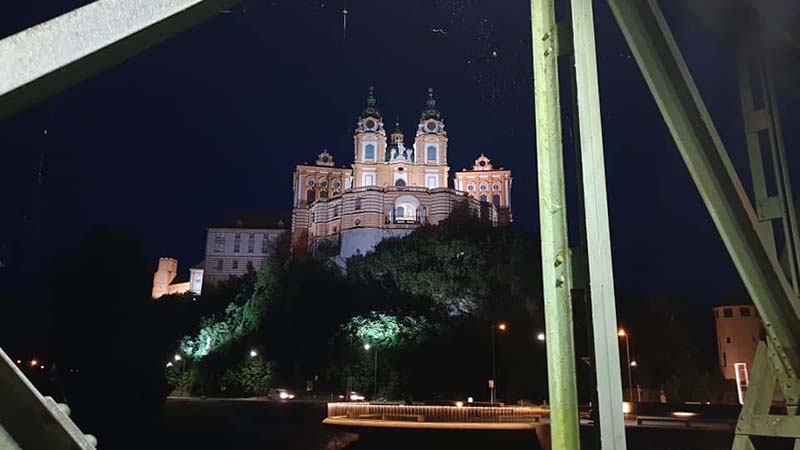 The last couple of soggy but splendid walking days I witnessed the show stopping 1000 year old Melk Abbey perched regally on an outcrop above the town.

Generations of monks have inhabited it since it was built in the 11th century.

The abbey is home to the tomb of Ireland-born, St Colomon, who is now a patron saint of Austria (where he was mistakenly hanged as a spy). He is the eclectic saint of hanged people, horses, gout sufferers and horned cattle. I hope unhorned cattle have a saint too (Saint Poll maybe, ouch!). 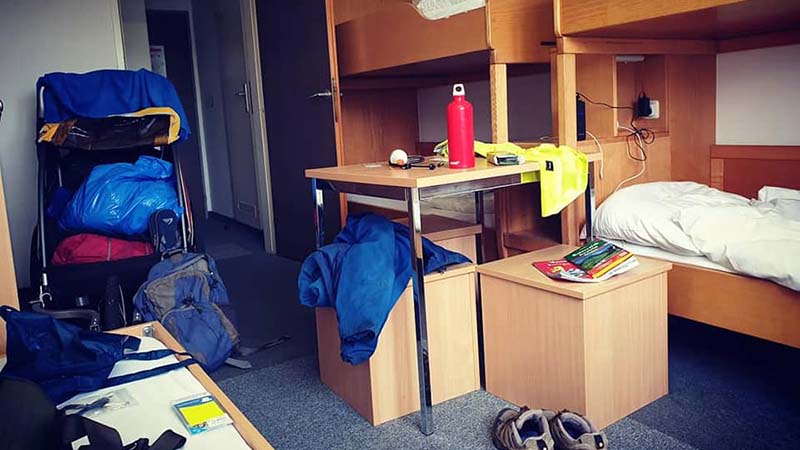 Love it when you have a Youth Hostel dorm to yourself. A chance to give Koko a thorough spruce up and MOT

After a hilly 16 miler today I’ve reached St Polten where the youth hostel is right above a police station. I’ve the whole place to myself, kitchen and all. Magic! Sardine pasta a go go!

A wonderful wild camp near Pressbaum. Sweeping view of a meadow strewn with wild flowers and a fringing wood thrumming with insects. 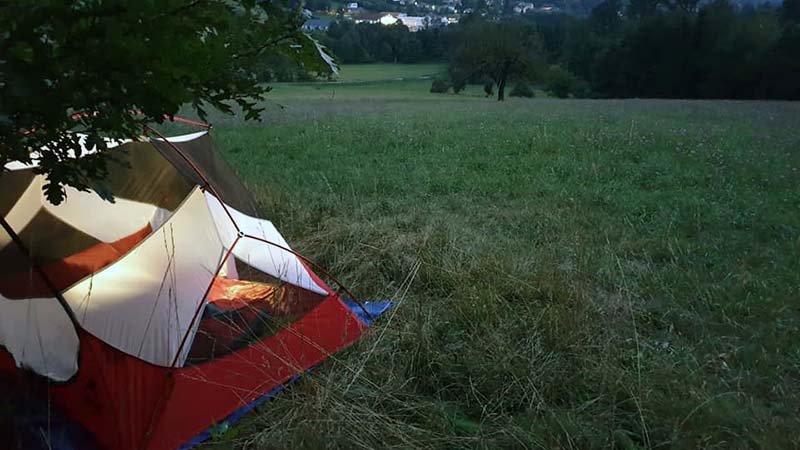 I always forget how loud woods can be: the chirrup of crickets and hoot of owls, the creak of branches and rustle of nocturnal beasts.

At first, I’m a bit jumpy, but after a while the sylvan orchestra becomes more familiar, then soothing, a lullaby from within the leafy murk. I’m happy to be outdoors, to smell the earth.

At times the surrounding nature feels so grand, ageless and horizon-free that I wonder if I’ll have to walk forever. Other times I’ll chew up the miles with ease and see the world as smaller, more fragile and transient (especially when hearing that the Amazon rainforest, supplying a fifth of humanity’s oxygen, is ablaze).

After an 18 miler yesterday I’ve now reached the outskirts of Vienna. No insect choirs or hooting owls here, just the distant whoosh of traffic. 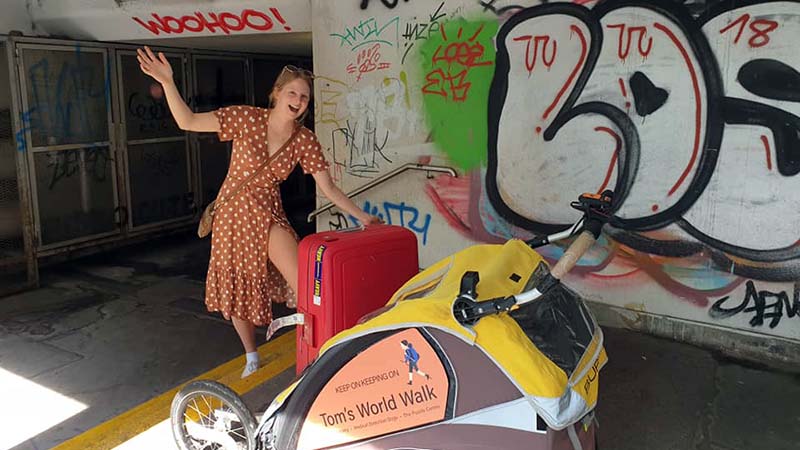 Before starting a semester for her chemistry degree in Finland today – proud dad! – Eliza joined me for a weekend in Vienna.

I’ve just waved her off and will now resume walking east.

We created more chaos than usual: hauling Koko, my hiking trailer, and Eliza’s monster of a red suitcase, through graffitti strewn subways to our hostel; hiring bikes and cycling down cobbled Viennese side streets; eating everything in sight (mostly schnitzels) and admiring Hapsburg palaces and local artist, Gustav Klimt’s bewitching masterpiece, The Kiss. 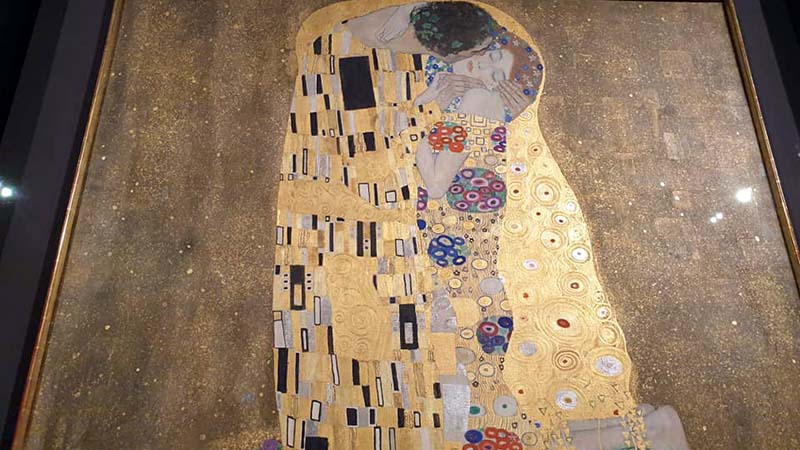 Perhaps the highlight was attending a classical music concert on our bikes – Eliza in a red dress, me in a Millets shirt. Not something either of us do much – make that ever! – but hey, we are in Austria, home of Mozart and Strauss.

We scored cheap tickets when the tout, something of a wag, presented Eliza with a discount student ticket and me with an OAP one. With a wink, he said, no one will know. I bristled at having Senior Citizen (in German) blazed on my pass but Eliza and the tout thought it hilarious.

Anyone of my age (teen of the 80s) will remember with affection Ultravox’s classic (and slightly naff) song, Vienna, with the immortal line: ‘This means nothing to me…Ohhhh, Vienna.’

Well, Midge Ure and band, I beg to differ. Vienna has meant a great deal to me. 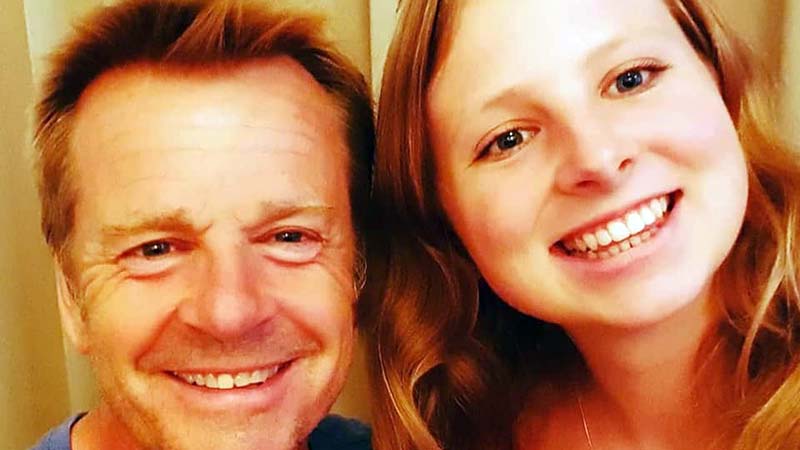 With Eliza, who may be 20 now, and far taller than her dad, but I still often call her Pops, her childhood name

I’ve had an unforgettable weekend with my little girl (yes, I know she’s a foot taller than me, sans heels), celebrated over 4250 walking miles and, thanks to everyone’s generosity, the amount raised between the three charities – see below – has now topped £10,000, a third of the total target, so a major milestone.

Big thanks to all of you who have donated, it means so much to the wonderful teams at each of the charities, and really inspires me to keep on keeping on, too.

Have a cracking week.

Many thanks to Gary in Tittmoning, Ernst and Elisabeth Piech in Mattsee and all at fahr(T)raum, to Caroline, Tom, Malin and all the lovely team at Au Camping – and Rosie Swale Pope and Tony Mangan for inspiration, to Michela and Horst, Leah and Michela in Marbach Camping all at the YHA in Melk and Marlena and Souda at St Polten, to Sam at Abai Hostel and all at Vienna Hostel Ruthensteiner, not forgetting Eliza, for being the very best of company.

Many congratulations to my great (mad) friend, David Fox-Pitt, and his friend Neil, who have just completed an astonishing charity pennyfarthing ride from Lands End to JOG. Legends.

As explained in the posts, several milestones have been hit this stretch, so thanks so much for your support, whether you have donated to the charities, put me up, offered advice, spurred me on, it’s all much appreciated.

Until next time, cheers all and keep on keeping on… 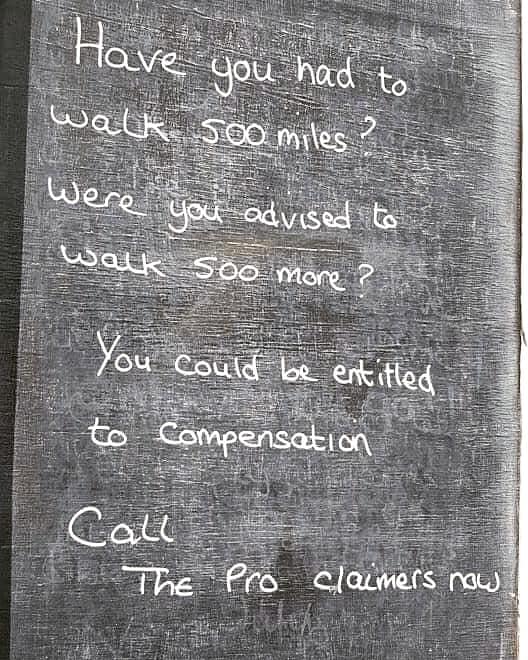 Well, it made me laugh