Hope you all had a cracking weekend. I completely missed all the cricket, tennis, F1, but it was clearly a humdinger! Bravo!

That said, I did by chance, catch a tiny glimpse of the Tour de Francers while on the road (more later).

France nearly done. Now a stone’s throw from the German border in Strasbourg, after clocking up 46 miles over the weekend along country roads and a canal path.

Now staying at a wacky place called Ciarus Hostel, a cross between a Youth Hostel and Butlins, the 25 Euro, 4 bed dorm, is the swankiest hostel so far, even if the chap in the neighbouring bed snores like a rhino. Koko is too big to fit in the dorm, so she’s downstairs with the her two wheeled friends in the garage.

Weather has cooled considerably – it even rained on the tent the other night. Hurrah. Never have I enjoyed drizzle so much. Having been toasted to a gammon pink walking all day, it’s as if my hot, fizzy blood has now been cooled by a garden sprinkler.

Well, disaster was bound to strike sometime but you’ve got to keep smiling, even when you look like a camp, sweaty pirate in a high viz and wonky shades!

Striding out of Epernay, the front axle of my hiking buggy, Koko, snapped in two. To be fair, she has been under a lot of duress, off roading much of the time, and her front section is clearly her Achilles Wheel (ouch!).

I pushed her back into town, on two, rather than three wheels. This is Tour de France country, so I was hoping a local bike shop might have a spare axle.

The first shop I tried was run by an imperious woman who looked like she’d put on her lipstick during a mild earth tremor. She eyed up Koko and I with withering disdain, then blew a plume of Gauloises smoke our way.

When I tried to explain the problem in tragically inept French she shook her head, wagged her finger and said one word, loud and clear: ‘Non!’

With Olivier Medde at Dynamik bike shop in Epernay. A complete star, who kindly rummaged around to find Koko a new axle, and saved the day

Luckily another bike shop, Dynamik, a few blocks away, couldn’t have been more helpful. The owner, Olivier, squirrelled around in his workshop and triumphantly pulled out an identical axle. He refused payment. Merci Oliver, you are the French version of a diamond geezer!

Spent another night in Camping Epernay and met fellow Brit campers, Darren, Teresa and their rescue dog, Teide. Darren served 14 years in the army and Teide has been instrumental in helping him deal with Post Traumatic Stress after nine tours in Northern Ireland.

Darren and Teresa are keen Tour de France fans and kindly gave me a Tour T-shirt in case the Peloton zings by anywhere on the walk. It was great to yarn with them.

The walking has been bliss. No cars, hardly any people and nature galore including lurid green crickets, red squirrels and black, multi winged dragonflies that fly vertically up like a helicopter.

Now heading east towards Nancy, where I might even see the Tour de France cyclists. Well, if they can keep up. Happy July 4th US friends!

Koko and I walked in the woods a lot en route to Nancy, where the Tour de France zooms through tomorrow.

We finally made it to Camping Le Brabois on the fringe of town after wrestling our way down a gorgeous but gnarly forest trail.

Camping at the lovely Le Brabois outside Nancy

The last few days have been an attack on the senses. On the road, ranks of Yellow Jersey wannabes swished by, their movements as synched as a shoal of fish, every turn and jink in tune.

Seagulls mewed along the River Marne, following tug-like boats that munched up the stinky algae. While in the villages, the heady scent of lavender blends with the ripe harvesty pongs of freshly cut grass and grain.

In the woods birds are in song, whether the finches and sparrows at dawn or the pigeons and jackdaws at dusk. I’m so lucky to be outdoors so much.

I’ve clocked up some solid 20 mile walking days, while toasting gently in the heat, but nothing like the 200km days the Tour de Francers will cope with.

I have to admit, all the doping scandals and foul play that have tarnished the Tour over previous years had put me off it, especially that brazen bully, Lance Armstrong, who still hasn’t properly apologised for his rampant drug flouting.

That said, I was intrigued to hear that the Tour, perhaps the most arduous of all sporting events (3,500 hill strewn kms over 21 cycling days), has always been controversial.

In its opening year, 1903, the race was won by Frenchman, Maurice Garin.

Known as the ‘Little Chimney Sweep’ Garin often chain smoked while riding and barged other cyclists out of his way.

But he wasn’t the only bad boy. In the early Tours incidents of nails being thrown on the road to puncture opponents’ tyres, lemonade being spiked and serious heckling, all occured.

Talking to Tour fans (who are now swarming the area) it’s good to learn the drugs crackdown has really cleaned things up – they are confident the Tour’s more noble qualities, of which there are many, will resurface.

On our walk tomorrow, Koko and I hope to cheer on some of the lycra lads as they zip by. Allez, allez! 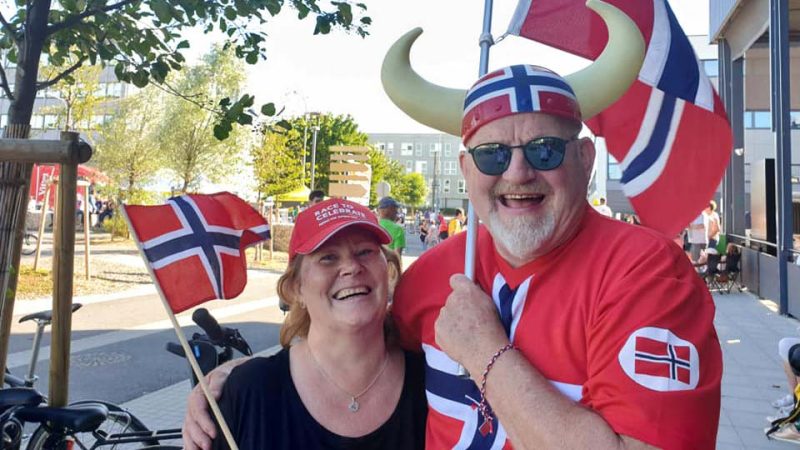 Vikings in town! Per and Marit cheering on the 6 (yes 6!) Norwegians cyclists on Stage 4 of the Tour de France

Meet larger than life, Per, and his lovely wife, Marit, from Norway, who were staying in the same campsite and who I later bumped into at the Tour finishing line in Nancy town centre.

‘Is there a Viking Convention here too?’ I asked. ‘Norwegians don’t cycle do they?’.

‘You are joking!’ thundered Per. ‘Our man, Alexander Kristoff, came second today!’.

Well, that told me, I thought us Brits were master pedallers but we only had 5 cyclists on show while Norway had 6, one with the splendid name, Odd Christian Eiking (there are quite a few Odds in Oslo apparently!). The first Brit in was Geraint Thomas who came 54th.

I’m so glad I met Per and Marit as I knew next to nothing about the Tour (it was pure chance I was walking through Nancy) and being a myopic, short arse, saw even less.

I got stuck behind a phalanx of jolly but immensely tall Dutch fans (the Dutch are the tallest people in the world, fact!) So for all I knew the Dalai Lama might have won. Later I learnt it was actually an Italian, Elia Viviani, though French cyclist Julian Alaphilippe still retained the Yellow Jersey.

I took a few lousy photos but loved the atmosphere thanks to Per, Marit and a hilarious, friendly, very sozzled Frenchman, Johann, who kept singing La Marseillaise, one of the most stirring of all National Anthems – though not when sung by Johann, who sounded like Keith Richards gargling rocks.

Going the full viking with wonderful Per Gunstein Gulbrandsen, Marit and Johann

Sometimes on a walk like mine you make a great connection with passing strangers. Per, a mechanic, and Marit, who works for Norway’s Ordnance Survey, both grandparents several times over, were two such people. So open, interesting, funny and fun. It was a tonic spending time with them. These moments stay with me, keep me going.

A convoy of spare bikes

Today, I walked 20 miles via fields of wheat, sunflowers and brown, densely muscled cattle to a campsite in tiny Vic-sur-Seille, where the first rain in weeks is dancing lightly on the canvas. Magic. Night, night.

Big thanks this fortnight to John Fry and Julia Thomas-Everard for generous donations to the wonderful Alzheimer’s Society and to Darren Finley and Teresa in Epernay, to Olivier Medde at Dynamik bike shop and to Marie-Christine Landmann at Epernay Camping, all at Camping Dormans and at Camping Le Brabois in Nancy and the lovely team at Ciarus Hostel in Strasbourg, not forgetting Per Gunstein Gulbrandsen, Marit Bunæs and Johann Cavalier.

Bon courage, everyone, thanks for reading if you’ve got this far, until next time…